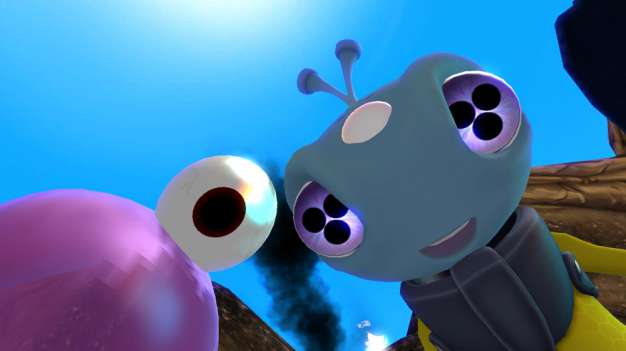 The Maw was set loose on Xbox Live Arcade on January 21, 2009 for 800 MS points. It’s an action adventure game with some light puzzles sprinkled throughout. We play as the three pupiled alien Frank who was a captive on a ship of bounty hunters when it crashes on a colorful planet filled with tasty creatures. Frank miraculously survives the crash along with a little purple being called Maw. The bounty hunters then set out to recapture Frank and Maw before the two become uncatchable.

Maw is a potentially dangerous creature that no one seems to understand but Frank. Whenever Maw eats, he gets bigger in size and power. That is the main premise behind the game. There are certain creatures such as Yums that Maw eats throughout the game, but there are others that require a strategy to consume. For example, what do we do if Maw wants to eat a Gastro but the flames that surround the Gastro keeps burning Maw’s mouth? The natural solution is to douse them in water first. Like the Gastro, some creatures give Maw special abilities that differ from stage to stage.

Some of those abilities give Maw the power to shoot flames from its mouth, electrocute enemies and become a battering ram to name a few. In order to move on in the game Maw has to eat a certain amount of creatures to grow large enough to consume future enemies. One of The Maw‘s best features is watching Maw grow larger as the game progresses. At the start of each stage Maw loses its special power it had previously but its size remains the same. We eventually got to the point where Maw reaches an unprecedented size that made us say “wow.”

Frank brings a teamwork element into the game that makes him more than just a guy who holds the leash. There are many times during the game where Frank has to set out on his own to solve puzzles. This usually involves some light platforming that’s never difficult to figure out or a drag to complete. Frank’s leash is used to keep Maw close but it can also be used to move big objects, destroy small enemy defenses or lob creatures into Maws mouth. 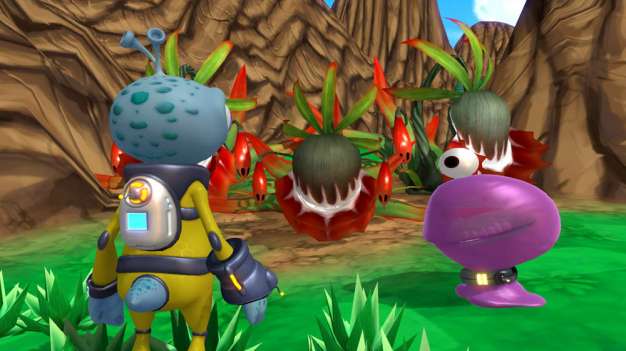 One issue that was evident from the beginning was the game’s camera. It’s a little difficult to get Frank and Maw in the same frame while keeping a decent scope of the environment. We just wanted the camera to tilt up a little more so we could soak in a little more atmosphere. There are also times where dragging Maw around is slower than we would have liked. It may be because his size was naturally making him sluggish, but when we’re trying to find that one last Yum to eat, Maw’s speed makes getting that achievement more trouble than it’s worth. Our last gripe is the game is too short. It can be beaten in one sitting and subsequent playthroughs may be required to obtain all the achievements. These complaints may seem like a lot, but they don’t break the game at all.

The Maw is a darn fine game that drips with originality. Its lighthearted and amusing nature can be enjoyed by casual and hardcore gamers alike. This game begs for some sort of sequel or downloadable content that will keep The Maw on our minds well into the future. For 800 MS points we highly recommended this game to anyone.