There are a few genres I avoid like the plague. It’s not personal bias, in fact, I don’t hate anything, it’s more a case of knowing what I’m like. If I’m sitting here preparing to tell you lot all about a title common sense dictates that I need to have played the game to a point where I actually know what I’m talking about. This is the reason why you won’t find me reviewing horror titles for you. I don’t have an issue with their existence and there are some very good ones out there but I’m a gigantic coward and will turn it off after the first jump scare. Taking this mentality to the game we’re looking at today the same theory applies to souls-likes. No, I know they aren’t scary but they are very very hard and I’m very impatient and get annoyed with myself quite easily when I suck. As a rule of thumb, I have no intention of getting good, just as I have no intention of slamming my head on a wall until it stops hurting. So with this being said, why the crap did I agree to sit down and endure the torture that is Watcher Chronicles? We shall find out very shortly.

Watcher Chronicles is, as I’ve just mentioned, a souls-like, and in true souls-like fashion, it’s hard as hell. What makes this one really bad is that it’s sneaky about it. The graphics are cartoony and inviting, the control system is simple and easy to pick up and it all feels like a really fun action-platformer. You don’t get the feeling everything is trying to eat you from the off. The first boss can and absolutely will smash you but you get the feeling you’re being punked when it gets swapped out for something more manageable after your first death. Is this a parody? Is it a play on a theme? No, it’s fucking not and I hate it all the more for tricking me.

I managed to play through the first lump of Watcher Chronicles without too much of a painful experience. I died a couple of times but I was expecting a hard-as-nails souls-like and because I didn’t get absolutely snotted by everything with a sword I thought I was doing rather well. I actually thought this was going to be the first game of this type that changed my mind on the genre. Then I walked into battle with the first creature that was bigger than everything else and got my teeth knocked out. 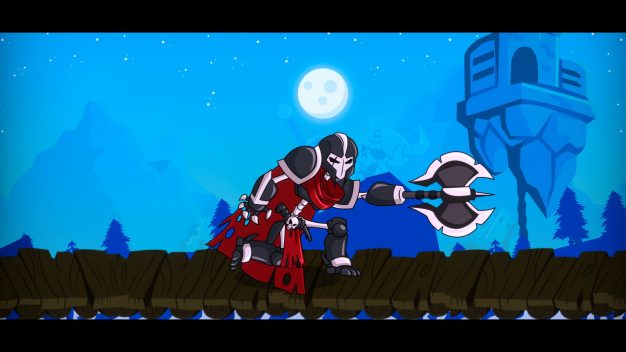 This big ugly bane of my life nearly put me off playing. It was so nice hacking him to bits.

This is where the fun ended and all the memories of not being good and having no wish to get my head kicked in until I gave up rushed back. Interestingly, and very much to this game’s credit that feeling only lasted for a short period of time. The feeling of exhilaration that you get when you finally kill the thing that’s been murdering you and progress is almost euphoric. This might just be the soul of getting good. Don’t get me wrong, I still think that phrase sucks but I sort of get it a little bit now.

I made it past the first real boss of the game, (it turns out that the thing giving me so many problems was just one of its mates,) and now I’m being killed by everything else. The weird thing is, it isn’t bothering me. I don’t feel frustrated every time I die, I feel like I really want revenge on whatever killed me and this alone is enough to make me want to press onward. The other reason I want to keep going is exploratory. There are a fantastic number of secret paths and diverging routes to find. There are so many different ways to go in Watcher Chronicles and many of these will lead you into a fight for your life, with quite a few will drop you back where you’ve already been. This isn’t a problem because they will nearly always have something hidden away that makes taking that little trip worth your while. 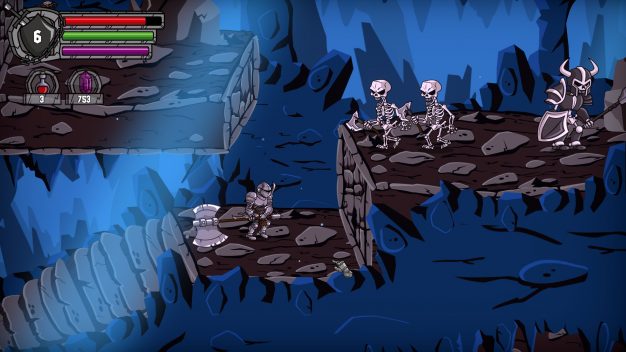 They aren’t too strong but they’re lethal in mobs.

This is a very hard game for someone that isn’t used to this style of play. To make things easier you’ll find shrines dotted about the place. These are areas that will let you fast travel to other places, renew your healing potions and save your place in the world. From someone who hasn’t played the Dark Souls series, I’m assuming they’re akin to the bonfires, you’ll encounter on that journey. The thing is, you aren’t going to know where they are on your first playthrough. My tactical head would tell me that finding the next shrine is paramount. Once you’ve done this, you can go exploring.

What you don’t want is to be fumbling about looking for one when you don’t know which path to take. I guarantee that you’ll die a lot and if you’ve traveled a good distance and not found the next shrine you’ll have a lot of backtracking to do when you get killed. This is the problem I’m finding at the moment. I’m having to go back and redo areas I’ve cleared over and over and just because I’ve made it through once doesn’t mean I won’t make a mistake and die earlier on, on another run. From someone that doesn’t like repeating themselves, this feels really frustrating. You get a map but this doesn’t tell you where things are until you uncover them so it’s not much help in this instance. 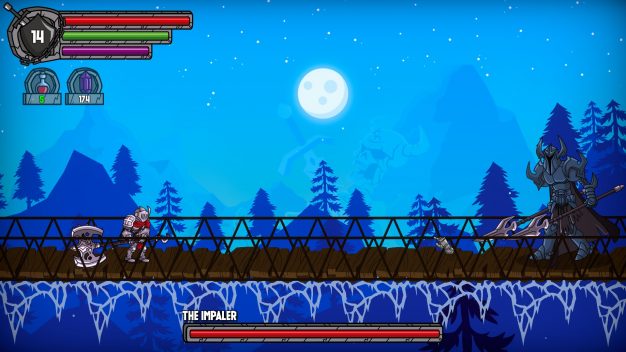 Amazingly I managed to make it past this one without getting skewered. I only had about one point of life and no health potions afterward though.

To give you a bit of an idea of the story, without ruining anything for you, Watcher Chronicles is set in Purgatory. You wake up and manage to escape your crypt to be given a challenge. To prove whether you’ve got the stuff needed you must remove a monster from a nearby fortress. Once you’ve done that you learn that Purgatory has been infested with demons, which are being controlled by their masters The Watchers. You need to find these powerful beings and return to haven, (apparently, the only place that isn’t overrun with nasties,) with their skulls. From the little I’ve just told you about my experience, this isn’t an easy task. When a footsoldier can end your existence at the tiniest slip something as powerful as a Watcher is going to give you the fight of your life so you better be ready when you finally meet one.

This is where Haven comes in. This isn’t just a safe space, it’s your hub. It’s here that you’ll refine your build. There are a series of vendors here that will help you build your character the way you want them to play. I’m going for as much of a tanky build as I can at the moment. I’m punching all my character points into strength and vitality and favoring big hacking weapons. You can just as easily fill up your dex for speed or focus if you want to launch magic about the place. This is great because it makes the game really replayable. I know this is part of the reason why people love Souls-likes so Watcher Chronicles is very much true to form. You’ll also meet other characters on your journeys that will appear here, so Haven very much expands as you go. 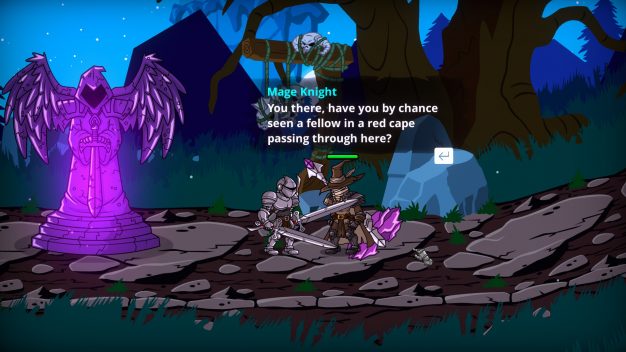 Those shrines are a godsend. Try and find them before you go exploring.

The first thing I love about Watcher Chronicles is the art style. The aesthetic feel they’ve gone for reminds me a little bit of the art in  Dead Cells, which is one of my favorite games of the last five years. The game is colorful and cartoony in a grim sort of way. I’ve always had a bit of a thing for that slightly gothic look and I wasn’t at all disappointed here. To be honest this is one of the things that caught me off guard. Just by looking at this title, you wouldn’t immediately think it was a souls-like and I sort of appreciate that.

The controls to Watcher Chronicles are very easy to master and also add to the overall sense that you’re playing an action platformer over something that requires a little bit more skill. Now I’m not saying that you don’t need to be skilled to play platform games, you definitely do. What I’m saying is that they’ve gone for a more simplistic arcade feel. The fact that I could play comfortably with my keyboard adds to this. I wouldn’t touch most souls-like games with anything other than a controller because pinpoint accuracy is often required and I don’t think you always get that with just your keyboard and a mouse. It feels like you’re playing something almost entry-level, something that’s been designed for newcomers to the genres and this is great. 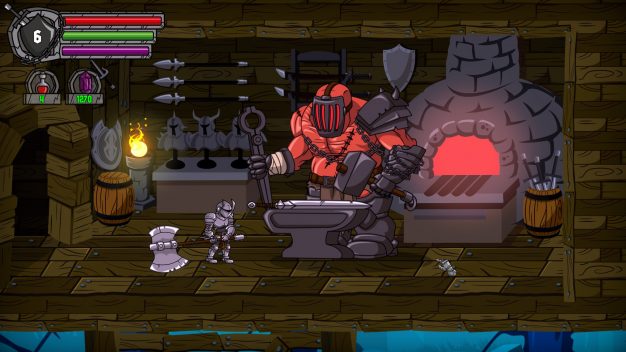 My only issue and this isn’t with the controls as such, is that it’s very easy to kill yourself off if you aren’t careful. Dealing with flying enemies can be a bit of a pain especially if you’re on a high platform. Depending on the weapon you’re wielding, a combo can carry you over the edge and if you’re in the air it’s a lot harder to right yourself. Fall damage is a very real thing in this game and I’ve died so many times just because I’ve overreached slightly. Now I’m blaming myself as much as anything for this but it felt easier to do than it should have been.

Watcher Chronicles is everything that I fee a Souls-like fan would want and more. It’s hard, it’s really customizable and there’s a hell of a lot to find, see, and do. I think it might also be a really good entry-level for those of you that, like me, are really just dipping your toes into this genre. The difficulty is definitely there and a lot of patience is going to be required if you are to really come in fresh and feel comfortable continuing. The thing is, nothing feels insurmountable. Once you face your first really big challenge and finally beat it you’ll change your mindset and just want to keep going. Souls fans will get this but for us newbies it’s definitely a feeling that’s worth experiencing. 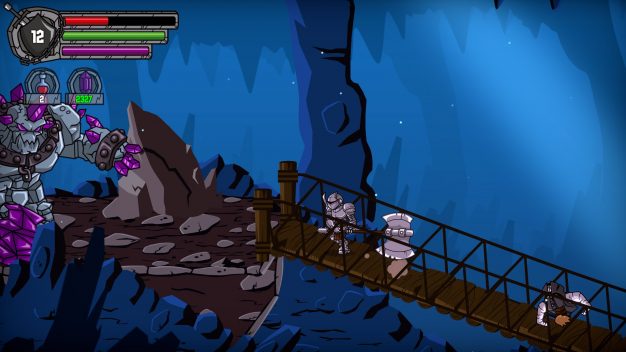 I never thought I’d say this but I think I might want to sit and complete this game. You’ve done something that no other game has been able to do Watcher Chronicles, you’ve made me change my mind on something that I’ve been really stubborn about for years. If this has managed to do that, it’s pretty bloody amazing. On this strength alone, I think all I can do is recommend this title. To old souls and new ones alike.

Watcher Chronicles is a really hard game. If you have absolutely no patience or rage easily you might want to steer clear here because you will die, a lot. If you’re a Souls fan, are looking for a challenge, or are willing to keep at it until you prevail there is a lot of fun to be had. This game is a nice entry into a difficult genre but it’s definitely no pushover. The difficulty is really the only potential negative here, everything else makes for a really tight, fun-to-play, platformer.