Tokaido was originally released as a physical boardgame designed by Antoine Bauza and published by Funforge. The game is a worldwide success, having sold more than 350,000 copies and has been translated into 16 languages. I have personally played Tokaido, the original board game version, on many occasions and was very interested to see how it would work in digital form.

In Tokaido, you are a traveler in the heart of ancient Japan, walking the legendary East Sea road from Kyoto to Edo. While the game is competitive, the core theme is making the trek as fulfilling as possible. Throughout the game, you discover and paint magnificent panoramic landscapes, indulge in the finest Japanese cuisine, acquire rare and precious souvenirs, visit temples, meet other travelers, and bathe in hot springs. Tokaido is a rite of passage for the heart, walking in serenity and contemplation…while contemplating the swift and brutal downfall of your fellow players.

A game of Tokaido is comprised of three stages. Each stage is made up of a section of the East Sea road, punctuated by intermediate inns and capped off with one final inn at the end. Along each section of the road, there are shops, hot springs, painting spots and more, as outlined earlier. From your starting position, you can move to any spot on the road, so long as it isn’t already occupied (the intermediate inns don’t count, as everyone must reach the inn in order to proceed to the next section). Stopping points on the road have one or two spaces, meaning that only one or two players can stop there during that turn. These space limitations form a core part of your strategy, as you are able to plan ahead and choose places which benefit your character, block your opponents from progressing in their objectives, or both. 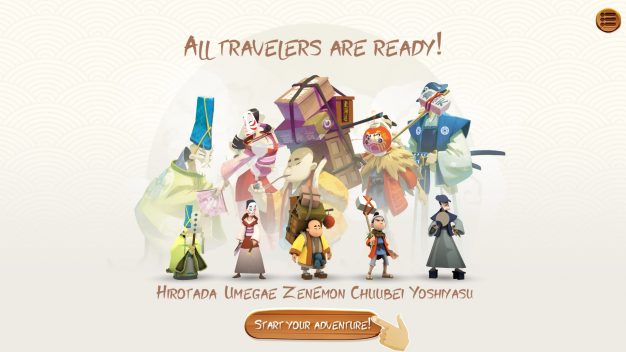 In single player mode, Tokaido gives you the option of any of the eight characters. Each character has their own unique design and perks which will shape your strategy. For example, Hiroshige gains the player’s choice of a piece of one of the panorama paintings every time he reaches an intermediate inn. Knowing this, a player controlling Hiroshige could feasibly pass over one of the limited painting spots on the road in order to block their opponents from bathing in hot springs.

There are many ways to earn victory points in Tokaido, based on where you stop on the road. Most actions will net a few victory points by default, while others will have combo bonuses or game end bonuses for engaging in certain actions the most or a certain number of times.

Shops: Buy souvenirs in different categories to make sets.
Temples: Donate 1-3 coins to the gods to receive an equal number of victory points.
Encounters: Meet another traveller NPC on the road and receive a random benefit (i.e. a painting piece, a souvenir)
Hot Springs: Gain 2 victory points, or 3 if monkeys randomly appear.
Farms: Gain 3 coins (can be spent on souvenirs in shops, food at inns, and as temple donations)
Panorama Spots: Gain a piece of a panorama painting to make a full set (mountain, rice paddy, or sea)
Inns: When you reach each intermediate inn, you are given several meals to choose from, each with different prices. By eating a new dish at each inn, you automatically obtain 6 victory points. At the final inn, your scores are tallied and bonuses are applied. 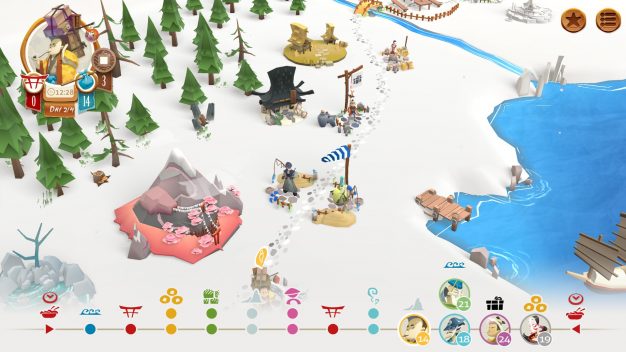 Turn order is important. If you decide to strike out ahead on the map ahead of everyone else, you will be the last to move on the next turn. Likewise, if you’re the last to reach an inn or move the least and are at the back of the group, you will get to move first on the next turn. If you are the last to reach an inn, you will only get to choose whatever food is left over, which may result in you only having previously-eaten options, or options that you simply can’t afford. It’s very important to balance where you need to visit on the road and whether you think you’ll be able to get in before the other players.

With the summary of how the game works out of the way, let’s move on to the digital adaptation. While I was a bit wary of how the game would work as a videogame, I was pleasantly surprised. A large part of Tokaido’s appeal is its crisp, traditional aesthetic and large amounts of white space, splashed all over with bright color. The digital adaptation didn’t disappoint, as the signature white space and bright colors were there, just as crisp and juicy as ever. The 3D rendering of the characters and locations along the road remained true to the original board game and were very easy to identify. 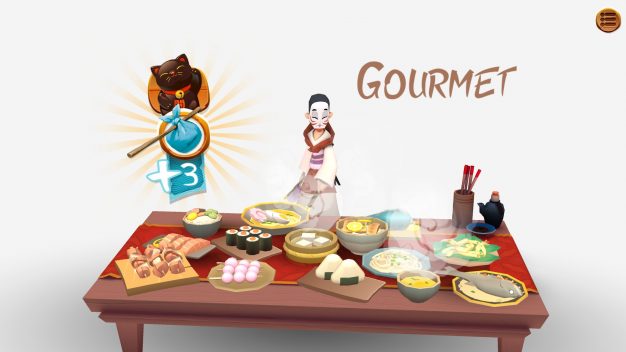 In terms of the animation, I only encountered one instance of one of the character models glitching out, but this was only for a brief moment and didn’t impact the gameplay. The settings also have a “Fast AI” mode. I didn’t employ it because the game is pretty relaxing, but it’s good to know that you can speed things up if you don’t feel like waiting for each character to make their trek along the road.

I can’t fault any of the animation and graphic design in the menus or in the actual gameplay – it all looks beautiful and is a loyal adaptation of the original board game’s aesthetic.  Tokaido‘s soundtrack was specifically composed for the game, and while I wouldn’t expect it to win any awards, it perfectly captures that old Japanese ambience and atmosphere. The sound effects are fun and bright and are well suited to the gameplay. 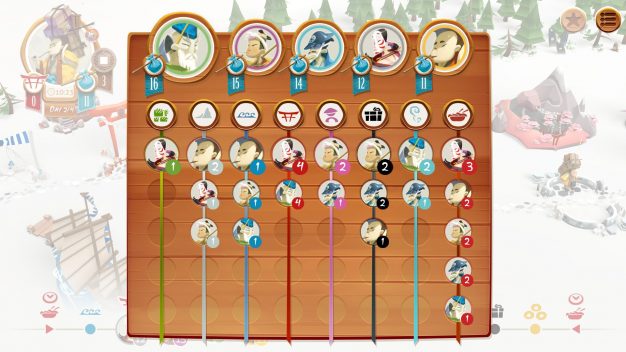 However, there is one key difference which was unique, but rubbed me the wrong way a little: Each player only gets a choice of two characters, selected at random. You can view the special perks for each character and then choose one. The next player is given two new characters to choose from in the same fashion. I think this is an interesting idea which would force players to try new characters from time to time, but ultimately I would have preferred to have the option of choosing from the full cast. 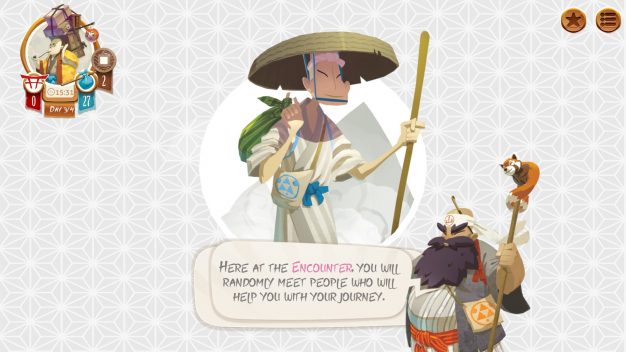 There are two nice new features in the digital adaptation that would have been things to remember yourself in the original board game version. The first is the ability to bring up your character screen and view your character-specific perk and your belongings. You can also access another menu which outlines the current allocation of victory points and which players have earned how many points in each area of the game (i.e. souvenir collecting, shrine donations).

In multiplayer hotseat mode, when my boyfriend tried to check out his character’s personal stats screen, it came up with my character’s screen instead. No amount of exiting and re-entering the menu gave him his character’s information. This may be a bug that requires fixing, although the game is simple enough that you typically wouldn’t need to use this menu anyway. 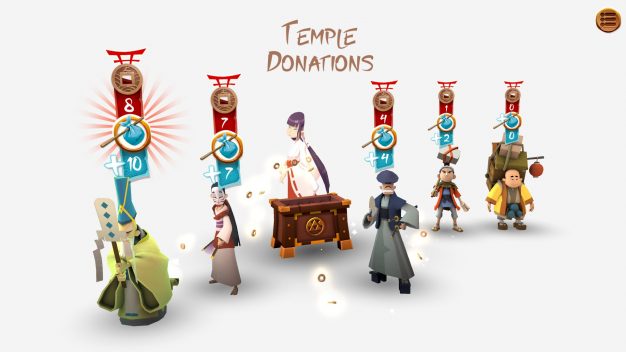 While I didn’t try the online multiplayer, it appears that you have to sign up for a free account, after which you can play with others from around the world. Having thoroughly enjoyed both the board game version and the digital adaptation, I would be willing to pay the reasonable $10 USD for another copy of Tokaido so that my friends in other countries (or even just in other houses) could play along with me.

Tokaido definitely gets my recommendation – both the original board game and the digital version. While the original Tokaido began to wear a little after many, many games over a short period of time, that was predominantly due to the fact that we kept selecting the same characters and utilizing the same strategies. I think that, while I didn’t like it so much, the implementation of the randomized character selection for multiplayer may help to combat that. Tokaido is heaps of fun and pretty to look at – why not take it out on a date and get to know it yourself?

On the road again