The Trials series has gone through a lot more changes than one might think. Starting with Flash games, the series grew from simple 2D PC downloads to more fully featured console games, eventually spending some time in the realm of science fiction with Trials Fusion and Trials of the Blood Dragon. Having greatly enjoyed those two titles, I was wary of the newest edition, Trials Rising, returning to a more realistic environment. But I was excited that it would be on the Switch for the first time, and I always love returning to the smooth riding and physics-based precision that I first experienced in Trials HD. But with all of the new changes this time around, will Trials Rising raise the bar, or will it crash and burn like its riders? 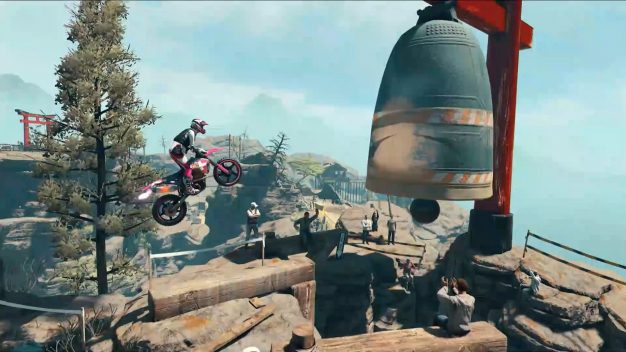 First, I want to talk about the somewhat controversial changes to the layout of tracks and challenges compared to its predecessors. Your task is no longer just to complete each track with the best time you can achieve, nor can you unlock new tracks this way. Instead,you unlock new tracks and bikes by completing a series of “missions” and leveling up. There may be multiple missions for each track, and multiple tasks for each mission. While I like the idea of having specific challenges in addition to completing the track, I don’t like that they’re mandatory; Trials benefits from a simpler progression system, allowing players to focus on the track and not worry about keeping track of other things unless they want to. The Challenges in Fusion were, I think, a better implementation of this idea. What makes this even worse is that you’re almost always racing against one or more ghosts. Sometimes the challenge will be to beat a ghost, but even when it isn’t, they’ll still be there. You can make them invisible during gameplay with the settings, but the game will still show your ranking among them at the end of every track. It’s not a great feeling to finally beat a tough level, only to be told that you came in 4th place. Worse than that are some of the victory animations that play; imagine the scenario from before, except that in addition to coming in 4th place, you have to watch the winner slap their butt while an obnoxious sound plays. That’s a disturbingly common occurrence. I know that Ubisoft is aware of these issues, and they have responded particularly about the annoying victory animations, so I hope at least that part is fixed soon. 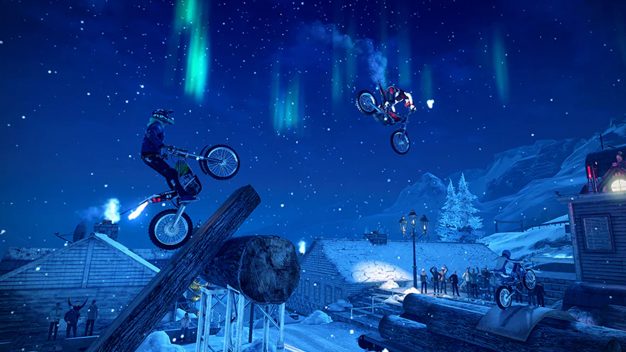 Despite all of that, the core gameplay is the same as it’s ever been. It’s all about using leaning and throttle control to get through difficult tracks, and some of them are insane. As is typical for Trials, you will find something of a difficulty spike once you unlock the Medium stages, especially given the new mission system; there, you’ll need technical skill more than speed. The good news is, there’s a new tutorial mode in Trials Rising that proves to help greatly. There are several tutorial tracks that unlock throughout the game, hosted by internet personality Professor FatShady, known for his long running “University of Trials” video series. After a video explanation, players are taken to a training course that provides progressively more difficult obstacles based on the topic chosen. You can also ask the “Professor” for help at each obstacle, which can sometimes make a major difference. I do wish these didn’t have to be unlocked, and it’s a shame this depth of tutorial isn’t given for the very robust track builder, but it’s great to have all the same. What disappoints me in the general gameplay, though, is the removal of several fun features from Trials Fusion. You can no longer perform tricks, nor can you ride an ATV. I realize the latter is not so big a change, but I very much enjoyed the TKO Panda in Fusion. There also isn’t really anything new to replace these features; the closest you’ll find to a new gameplay element is the co-op tandem bike. It’s odd, because it seems like the developers are trying to both take Trials back to its roots and change it up significantly at the same time. 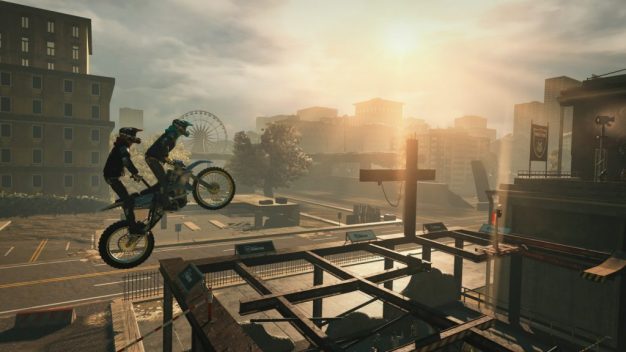 The tracks exhibit these dual goals as well. They’re based on a number of real world locations (some specific, some general), so they tend to be more realistic than you’d see in Fusion or Blood Dragon. All the same, there are a few off-the-wall tracks that I really enjoy playing, such as a Hollywood level where the movie sets briefly come to life, and an in depth tour of a theme park. It’s also cool to see tracks based on iconic locations like the Eiffel Tower and the Colosseum, but most of the tracks aren’t so specific. This doesn’t necessarily mean they aren’t fun to play, of course, but there’s rarely much of interest to look at. This is obviously going to be a point of contention; I know some players prefer the more realistic stuff, and that’s totally fine. The visuals are great, and there’s a lot of detail, but I personally feel a lot of the tracks could be more interesting. 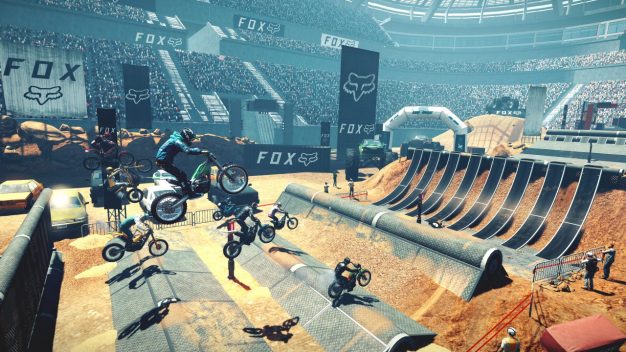 Since we’re talking about visuals, this would be a good time to address the elephant in the room: I said in the first paragraph that I wanted to play Trials Rising on the Switch, but the title of this article shows I actually played it on the Xbox One. Unfortunately, the Switch port just isn’t up to snuff. The visuals have been toned down a lot, more than they probably needed to be; it seems like the porting team just removed assets until it started to run smoothly rather than really trying to present the full game. The Switch version also runs at 30 FPS, which doesn’t really bother me, but is a major problem for some Trials players. But it wasn’t the visuals that pushed me away from the Switch version at all; it was the controls. None of the Switch controllers have analog triggers. This may not matter for most games, but analog throttle control is absolutely integral to the gameplay of Trials. The devs worked around this by using the right thumbstick for throttle, and if this is your first time playing Trials, that might be fine; but if you’re a veteran, that will be tough to get used to. I do have to give them a lot of credit for allowing the use of Gamecube controllers, which do have analog triggers, but that sort of negates the Switch’s trademark portability. 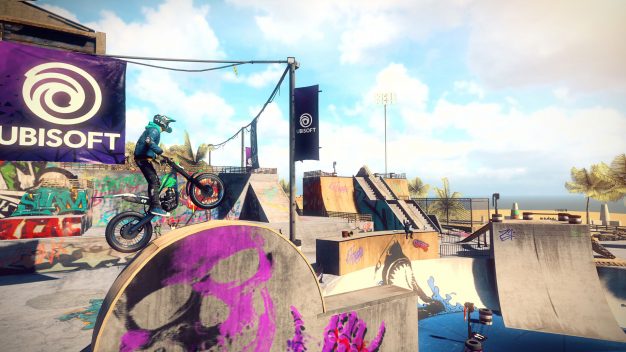 It’s going to be interesting to see how Ubisoft deals with Trials Rising in the coming months. Longtime fans are not happy about the changes they made, and since some of these changes are pretty core parts of the game, I’m not sure what can be done about them. Similarly, I can’t be the only person disappointed by the removal of the trick system and other smaller changes. For now, Trials Rising is perfectly adequate for average series fans looking for some new challenges; it doesn’t introduce anything new in the gameplay, but it continues what the series has always done well. It’s also a decent entry point for newcomers thanks to its tutorials. But if you hold these games to a higher standard, or if you’re turned off by the changes they did make, it might be wise to wait and see if Ubisoft responds to these complaints.