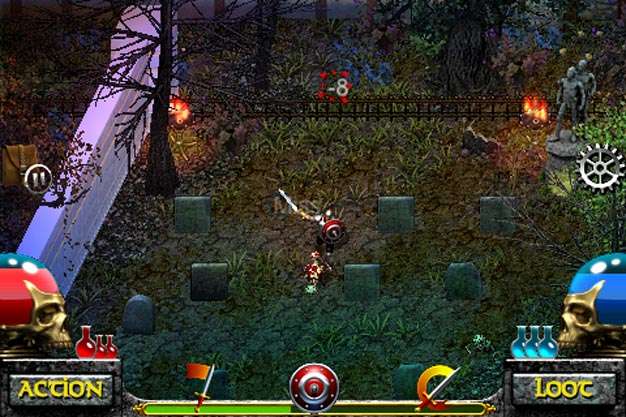 Underworlds is a hack-and-slash RPG from publisher Pixel Mine that is more or less a mobile version of Blizzard’s classic, Diablo. It’s pretty much the kind of game I’ve been waiting to show up in the App Store since it launched. You play as a lone adventurer whose recent tour of caravan protection has come to an end. The good news for you is the nearby townsfolk of Albrect are under siege by the undead and they need a hero — gotta be strong, fast and fresh from the fight — which means plenty of loot, bloodshed and thwacking noises.

If you’re familiar with Diablo you’ll feel right at home with Underworlds as if it were an old pair of sneakers…minus the smell. You roam about the environments in a fixed isometric view by either tapping where you’d like to go or navigating with an on-screen omni-directional pad which actually works really, really well considering the screen real estate it’s given. Thankfully the areas you find yourself in are rather easy to get around in since there’s no map of any sort, but getting lost is almost impossible.

The enemies, none of which are even slightly shy, will run up to you en masse and beat you with a proverbial bag of hammers. Slaying them will net you some rad loot which is labeled for easy detection and pickup (hitting the “Loot” button will snatch up all nearby trinkets quickly) as well as XP and plenty of combat-related health loss.

Two skulls, one on each side of the screen, represent your health (red), vitality (blue) and how many potions you have banging around for each. When you’re low on either the device will vibrate as a warning, reminding you to tap whichever skull necessary to replenish. It’s a really nice system that’s easy to work with and the added vibration warning is extremely helpful. 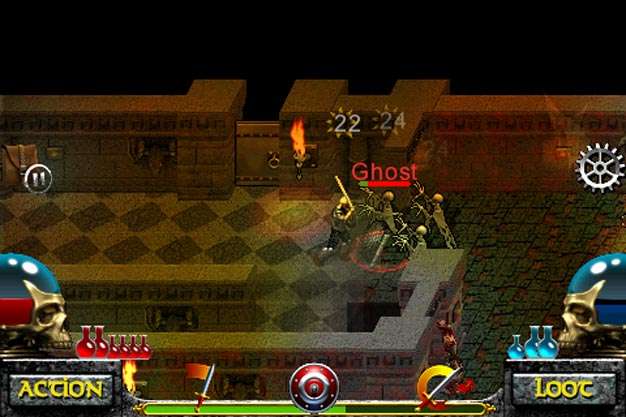 The RPG basics come out and play with the leveling system allowing stat boosts to enhance damage, total health, defense, etc. and feats which are special attacks that can stun a group of nasties, damage them or give permanent health/vitality boosts. Equipment you find from killing things that need to die give further enhancements which can dramatically affect your badassedness. One of the downsides is there aren’t multiple classes to choose from nor are there a lot of feats to play with so what you see is what you get.

To be blunt, Underworlds is an absolute blast. While it’s nothing new to the scene, the ability to play a Diablo-esque dungeon crawler on the go is flat-out awesome. The game could do with some improvements here and there such as the addition of music (coming in future update), a deeper skill system and more classes to choose from, but these are only minor gripes. It’s a perfect showcase for how to do a mobile game right with slick, responsive controls, ability to save anytime (auto save on quit or when you get a phone call) and an automatic pause when a text message or low battery prompt pops up. With around 3 hours of gameplay, multiple difficulty levels and surprisingly sharp, witty dialogue it’s an easy buy at $5, let alone $3. Underworlds is a game that will loot your heart and have you coming back for more.