Almost all of the arcade platformers coming out nowadays requires you to always rush and get to the goal as quickly as possible. However, indie developer Roofkat wants you to somewhat stop and smell the roses with its debut game called WarpThrough. The catch? Well, you still have to rush, but you can’t just keep spamming attacks with a press of a button. You actually have to pause to charge your attacks.

If charged attacks seem like it’s not that bad, think again; WarpThrough places you in a small arena, full of pits and platforms and constantly spawning monsters in your direction. Luckily, you don’t have to worry about dying from falling in pits, since they’re just loops to the top of the arena. What sucks, however, is that there’s no double jumping.

The object of WarpThrough isn’t to kill the enemies in the arena. It’s actually getting to the green warp points that are also spawning around the map. Every time you get to the warp point, you earn warp energy. Collecting a number of warp energies in subsequent runs enables you to purchase powerups. There are two of them: extra lives and a small field around you that slows time for monsters who are near it. 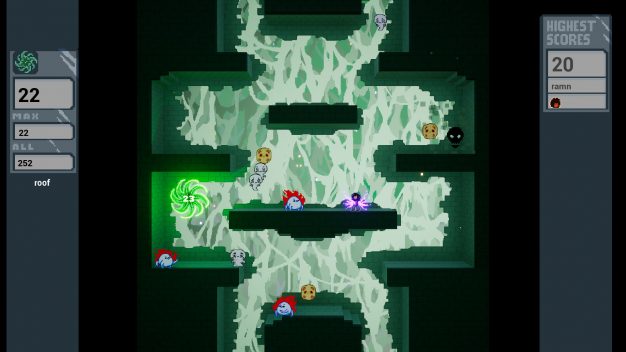 The only way you get a game over in WarpThrough is by getting hit by a monster. Thus, the time field is a great powerup, since it allows you more time to dodge an enemy or give you that extra time to charge an attack. Attacks are not all the same, by the way. After playing through the main story (a short 1-2 hour endeavor with an endearing story), you unlock all the playable characters for the arcade.

All in all, there are five characters: Charlotte with her fiery arm, Three with his sniper rifle, Ebbie and her puppy pal named Ball (who serves as the game’s charming mascot), Manor with his electric traps, and a secret character playable at almost the end of the storyline. Charlotte (or Char for her nickname) is obviously the novice’s character in WarpThrough. Her charged attacks send flames straight to the direction she goes. As long as you’re constantly pausing to charge attacks and don’t let her get too inundated with monsters, she will be the perfect character to learn the ropes. The other characters, however, have their own strategies. 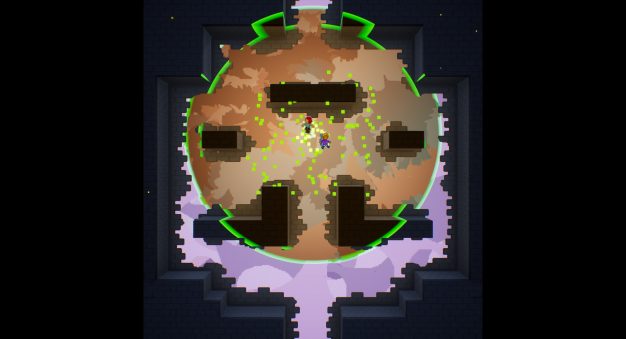 For example, while it may seem that having a sniper rifle makes Three is a great choice for taking out monsters long distance, it’s his aim that’s a problem. First, not only do you have to charge his rifle, it then rotates clockwise (then counterclockwise at the next charge) for you to aim his attack. Second, it seemed to me that his long-range attack has a very slim hitbox, since most of the time, monsters weren’t getting killed, even though I aimed at it perfectly.

Manor, on the other hand, is the complete opposite of Char; his charged attacks leave volts of electricity where he goes. He is a character more for strategy rather than aggressive takedowns since he will likely to get killed if he rushes to a monster. Ebbie is the complete antithesis of the game; she has to constantly move for Ball to attack. If Ebbie stays still for a short amount of time (i.e., charges her attack), Ball takes a nap and leaves her completely unguarded. Ebbie also doesn’t get to aim Ball towards where she’s going, but rather Ball randomly chooses monsters to attack. 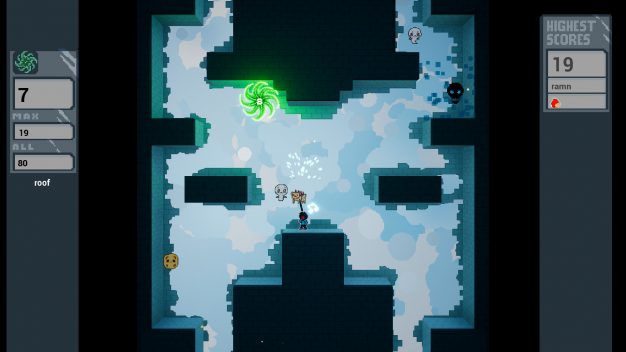 WarpThrough definitely falls along with the arcade platformers that definitely require skill and strategy, but with a simple premise. It allows you to pick a character that fits your playstyle and see how much warp points you can get through without getting defeated by monsters. This is one of those games that are quick, fast-paced, easy to learn, but hard to master.