When you envision post-apocalyptic America, what do you think of first? Is it the clouds of radiation permeating the landscape, choking plants and blotting out the sun? Mutations in animals and humans exposed to radioactive isotopes becoming monstrosities to reckon with? Or maybe you think that we just wouldn’t survive such a deadly, violent force that is the nuclear bomb? If you chose one or all of these answers, you’d be correct, and the reality is that surviving will be a bitch.

The post-apocalyptic RPG Wasteland 2 forces you to fend for yourself in a world where water and supplies are limited, and the dangers and risks are incredibly high. So yeah, a bitch. Wasteland 2 is the sequel to the 1988 game Wasteland, to which the Fallout series was seen as a spiritual successor when it first hit the CD-ROM in 1997. The game was successfully funded via a Kickstarter campaign back in 2012, and after a delay in its release, Wasteland 2 hit the digital shelf on September 19, 2014. It is incredible to think that this official sequel got its release 26 years after the original. 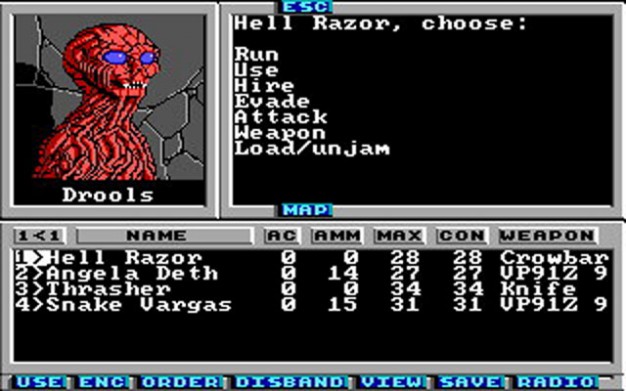 Let’s just say the sequel has come a long way.

Something that is apparent from the start as that this game feels like it could have followed up Wasteland by the look and feel of the game (minus the HD graphics and sound). It starts with a live-action cut-scene. Yes! A live-action cut-scene that does a great job of introducing the scenario of the game! I commend the director, because thinking back to some live-action scenes from games of yesterday, it never hit the levels of cheesy or gimmicky that many of us recollect. IGN has courteously uploaded the opening cinematic, so you should check it out real quick to get a good idea of the story. I’ll see you on the other side.

So you play as a group of novice Desert Rangers that are on their way to earning their badge to make it official when one of your brothers is mysteriously murdered. You decide who you will bring with you during your treks through the desert when you first start the game, choosing between pre-rolled characters or making up your own creations. You will select four playable characters, and can have up to three NPCs join you at any time. For the sake of this review, I chose a group of some of the pre-rolled characters that offered a balance for surviving. Or so I thought. Each character comes with a back story, and you can also write up your own stories for the characters you create. Love it.

After the initial dialogue with the Desert Rangers leader General Vargas, and subsequent encounters with the citizens of Arizona, dialogue is well written and entertaining. These conversations will lead you on your way with words that are emboldened, opening you to further the dialogue trees that can lead you to use one of your dialogue traits to solve the issue at hand, or grant you a side quest to follow up on. Because I had gone with a pre-rolled character set, Slick has the ‘Kiss Ass’ trait, which helped in divulging information, and sometimes avoiding combat. I luckily had another character Widow who was a ‘Hard Ass’, which helped in intimidating individuals. 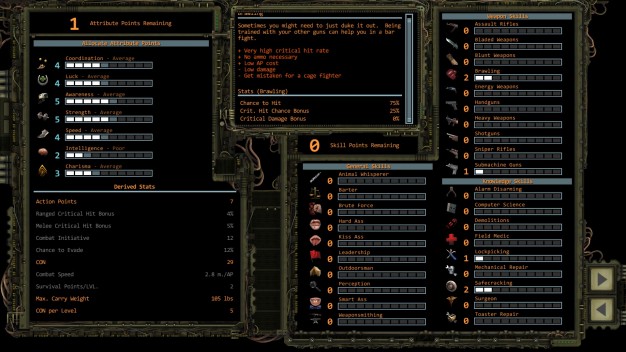 Characters are based on the similar mechanics that Fallout players will recognize. You have attribute points and skills that will influence what your character will be good or poor at performing, and allow you to focus each party member on certain skills that will increase the likelihood of you surviving the next bandit attack. The combat is turn-based, and Action Points are what drives each of these combat encounters. Moving around, crouching to increase damage and evasion modifiers, firing and reloading your gun – all take up AP. This makes strategy the key to each encounter.

An overworld map gets you around in a general sense, with strategic stops at oases for water and figuring out paths to avoid radiation or physical barriers like mountains. The overworld map can also spawn encounters with enemies or merchants, to which you can choose to escape (with a chance of getting caught) or engage. When you reach your destination, and adjustable isometric camera view takes over, much like Dragon Age. There are areas to explore, treasure to find, enemies to fight, and NPCs to engage as you wander around these areas completing quests. 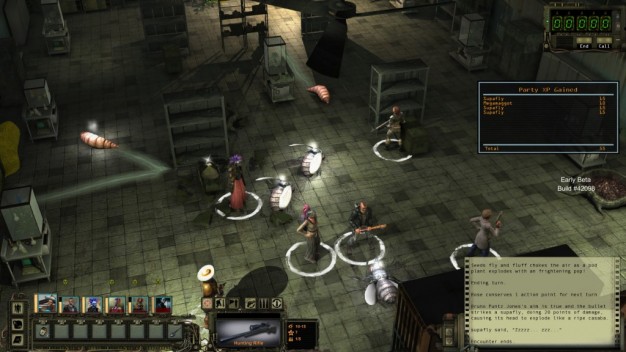 Gotta get down on those Supaflies!

At a little over 15 hours in at a game that is 50+ hours long, I have had my fair share of fun and frustration. The game is difficult, and starting with my pre-rolled group left some undesirable challenges. No one person was a true specialist, and as the game went on, I had to further tailor them to fit the mold of making surviving encounter after encounter feasible. One quick realization is that if a character dies, they are dead. You have a limited time to revive them, so you better have someone who can accomplish this (ie. a Surgeon). You will die and you will need to reload your save games, so save often. Nothing like losing an hour of progress because half your party was wiped out and you have little money to buy a surgery kit. And yes, supplies are very limited in the sense that things are hard to come by in post-apocalyptic America, and inflation has definitely taken effect.

In the end, Wasteland 2 is a challenging game that offers everything an RPG fan will love. The graphics aren’t top end, but who cares? The game is solid, with over 50 hours of gameplay and a good price point at $40 on Steam. There are bumps along the way in your journey, but understanding that the game will be a challenge from the get go should have you ready to take on whatever comes your way.

Radiation burns aside, it's a welcome return to the wasteland!

This long awaited sequel to the post apocalyptic classic does more than survive – it thrives.