I can’t remember the last time I played a game that made me cringe. I totally don’t mean this in a bad way in this instance but the feeling of my stomach screwing itself into a ball is one that I think I’d rather leave outside of my gaming life. The game is White Shadows, it’s a platformer and I didn’t think I suffered from Vertigo until I started playing. I’ve learned something new about myself and now I’m going to explain to you why you need to play this game with one eye closed while telling you whether it’s any good. Let’s get on with it then, shall we?

The first thing to mention is that White Shadows isn’t a game that’s going for clever mechanics and parlor tricks. The thing about platformers is that they usually need to be doing something new and innovative to draw us in. The reason for this is that this is a genre with some pretty basic gameplay at its core. It’s literally a huge library of games that are centered around getting character A to point B. This being said, there needs to be a hook to make us pick one game over another. White Shadows has allowed the simple platforming to speak for itself, mechanically there really isn’t a lot to tell you here that you don’t already know or haven’t already experienced. So why would you want to play then? Two reasons; the story and the aesthetic. The gameplay is more of a vehicle here for everything else so we’re looking at a full package rather than parts of one. 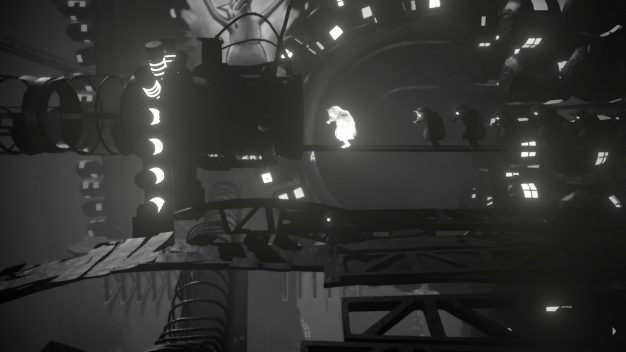 You can be a raven and be vilified or a pig and live in fear. Either way. life is not pleasant.

White Shadows feels like a one-way trip into an Orwellian nightmare. This is Animal Farm, meets 1982 with a bit of CyberPunk flair thrown into the mix, (the genre not the game.) The world you are in is oppressive and extremely dystopian, It’s dark, dirty, and full of pigs. You have committed the crime of being different and the story centers partly around what society does to those that don’t toe the line and what shady politics can do to vilify a group of people to strengthen its own agenda. The themes that White Shadows embraces are as dark as the setting and I’m not going to go into them here. What I will say is that if you’re going to embrace this story you need to be prepared to feel lots of emotions, not all of which will be pleasant. 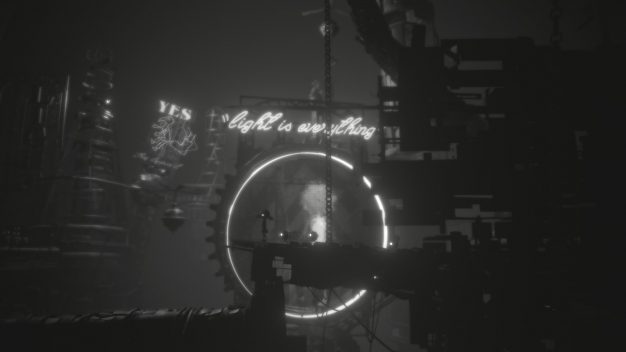 So why did White Shadows make me want to remove my stomach and set it to one side? Never had the phrase, “don’t look down,” been more apt than here. When you’re making a jump for a ladder that you’re not sure you’ll be able to reach and that ladder is suspended over nothing you’ll get my drift. One thing this game does almost perfectly is make you think you aren’t going to be able to make the jumps that you need to. It also instills a sense of urgency in a very clever way. Using a vertical train track as a ladder is actually quite a clever thing to do. When there is a high-speed train on that track this is more a case of flirting with disaster. So do you get a choice in the matter? Course you don’t! That feeling of “I can’t look” is one of the things that makes this title so great. Speaking of trains … I’ve had the train journey from hell now and I really don’t want to go near another one for the rest of my life, thanks. 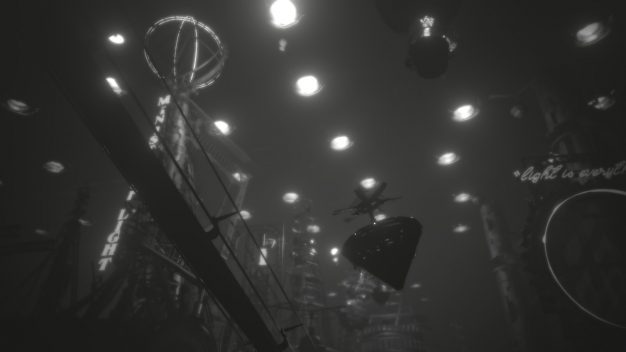 Are those spotlights in the sky?

This brings us very neatly to the graphics. White Shadows is absolutely gorgeous. It’s like playing through a film noir. Everything is in black and white and wherein other games this would detract from the overall experience, in this particular one, it makes it. Light and light play is also integral to the story. I’ll not explain why but you’ll realize quickly enough that this isn’t just being used as another game mechanic it’s actually very important to the overall plot. There is a wow factor about virtually every location you’ll come across, whether it be one of trepidation because you really don’t want to go roof surfing or one of awe because everything is just so damn gorgeous there’s a lot to love here. As a side note, the music is really cleverly thought out both in the use of score and more importantly in some cases the lack of it. 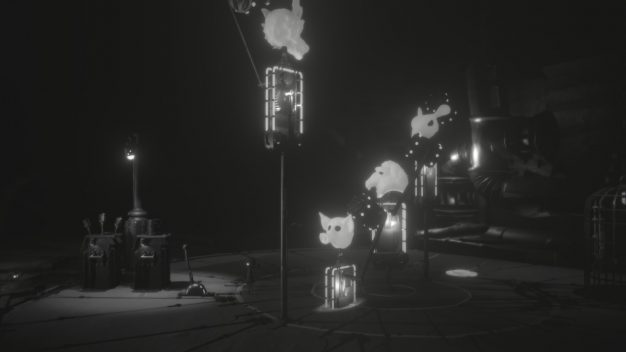 The puzzles are just the right difficulty.

The puzzles in White Shadows are just the right level of difficulty for the game. These areas are a welcome break from all the platforming without taking you out of the zone completely on account of them being too difficult. These are the usual sort of puzzle platform fayre in that they see you moving blocks, power switches, etc. Once again I’m not meaning for this to be a criticism, this isn’t the sort of game that needs innovative puzzles. This comes back to my point earlier of looking at everything as a package and they have their place and do their job perfectly. It’s very much a case of they are what they are. 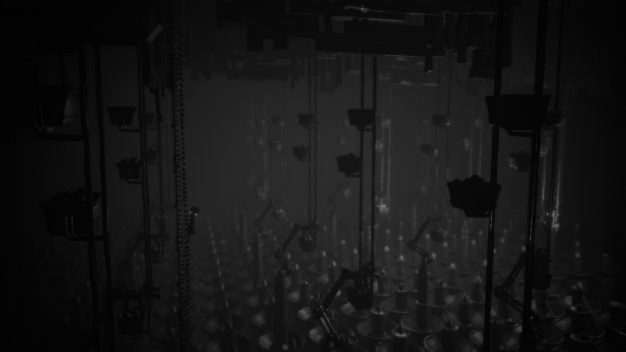 Everything in this game is worth seeing.

White Shadows isn’t perfect. This game is going to disappoint players looking for something entirely new. Once you get a feel for what’s going on mechanically everything is pretty standard. Saying this, I think looking at the game purely from a gameplay perspective is doing White Shadows a disservice. This is a brilliant indie title with an intriguing story and a beautifully dark world to explore. In addition to this, we aren’t looking at a £60 triple-A blockbuster here. I think for the princely £16.99 this game will cost you you’ll get a lot of value for money if you’re having a break from those endlessly replayable titles and want to take part in a bloody good story instead.

Daring to be dark

White Shadows is a game that is very much the sum of its parts. I would class the individual aspects of this title as being good but not necessarily outstanding, (apart from the graphics which are gorgeous.) What this game does very well, though, is taking a bunch of things that could be classed as pretty average and combining them into something truly great. If you’re looking for something completely different and innovative I’d probably steer clear here. For the rest of the platform fans looking for a new tale to experience you could definitely do worse than this one.