When we talk about genres known for their difficulty what springs to mind? Soulslikes, right!? Right! Yes, I agree entirely with you. These games are rage-inducing, nightmarish manifestations of people’s minds that make the average sadist look normal. These games and all the “get good,” that comes with them are enough to give any straight-minded gamer who doesn’t like the idea of making deaths a hobby a migraine. This isn’t the genre we’ll be discussing today though. What else? Roguelikes? Well, this is my genre so I can attest to it being all things completely insane but no. This leaves us with the Bullet Hell genre. If getting shot to bits by far too much happening all at the same time is what floats your boat, then you’re going to love today’s game. I’ve been playing Wildcat Gun Machine. I have sore fingers and I think I might have just grown an extra set of eyes but I’m having a ball. Let’s find out why shall we?

What I adore about Bullet Hell is that this is a genre that’s right out of the arcades. These games always take me back to being about 12 and sticking my pocket money into something that was probably way above my skill level. I usually lasted about five minutes before I saw the word “continue,” flashing on the screen, but I was always having so much fun that more money was destined for that slot. Many of these games were the forerunners of what Bullet Hell is now. These weren’t games that involved in-depth stories. You were given a character, three lives, an arsenal of weapons, and a hail Mary. You went for it and you hoped for the bloody best. Wildcat Gun Machine, though not quite as brutal definitely harks back to those days and I’m totally here for it.

There isn’t a lot of story to this game. You teleport into an alien base, (or ship,) and have to wipe out room after room of murdering monsters while finding and buying gear and upgrading your own skills in the hope that you’ll stand a cat in hell’s chance, (pun intended,) of getting through alive. Pain is very much the order of the day here. Your enemies appear in waves and often when you think you’ve just offed the last beasty another bunch teleport in and make you an ex-heroine. This is the bittersweet joy that comes with Wildcat Gun Machine. You’ll have a lot of fun retrying that room that’s just ended you but you can never get comfortable; some of those areas have more waves than you’d expect and all of them are lethal. 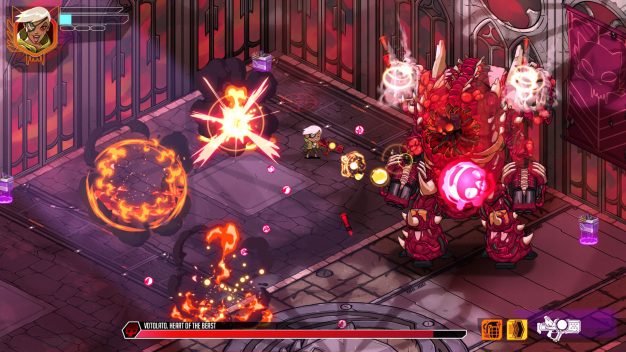 Each zone has a basic formula to it. Imagine a large map that’s broken into colored sub-zones. These are locked off with keys that are also color-coded. All you need to do is find the keys to progress. Each level also has two sub-bosses that you’ll need to face if you’re going to move forward. These bosses are guarding an altar of sorts that you’ll need to blow the crap out of. Each altar is a key and when both are destroyed the boss door unlocks. Then all you need to do to get to the next level is beat the boss. It’s all very simple really. Isn’t everything, though?

The basic enemies are a serious problem without even taking the sub-bosses and bosses into account. These can be broken down into their own rough classes. First off, you have swarms that will try and mob you. These are usually more of an annoyance than anything else but they’re a real problem because they’ll take your attention off the bullet-flinging baddies that will spawn in behind them. Different enemies shoot different configurations of bullets and when there’s a lot going on it’s hard to keep track of what’s coming at you. There’s a lot of split-seconds memorizing to be done or you’re going to get turned into a pin-cushion in shot measure. Lastly, you have spawners. These big ugly bastards float about the place coughing up an endless stream of swarmers. It makes sense to take them out first but getting to them is an entirely different matter. There are other things doing their level-headed best to give you a bad day as well but to be honest they’re just adding to the torture so I’ll let you meet them when you play. 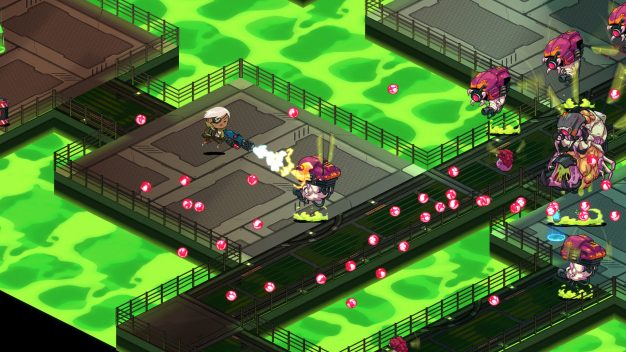 The bosses in Wildcat Gun Machine are absolutely ridiculous. You’ll be wanting to get your pattern recognition head-on quickly or you’ll find it really hard to telegraph their attacks. Sometimes there are so many bullets flying about the screen that all you can do is dodge the hail of death in the air. Bosses are very good at giving you other things to worry about than them so they can use one of their more powerful attacks to swat you when you aren’t paying attention. I love a good boss battle and the difficulty here is just right. You feel like you’re in the fight of your life but these battles never feel insurmountable. There are way too many bosses out there that are difficult for the sake of it. Sometimes you’ll realize that you’ve just brought the wrong weapon to the party and a switch-up will work wonders. You have a sufficiently sized armory so it’s fairly difficult to run out of ideas. If you get the formula right you’ll be fine. Until the next thing comes along and eats you, of course.

Your weapons loadout is great in this title. There are so many action games out there that give you thousands of weapons to play with. This is brilliant in essence, but in too many games you find yourself using about 10% of what’s on offer. All the weapons in Wildcat Gun Machine are useful depending on the task at hand, and your play style. As an example, I know grenade and missile launchers are powerful, but they aren’t usually very fast or accurate so they aren’t my go-to guns. I like machine guns, particle weapons, and for those small rooms that need clearing out quickly flamers. It’s very much a case of the right tool for the job but nothing you’re given feels like it doesn’t belong, it might not just be your bag. Also important to mention is that none of the weapons are carbon copies of each other with just enough difference to give them a new name. All of the gear you get is stand out and this is really good to see. 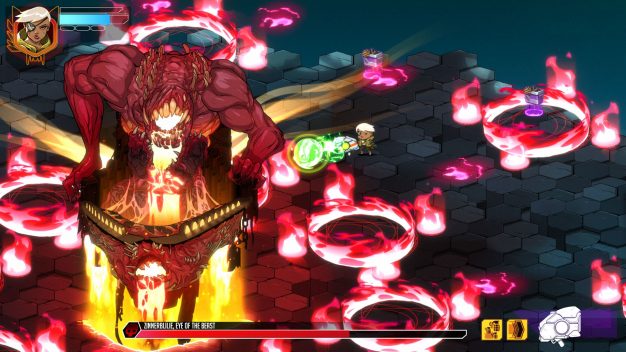 So, what’s a gun machine when it’s at home then? It’s a mech. This big stompy metal thing gets more big and stompy as you kill bosses and adds more weapons to its already slightly ludicrous arsenal as you go. Think of this as you’re ultimate and when you kick it off, everything around you suddenly isn’t having fun anymore. The gun machine also makes you invincible for a small period of time, so you can upset everything else in the vicinity without fear of death. So what’s the kicker? Simply it’s a bloody nightmare to get. You have an ultimate bar that fills as you do well and very importantly don’t die. If the bar hits full you have one ready death machine. This is a rather large if though. Should you drop from the mortal coil this bar resets to zero. Expect to do that a lot so using the gun machine is more of a treat than something you should take for granted; unless you’re really good at the game, in which case all power to you.

So, this all sounds like a giant dose of arcade blasting fun, right? What’s not to like? To be honest not a lot. Wildcat Gun Machine is a love letter to late 90s shooters and the graphics are testament to that. The musical score is energetic and perfectly fitting for the genre and it controls like a dream. That’s all the nuts and bolts boxes ticked then, so what else? Well to be honest the biggest downside to this game is also what makes it so much fun. It’s brutally difficult. This is the sort of game that makes your fingers hurt after a bit from clenching your controller. Literally, anything can, and absolutely will kill you and if you don’t like that immense difficulty curve you’ll struggle here. 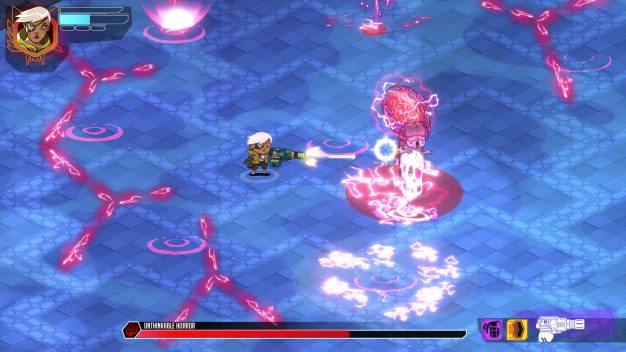 The other thing that I’m not sure about is the backtracking involved when you die. Wildcat Gun Machine has a spawn system that allows you to reappear at the start of the room in which you were killed. This is fine as long as you have respawns. You start with three and then buy more from the shop as part of your upgrades up to a total of nine. As long as you can keep these you’re fine but should you run out you’ll get dumped back at your save point and have to track back through the area you’ve just done. Everything respawns and if you got past a room earlier to the one you lost by the skin of your teeth and then get stuck, tough luck. I found this frustrating as an experienced player, I can imagine a newcomer to this sort of thing getting really annoyed and giving up.

Aside from the hair-pulling difficulty, there’s nothing not to like here. The thing about games like this is you generally get what it says on the tin. You buy these titles because you’ve got a fair idea of what to expect and all expectations are met with this one. As long as it looks and plays great we’re all good. I got to the point a little while ago where I didn’t need to play on for the purposes of this exercise, I knew what was coming. This hasn’t stopped me from continuing to play anyway, purely because I’m having too much fun with it and this in and of itself should speak volumes. All in all, really good stuff!

If you like the Bullet Hell genre and are looking for a new way to bruise your thumbs, look no further. Wildcat Gun Machine does everything it promises and does it well. This is a trip back into your favorite amusement arcade and you’ll have so much fun here. Forgiving this game is not. If you’re looking for an easy ride or something to learn the ropes on I’d probably look elsewhere. Of course, if you’re a huge masochist like me, have at it! You’ll not regret your choices.