I missed out on the Sega line of consoles as a kid, so I don’t really know about the Wonder Boy/Monster World series. I have seen how some titles have been remade in the last few years as well as a newer title released in 2018, and I know the series is known for solid platformers with a good following. I love myself a good platformer, so my interest was piqued with the remake of Wonder Boy: Asha in Monster World that was recently ported out for the Switch. Will this remake provide that solid platformer I am hankering for? 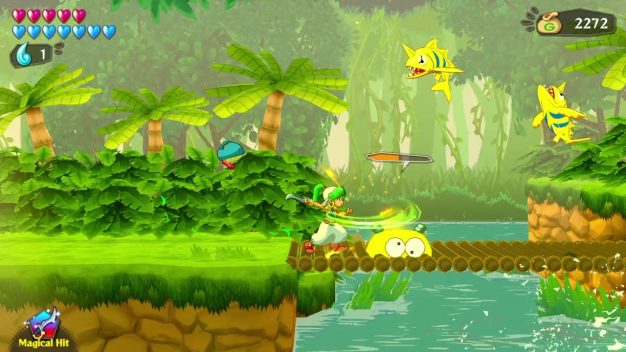 Well, I can say that Wonder Boy: Asha in Monster World is a faithful retro platformer in a modern skin. It has come a long way from its roots back in the Sega days, both visually and gameplay. Let’s talk about the visuals; it’s obvious that it’s been redesigned from 2D to 2.5D-ish from the ground up. While I can’t attest to how it played in its original form, this remake plays exactly how I would imagine a 90s platformer would play. It almost reminded me of how Ducktales Remastered played when it was remade in the last decade: updated modern graphics but still keeps that essential platforming gameplay.

In Wonder Boy: Asha in Monster World you play the titular character, Asha, and you control her by moving forwards, backwards, jumping, swinging her little magical dagger to dispatch enemies. Later on, you get to meet the Pepelogoo, which allows her to do more platforming elements like double-jumping and gliding. Asha will also have to fight some bosses here and there, so you’ll have to upgrade her fighting prowess. Upgrades are pretty much done by purchasing equipment from the gold you earn from going along with the storyline. However, let’s face it—this game is fairly easy. If you’re not a completionist, you’ll be able to beat all bosses (even the final boss) with some minimal upgrades. 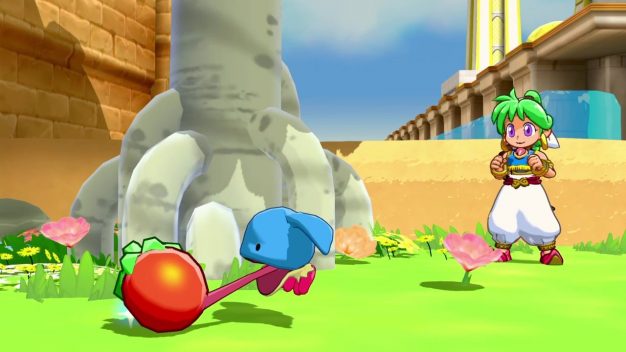 If you ARE a completionist, Wonder Boy: Asha in Monster World can be frustrating. There are many missable items in the game, and you are locked out of some levels after progressing in the story. Fortunately, the game is very short (and again, fairly easy), so if you do mess up and miss an item, you can restart the game all over again. However, that’s such an inconvenience, since all your progress is basically out of the window for such a mistake.

Another negative thing I can say about Wonder Boy: Asha in Monster World is that, coming from the eyes of a younger player who grew up after the 90s platformers, is that the gameplay can be boring. Most levels are almost the same song and dance, and I’m afraid most modern players won’t be stimulated after a couple of levels. However, is it really the developer’s fault for keeping the remake so true to the original? I can see them trying to appease the older gamers by doing so, but also alienating the newer ones. 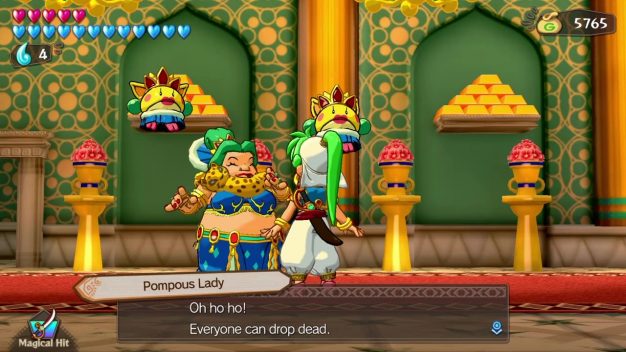 Wherever you fall in the spectrum, I believe that Wonder Boy: Asha in Monster World is a solid platformer that deserves to be with its brethren of the other remakes in the series. Fans of the series will absolutely love going through the game reliving their childhood. Newer players, like me, that appreciate retro games will find this a gem. Speaking of retro games, if you input a special code in the title screen (Up, Down, Up, Down, Left, Left, Right, Right), you’ll unlock the soundtrack from the original game that you can change in the system settings. Rad!

Follow the Journey of Asha and Pepelogoo to Save Her Land