World End Syndrome is a romantic visual novel game developed by TOYBOX and published by Arc System Works that was released on the Switch and PS4 this month. The story follows a 17 year old high school junior trying to escape his troubled past. He is invited to transfer to Mihate High School after accidentally causing the death of his older sister. He moves to coastal Mihate Town hoping to start a new life and forget his past while working through the depression, guilt and grief surrounding his sister’s death. 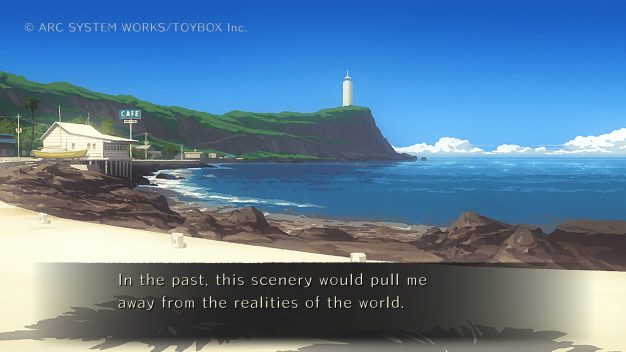 Mihate Town appears to be a quiet seaside paradise, but all is not as it seems. The legend of the Yomibito is well known; the dead are said to come back to life every 100 years. Once resurrected, the Yomibito attack the living to regain their sanity, but their thirst can never be quenched.

Of course, as you would expect,  our sad protagonist just happens to move to Mihate on the 100 year anniversary of the last known incident. Sure enough, strange and horrifying things start to happen in the town not long after the protagonist arrives; this starts with a student at the high school suddenly dying. 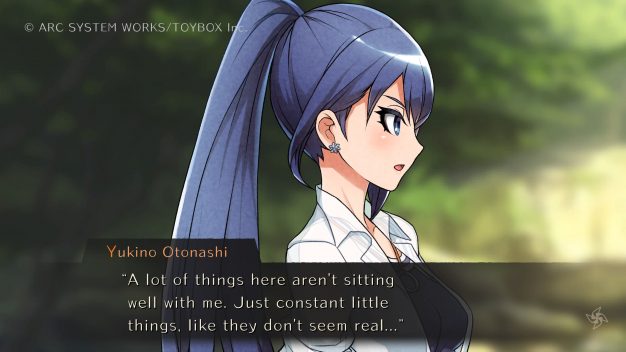 After a lengthy prologue, World End Syndrome gives you essentially a month (your summer school holiday) to run around the town as you please in morning, afternoon and evening chunks. While wandering around, you can encounter events with other characters, some of which will help you in boosting your “aura” with other characters (typically the girls you can romance). Each girl is represented by a different color of aura, for which you can check the status in your handbook.

The game doesn’t actually explain this to you, however. On top of that, it’s almost impossible to determine where certain characters are going to be unless you happen to encounter them a day or day segment beforehand saying where they’re going next. Further, you can reliably show up somewhere you know someone will be (e.g. at their job) over and over and over again, encountering them many times, and never receive special events or aura. 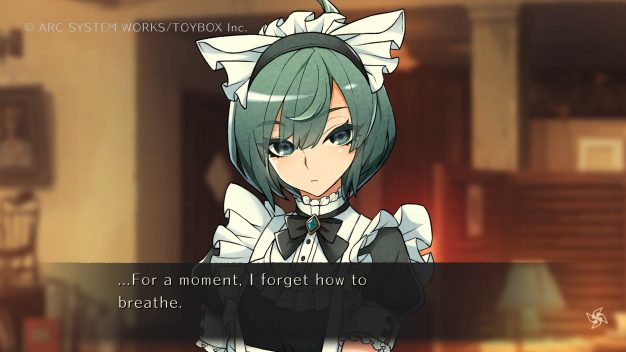 When you first play World End Syndrome, the game railroads you onto a particular path with next to no choices. When you get to the end of the first run, you have a choice, but there’s only one option you can choose. After that, you get the worst ending. Following that initial run though, text you’ve seen before on certain days and times will show up as yellow and you can also see places on your map where you’ve encountered people before, thus aiding you in making different choices and pursuing different relationships with subsequent playthroughs.

On my second run, I romanced Saya. This was completely by accident – I just happened to keep running into her. The third time I aggressively went to the same place over and over where I knew another girl would be and encountered her constantly. However, that didn’t build up enough aura to trigger any special events for her romance line and I received the worst ending again. 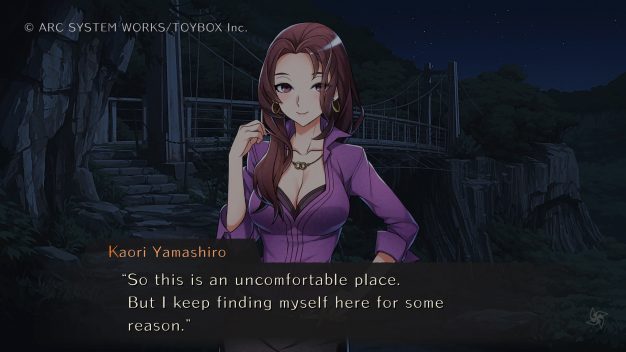 After meeting all of the main cast members, particularly all of your romance options, I chuckled at the trope-iness of it all. Maimi is your cousin of some distant persuasion. She’s tomboyish and rough around the edges while still wanting the typical high school girl experience. Saya is the haughty rich girl. Yukino is the slightly older, carefree one who knows a bit more than she’s letting on at first. Miu is the quiet, cold one who just happens to wear a frilly maid outfit when she’s working at her brother’s cafe. Hanako is – no spoiler warning here because it’s that obvious – the huge celebrity idol that everyone is going mad for that’s trying to disguise herself as a regular girl to get a taste of the high school experience.

Oh, and of course there’s your sexy and mysterious teacher, your class clown friend who’s a massive, intolerable pervert, and small collection of other characters you may bump into along the way. I was decidedly pleased to discover that the further you dig into your relationships with the girls individually as you progress their romance routes, they develop into much more complex and interesting characters. 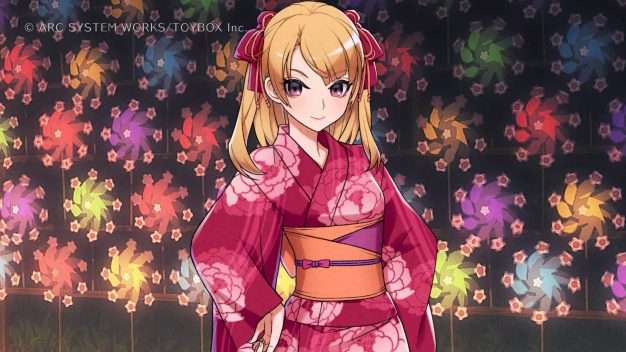 While there’s some obvious fanservice thrown in for good measure in both the dialogue and the still images, the romance events are usually pretty mature and handled well. However, having looked at the aura guide sent by the developer, so much effort has to go into building up enough aura to trigger events and get on various romance routes. I’ve subsequently learned that you need to complete all of the available romances in order to find out the truth behind the mystery in the main storyline. I would be fine with that if it was at all clear how you were supposed to track these girls down at the right time to build up the required aura to actually romance them.

The main plot is actually quite interesting, once you’ve put aside the initially tropey, sometimes unbelievable setting (e.g. sure, parents and the school administration would be perfectly comfortable with a teacher making a special club that only specially-invited members get to attend but it’s also not officially registered and they go on special trips together?). But because the slice of life and romance aspect completely dominates the plot, you only get tiny slivers of the actual mystery as you go through each route. The developers dangle an intensely frustrating carrot by only allowing you to eke out little pieces of the plot as you form relationships with others. 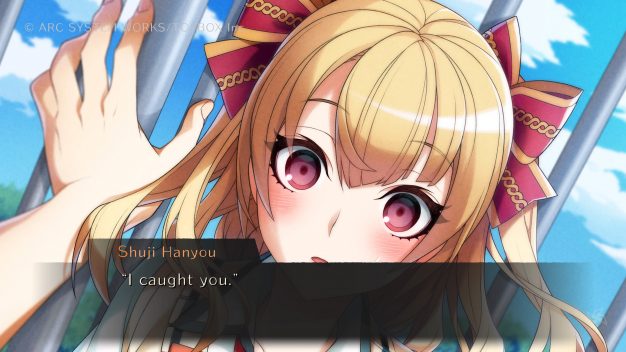 I’ve read ahead a little and found out that pretty much all of the plot climax and conclusion happens right at the end after you’ve strolled through all of the romance routes. I really wanted to find out the truth behind the Yomibito legend, but the game really asks too much. I’m not saying they should make it easy, but there’s so much trial and error involved that it seems like some times you would be doomed to fail or would have to sit there, saving and reloading every time you didn’t locate the girl or other person you wanted to see. Exhausting is what I would call that.

I only have nice but not overwhelming praise for the audiovisual side of things. The voice acting is really good, no question. The character voices are distinct, clear, crisp, and the production value was clearly very good. The subtitling is pretty spot on, with only a few grammatical and typographical errors to speak of. The backgrounds are very pretty and the characters have very unique, different designs from one another, as well as very distinct personalities. 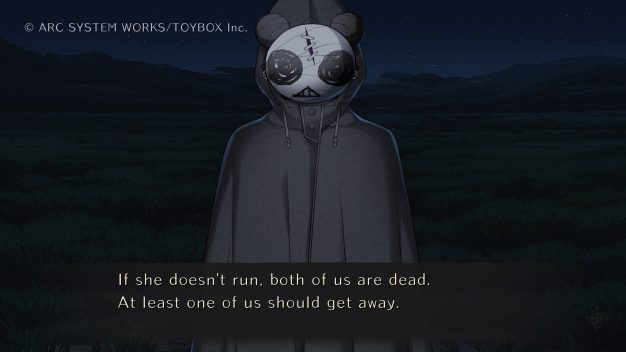 That said, while the protagonist in a visual novel is usually a blank slate, I was mildly pleased to see that the protagonist has a bit of sass to him…but only a bit. Most of his dialogue is “Look at how brooding and poetic I am” monologuing when he’s alone and it honestly makes him once of the most teeth-gratingly unlikable protagonists I’ve ever encountered. I may have actually preferred the blank slate. Granted, he’s depressed and grieving, but that doesn’t make having to sit through his moaning any less painful.

I really wish that World End Syndrome didn’t hide so much of its actual plot behind the slice of life and romance portions of the game, as even your choices in these sections don’t seem to actually lend themselves to letting you explore the actual mystery you’re supposed to be trying to solve. There are many good features such as the yellow text for previously-seen scenes, the fast forward option which is deactivated when it’s something you haven’t seen before but stops if you’re fast-forwarding something old and something new or a choice comes up, and the map markers for things you’ve seen before. It certainly makes replays easier, but it doesn’t actually help you do anything more than avoid romances you’ve successfully completed on previous runs. 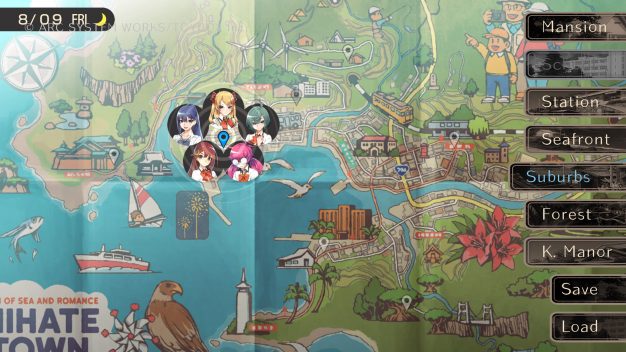 I may return to World End Syndrome in future when I have time to spare and a guide open to assist, because I’d love to see the actual ending and also a few more of the girls actually have their full character development. Regrettably, at this stage, there’s too little plot and too much trial and error for World End Syndrome to get my recommendation.