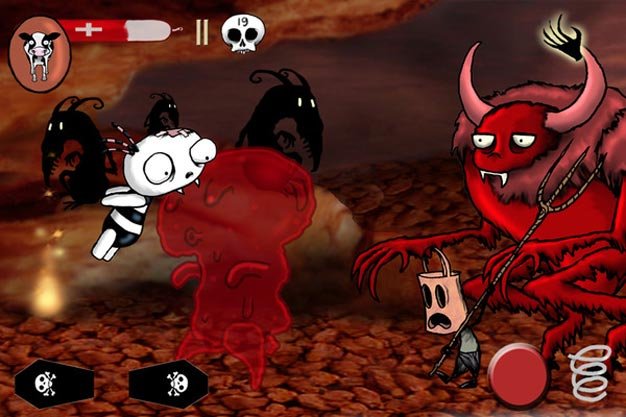 His first foray into videogames, Vampire Puff Puff will take place in the same universe as the Lenore comic books, with the eponymous star kidnapped by Pooty Applewater. It’s up to her loyal blood-sucking sidekick to brave 23 different baddies and 15 unique zombies through five different levels to rescue her, armed with such weapons as the Bragun, which turns cows into a shotgun blast of sausage, and the Poe Poe Gun, which shoots ravens and weeps when out of ammo. Basically, it sounds like Dirge has a chance of realizing his dream to make “the most unique and entertaining side scroller shooter ever.”

“It’s been my dream for a long time to see what I could create videogame wise, and I’m pretty proud of what I’ve come up with,” he shared on his blog, adding that though the game is currently only iPhone-bound, releasing it on other platforms like Xbox Live is possible if it proves popular enough. If nothing else, Dirge hopes enough fans will rally around the iPhone release to warrant all the new additions he’s already got planned. “I have TONS of updates planned for it if it makes the investor’s investment money back, like achievements, new weapons, an outfit store, multiplayer, rideable characters, going on rides in Spookyland, etc…For the first time ever, I’m asking for help and support in this endeavor just so I can add the updates to make this the full game I envision.”