On September 14th, I had the opportunity to attend one of Egypt’s very few video game industry events. Run Double Jump is an event that encourages indie developers in Egypt to discuss their work and showcase their games. Its mission is to energize investors and professionals towards supporting the video game industry in Egypt. Furthermore, RDJ aims to raise awareness about the presence and struggles of video game development in Egypt. The Egyptian Information Technology Institute (ITI), IGDA Egypt Chapter and Egyptian indie game studio, 2024 Studios were the event organizers.

Each year, attendees test the showcased games and provide feedback to the developers. As a result, aspiring developers in the region gradually become open to the idea of sharing their work. This should help developers perpetually fine-tune their project until it’s ready for release. In turn, these indie developers and volunteer testers assist with shaping the Middle Eastern video game industry into a more solid form. The featured games this year were playable across multiple platforms such as mobile, PC, and VR. 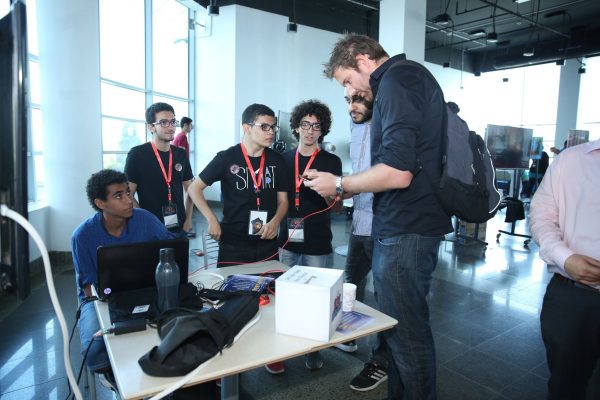 Run Double Jump 2017 also featured multiple talks and workshops by industry professionals. Here are some that highlighted different aspects of the industry… 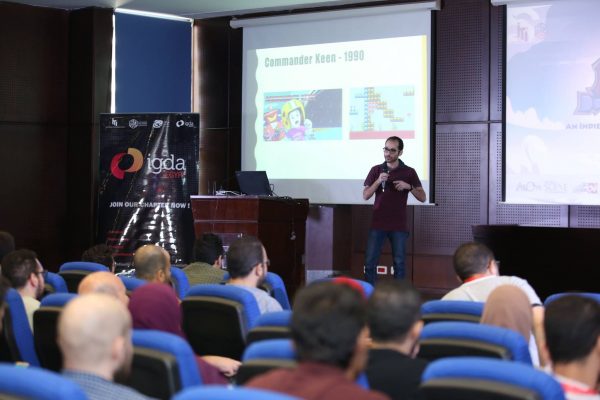 Instinct Games, one of the four development teams behind ARK: Survival Evolved, was represented by game developer Ahmed Naguib. In his talk, he discussed the history of the iconic id Software and its founder, John Carmack. That included the 1991 title Catacomb 3-D, the first video game to introduce 3D graphics into the Catacomb series. In addition, the talk featured 1993’s DOOM, how it was more of a service rather than a product. That is all thanks to DOOM being one of the first ever modder-friendly games.

Nowadays, id Software is a subsidiary of ZeniMax Media, mother company of Fallout developer Bethesda Softworks. Naguib closed his talk with the four pillars of the video game industry ecosystem. That included Innovation and Development, Publishing and Advertising, the Consumers (a.k.a. players) and Events/Conferences. In conclusion, he pressed on the fact that the proper handling of these four pillars is key for Egypt’s ability to compete and penetrate the worldwide video game market. 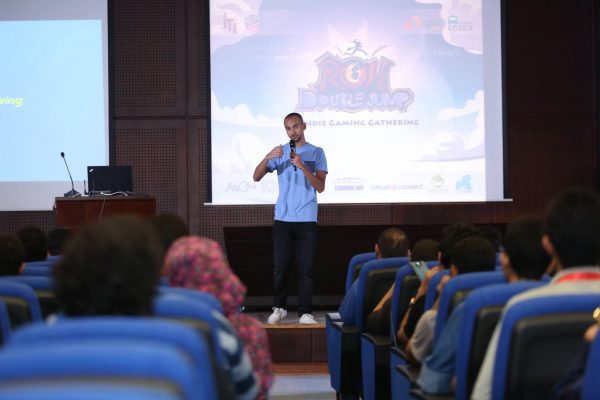 MO4 Network‘s Momen Al-Adl gave us an insightful talk about the current fast-growing tech: AR and VR. Momen highlighted how AR and VR present an opportunity rather than simply impose a challenge for Egyptian developers. “You can be the first. There are many firsts left,” he said, emphasizing on the full half of the glass. Momen presented MO4 Network to have the first VR studio that offers a VR incubation program in Egypt. The program kicked off back in July. MO4 Network are also the first ever recipients of Facebook’s Virtual Reality Grant in the Middle East.

With that being said, MO4 Network aim to motivate potential applicants to create VR experiences that could be marketable and playable by many. The agency’s affiliation with local online hub CairoScene could even grant the involved or winning developers online exposure. Al-Adl then spoke about how AR and VR shouldn’t be used only for game development, but for gamifying anything that isn’t a game. That includes news, advertisements, and brand experiences. Developers can help broaden the horizon of interactive entertainment by focusing on creating VR experiences as much as VR games. 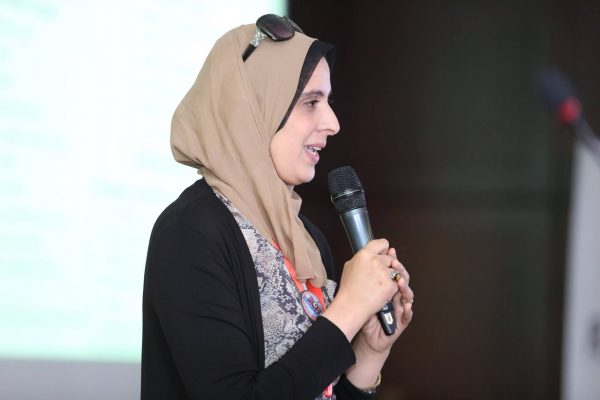 Ms Shoukry’s passion was all about using gamification for the purpose of nurturing the community around us. Her focus during her studies was on gamified education. She believed in the life-changing impact that gamification can have on society. Despite most games being merely and naturally entertaining, she believed that games can be created for a greater cause. Laila revealed to the audience how committed the Middle East is to the educational branch of gamification. According to statistical data from her studies, the Middle East currently has the highest level of growth in gamified education. Yet, the region still has the lowest worldwide income. Currently, it is estimated to be worth a total of 81 billion dollars…and counting.

Shoukry mentioned that in 2022, the Middle Easterners’ presence is expected to grow by 30%. The leading nations in gamified education in the Middle East include Egypt, Turkey, Kuwait, Jordan, Lebanon and the United Arab Emirates. The top educational apps include English language learning apps and early childhood education apps. Laila also confirmed that serious games on mobile are easier to maintain and provide the highest possible revenues. The speaker closed her session by highlighting the importance for developers to ensure added value to the user’s knowledge, while maintaining a fun and enjoyable gamified experience.

After walking you through some of the sessions’ highlights, and after personally attending almost all 12 sessions of the day, the time came to announce the glorious winning team.

AND THE WINNER IS… 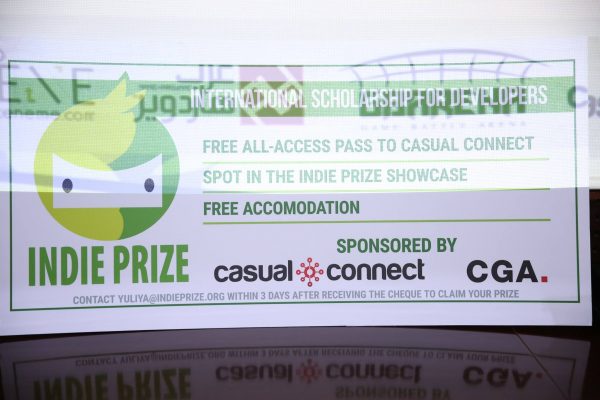 What winning team, you say? Well, RDJ 2017 does not just serve as a platform for raising awareness and motivating Egyptian gamedevs. The event organizers believed that embedding some competition and rewards could serve the event’s purpose well. The highest prize rewarded was an Indie Prize scholarship, sponsored by Casual Connect and the Computer Games Association (CGA). 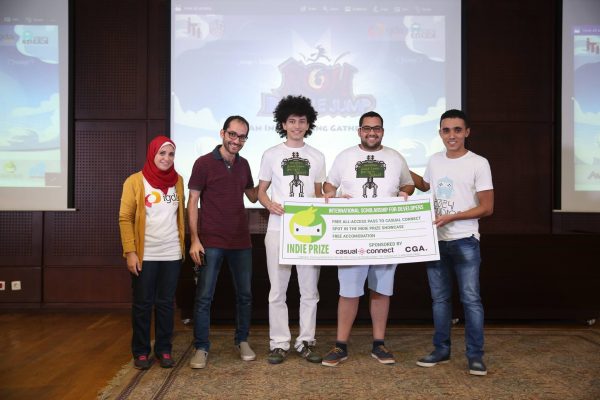 The winning team, Youmaku Games, comprising of graphic designer/concept artist Ashraf Abou Heikal and developer Youssef Aly, will get the opportunity to attend Casual Connect USA next January. The event is set to take place in Anaheim, California. At Casual Connect, not only will Youmaku Games get to attend lectures given by industry professionals, but they will also get a spot in the Indie Prize showcase.

As part of the Indie Prize scholarship, the duo are set to compete with other developers. This way, they’ll get a shot at winning the highly-desired Indie Prize awards while getting their game out there for everyone to see and enjoy. I’ve personally had the utmost pleasure trying out their flamboyant 2D platformer game, Skelewton’s First Law. All I can vouch for is this: it is the kind of game I want to see released on Steam – so I can buy it and earn it with a sense of patriotic pride.


So to those of you who believe that video game development is dead in the Middle East, I bestow this article into your hands as microscopic proof of its quietly beating heart. For the Egyptian gamedev industry to get a boost, we will need more support from our government and from potential investors. And I can only imagine how fruitful it would be if global cross-studio partnerships are ever formed.
Related Posts:
YOU MIGHT ALSO LIKE: