When aliens invade the planet and build an unstoppable army of robots, the only logical way to fight back is with an even better robot; preferably with a disco ball head and a bat with a nail in it. This is the route humanity takes in Rikodu’s Second Hand: Frankie’s Revenge; an early access title that just released on Steam. A cartoonish 4 player co-op action battler that lets each player piece together their perfect fighting machine to take back the planet from the alien robot menace. 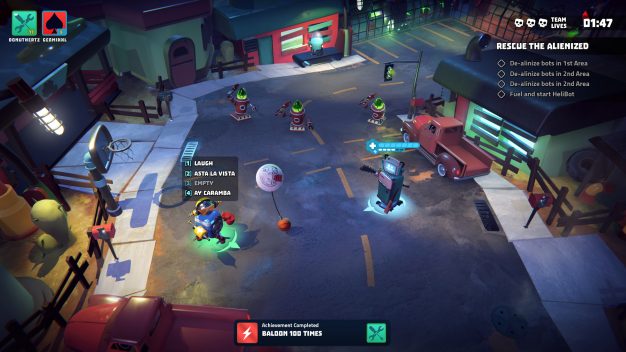 The biggest point that must be addressed, first and foremost, is the customization options which are broken down into 5 major areas: head, main weapon, off hand weapon, body, and wheels. Each piece of equipment also comes with several unlockable skins to finely tune the look of Frankie. Instead of a disco ball head, he can have a disco ball with an afro or a head. You can also use different skins to customize items in your base, which acts as a hub area to choose levels and loadouts. As far as I know the only purpose these base customization’s have right now is to flex on your friends in the local and online co-op.

These skins can be unlocked by buying them with in-game currency, which are bolts that enemies drop pretty frequently, or by opening toolboxes that are awarded upon leveling up Frankie. The toolbox is functionally a loot box that will award 1 skin for either the base customization or for a random part Frankie has in his arsenal. As far as I know, there are no ways to use real life money to unlock skins or loot boxes, so there’s no malicious gambling going on in Second Hand. 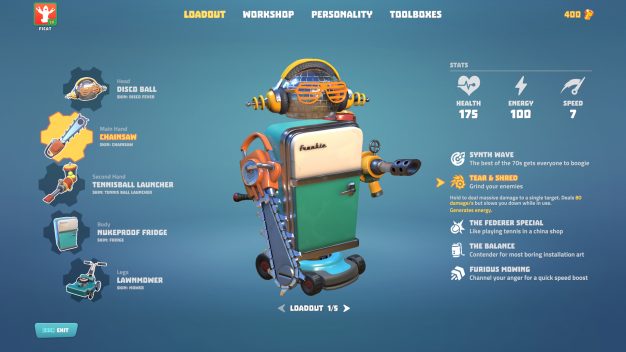 Despite customization being a major selling point of the game, I still felt a bit underwhelmed by the options offered. As of this look at the game, there are 4 different heads, 5 main weapons, 5 off hand weapons, 3 Body types, and 3 types of legs to be used by Frankie. The legs vary up Frankie’s walk speed, the body adjusts the balance of HP and energy reserves for special attacks. The main weapons range from a sword to a chainsaw for melee, and glue gun for slowing enemies and healing allies. Off hand weapons have more ranged ability or can stun enemies. Special attacks change with the headpiece Frankie wears, with the starting head being a disco ball that dazes enemies in range.

While on paper it may seem like a lot of options, there were several pieces that functioned very similarly. I was able to get a taste of each piece of equipment fairly quickly, as the gear unlocks at a steady pace. It’s worth noting that I was able to get a new piece of gear after each level completed and the game still has several blanked out sections. Meaning this is likely just a slice of content for the preview build, so I can’t knock it too hard for what it’s offering at the moment. Hopefully there are more options added, as of right now there are just enough pieces to make a rounded team with melee users, a ranged fighters, and healing specialists. 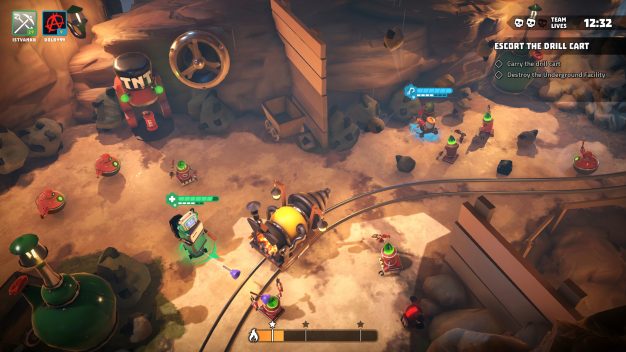 In this preview build I was given a look at 12 levels across 2 different campaigns as well as the boss fight for the first campaign.These levels often followed a similar pattern; go through a mostly linear path while fighting off randomly spawning enemy robots. Some levels would have Frankie escorting a payload that the player has to fuel up intermittently, some required Frankie to sabotage the enemy robot’s production machinery. Despite the overarching goal of the level, the majority of your time in Second Hand will be spent blasting robots with your preferred loadout.

The robot blasting is fun! Doubly so with friends by your side for support. Frankie moves very fluidly in a twin stick shooter style with a useful dash feature, making it easy to kite hordes of robots or to close the gap on an enemy showing an opening and then get out before they can retaliate. The enemy types are varied and keeps each engagement interesting. They’re also wonderfully designed in the same cartoony style as Frankie, making these fights visually appealing as well. One of the most interesting parts of the game was that at the end of each level you have to call in an evac and then get your jetpack to boost you out of the map while hordes of enemies chase you around. It’s hectic fun and makes every level a challenge from start to finish. 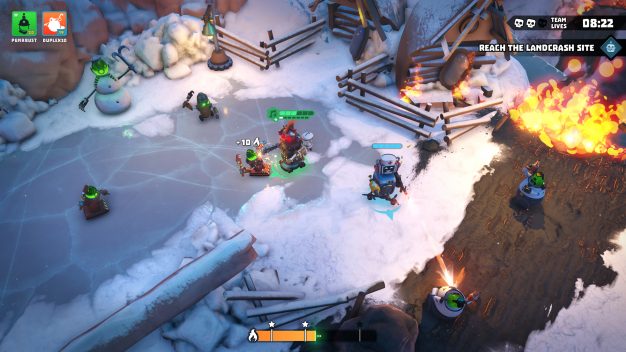 Having a partner or team really sets Second Hand apart from the crowd. By yourself Second Hand can get a touch monotonous by running through objectives, killing robots; rinse and repeat. However once you get a team you have more freedom to try different things. You can have your teammate heal, while another pushes the payload and you keep the enemy robots off their tail. The options of gameplay really open up a lot more once the team gets involved and this is something I’d like to see developed more in time. Maybe introduce more Frankie parts that work as a support tool and make strategizing more in depth.

Second Hand: Frankie’s Revenge is a hectic fun battler that is still in its infancy, but there are a lot of exciting places for the game to go as it traverses early access. The content available was a little on the shallow end for its first release, but the times I had while working through this portion of the game were filled with more good than bad. There were definitely moments I was left wanting more. Luckily Rikodu has dedicated to adding more parts and modes in the coming weeks as Second Hand goes through it’s first steps of early access. As it is now, the game is a stylishly cartoony way for you and some buddies to kill some hours and even more robots.

This preview is based on an early release copy of the game provided by the publisher.