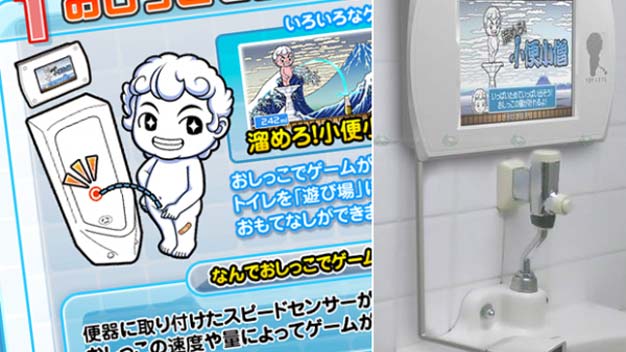 My personal psycho-analytical tastes have always run toward the Jungian, but now that I’ve seen Sega’s new “Toylet,”  I’m thinking there might just be something to this whole Freudian theory of penis envy.

Through the end of January, Sega is testing a new piss-powered game console on location in four major metro areas, including Tokyo’s geek mecca Akihabara.  The “Toylet” consists of a small wall-mounted LCD screen linked to a pressure sensor-equipped urinal, which allows users to play a series of mini games, like The Northern Wind And Her where the strength of your urine stream effects how successful a naughty gust of wind is at blowing a girl’s skirt over her head. Basically, all the games boil down to how hard you can pee. That and shilling you products that may or may not be turned into pee, as the Toylet plays ads while you’re waiting for that shy bladder to relax.

This is by far not the weirdest or craziest thing to come out of Japan, not by a long shot, so I didn’t bat an eye when I first read about the “Toylet,” not until I got to the part about the multiplayer. Yes, multiplayer.  Milk From Nose compares the strength of your urine stream to that of the urinal’s previous player, as represented by a Sumo-style showdown where the winner blasts the loser out of the ring with a stream of milk spraying from their nose. What worries me is how Sega’s going top this if the “Toylet” really takes off. We all know how touchy gamers get when game makers neglect to include local multiplayer.