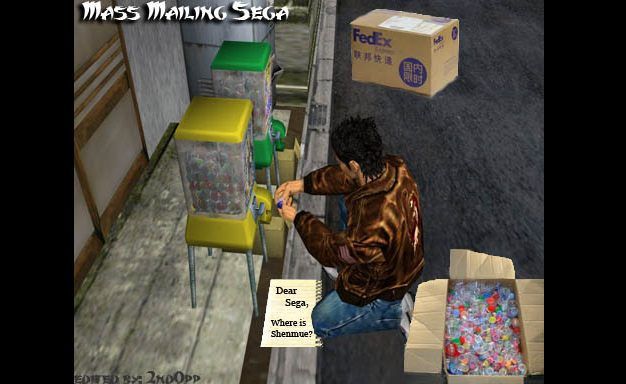 If you’re a gamer and you never played SEGA’s ambitious Shenmue on the Dreamcast then we’ll have to take that gamer badge you’re wearing so proudly and throw it on the ground. Sure the game had its flaws, but it still stands as one of the most ambitious and strangely beloved games of all time. As most of us already know the game is a trilogy, but only two of the three games have been released. This has left many a dire Shenmue fan very upset, especially since the game would be even more impressive on this generation’s consoles. Even a Wii version would be better than nothing, especially since No More Heroes proved that motion controls and mundane chores are a match made in heaven.

But what are we supposed to do about it? How about joining the mass mailing of SEGA by MySpace Shenmue fans. Ryo Hazuki has outlined the group’s plan to mail SEGA of Japan as many plastic toy capsules as possible in hopes of actually getting a reaction out of the game publisher. All fans of Shenmue are encouraged to mail SOJ a toy capsule and a letter between Nov. 27 (the launch date of the Dreamcast) and Dec. 29 (Shenume‘s release date). The hope is that the outpouring of supporters will convince SEGA that completing the trilogy is worthwhile. Prices can get high when shipping overseas so the option to send a letter without a toy or just donate to the cause is also available. We here at TVGB desperately hope this works.