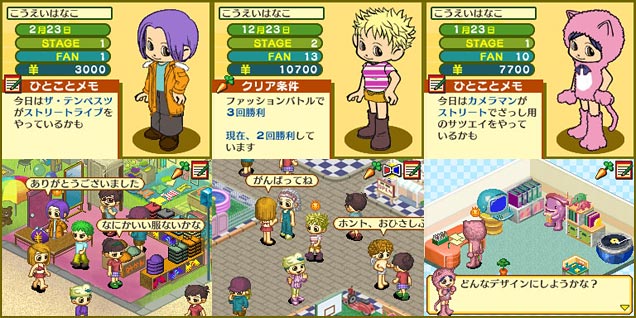 POP CUTIE!, stemming from Koei’s extensive line of well-respected tactical action games and simulators, follows very much in the same vein as its predecessors, with a few fashionable twists. Rather than taking the role of majestic Chinese warlords, players control up-and-coming fashion designers, rising from the doldrums of flea market sales to the illustrious backdrop of their very own fashion boutique.

The journey won’t be easy, however, and players will be charged with the task of outwitting – and, indeed, outdesigning – their rivals as they make their way to the top. Engaging in ‘Fashion Battles,’ players are judged on their designs’ ability to attract and hold the fashion-conscious populous.

Getting a bit deeper, POP CUTIE! engages players in a bit of retail management, allowing them to take the reins of their shops as they put out magazine advertisements, hire models, and work cash registers.

Overall, POP CUTIE! looks like an interesting, unique take on a genre populated by more male-oriented offerings. That is not to say, of course, that male gamers should sidestep the title – fashion is, after all, entirely unisex.