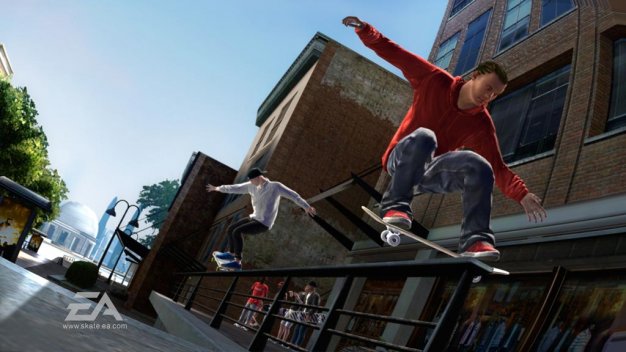 They didn’t really want to reveal anything, but TVGB’s tenacious reporter Kristen Spencer got it out of them in the end: Downloadable content is coming to Skate 3, in the form of new environments.

In a recent interview with That VideoGame Blog, Producer Chris Parry was initially reluctant to reveal DLC plans for Black Box’s latest Tony Hawk-killer, saying, “I know I won’t be able to talk about it. But yeah, for sure. We are, umm…yes. I can’t go into any detail, but we had meetings about it just the other day, so I know for sure…”

Not to be put off the scent, Kristen mumbled something about snipers in Parry’s ear, then went in for the kill. He immediately crumbled, “In the first game we didn’t have the infrastructure, but in the second game we had DLC it was considered a success. One of our DLC packs was the most popular at EA. You might as well put the hooks in!”

“Without giving anything away, of course people want new spots to skate. We can only build so much during the course of the development cycle. So when we ask what else do people want, people definitely want new places to skate. That’s a no-brainer that that will happen.”