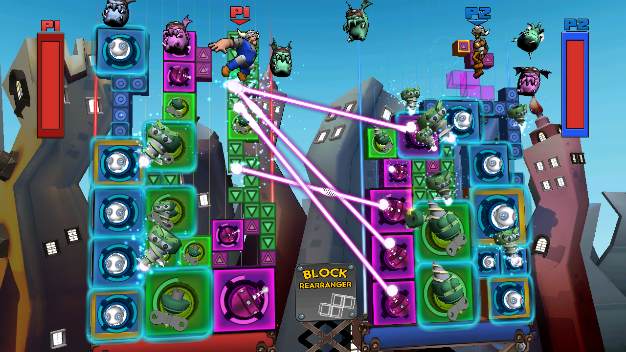 Eitan Glinert, founder of Fire Hose Games, explains Slam Bolt Scrappers as revisiting our childhood instincts of  “going over and kicking over the other person’s blocks – except this time you do it with high powered weaponry.” Looking at the game, I would call that description very fitting, especially after seeing the mischievous smiles on the faces of those currently playing. You had me at high powered weaponry.

The frantic battle mode features up to four players – split into two teams – battling it out to build the biggest, baddest tower which will then destroy the other team’s tower. Everyone can fly in Slam Bolt Scrappers, which is good since the Tetris-esque building materials come from the different colored Creeps that, if left alone too long, will start wreaking havoc on my tower. Each color plays a different role in the building process, with the goal being to build huge squares of the same color. The larger the square, the more powerful the attack. It took me a bit to get that thought into my head at the start because I did make a mistake and subconsciously started playing the game as if it were Tetris, a problem that Glinert says will “hurt you.”

“The Tetris thing is very appealing to a lot of people that it looks like that,” says Glinert, “it’s actually a big problem in some ways though because in Tetris you’re trying to make these lines, and get rid of them. If you think that when you play our game, it actually hurts you, because trying to make a line is really bad.

“You never want to get rid of blocks, you want to build up stuff. So you’re trying to build really big squares and it takes people a little while to understand ‘Oh, okay. I want to build big squares of the same color. Got it.’ Color doesn’t matter in Tetris, it does here. So if you just build anything next to each other, it doesn’t really help you much.”

Once I understood that blocks are good, I was building missiles, lasers, and shields like there was no tomorrow. Until I died. I had neglected the fact that while all this building was going on, there were people playing against me and those people could come over to my side of the screen and beat up my character. Thankfully, even in death the game has a bit of strategy, as I could choose to automatically respawn at a set time or I could match the buttons showing on the screen in quicktime fashion to speed up my vengeance. I began pressing buttons like crazy.

After the match, Glinert showed me the the game’s co-op mode which pits 1 – 4 players against all sorts of different enemies. The stage I was shown was a boss battle between four players and a giant robot who, as Glinert says, is trying to “ruin your shit.” There is also the prerequisite lava level, but with a twist. This level in Slam Bolt Scrappers has the tower being built on an area over lava pits, supported by a flimsy chain. That chain, however flimsy it may be, is attached to a set of scales which rise and fall based on the building success of each team. Lots more levels and surprises are teased, but that is all they are prepared to show right now. All of which should be shown before the game’s PlayStation Network debut in early 2011.

In the end, this is one of those pick up and play games that I can definitely get behind.