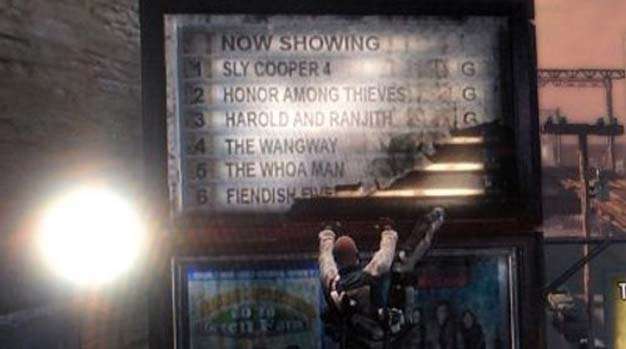 An eagle-eyed gamer who deserves an award of some sort which I’ll invent a name for later discovered a little glimmer of excellence while climbing around the demo for inFamous. Focus those peepers on the top listing of that cinema marquee and you’ll notice “Sly Cooper 4” which is the rumored-to-exist next chapter in the absolutely amazing Sly Cooper series from inFamous developer Sucker Punch Productions. I dare say it’s the best platformer series of the past decade and I will defend that statement with your life.

I’m not able to piece together words that can convey the extreme amount of happy pouring out of my soul right now. If I could kiss whomever discovered this little easter egg on the mouth I would and it doesn’t matter what gender or life form they may be. Before this image came across the internet machine, there was a glimmer of want for Sly Cooper 4 info to leak out at E3, but now it’s a full-blown obsession.