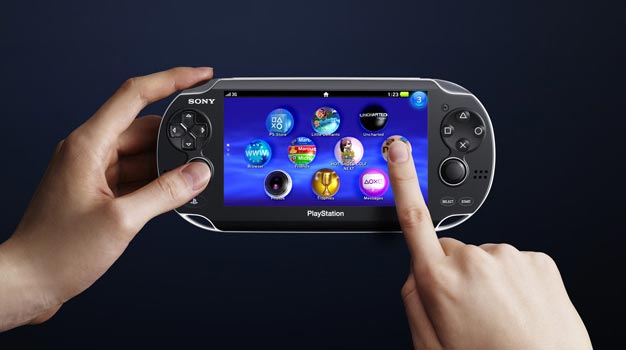 Months of speculation and rumors end here; Sony have announced the successor to the PSP. No, not the PSP2; the device is currently codenamed Next Generation Portable.

The company used its PlayStation Meeting in Japan today to introduce us to the new, oval shaped system, bringing along some impressive specs with it. A 5 inch OLED screen with 960 x 544 resolution sits at the centre of the system, with traditional d-pad and face buttons sitting either side along with – finally- dual analog sticks.

There are both front and rear touch pads, with the company using a game named Little Deviants to show off the accurate controls of the pad. Even our old friend the Sixaxis is making it in to allow for a variety of control schemes. It also boats WiFi, GPOS and 3G, as well as cameras on both the front and back and a microphone. The result is something that looks like the first generation PSP, only more rounded.

But who cares about the tech if there aren’t any games to play? Sony’s got you covered; a sizzle trailer revealed a whole host of new and returning franchises for the system. Among these were LittleBigPlanet, Resistance, Killzone and – of course – Uncharted. Nathan Drake even took to the stage, serving as a tech demo for the open-mouthed press. With graphics that reportedly rivaled the PS3, Sony showed off the variety of control schemes being used in the game, with aiming done through touch controls and camera angles controlled by the Sixaxis.

Later demos of Hot Shots Golf showed them using the camera on the system to move the device, giving you full control of the in-game camera. There’s a range of augmented reality games lined up too. These games won’t be run on UMD like last time, instead memory-style flash cards will be used.

The user interface is named LiveArea, it lets you look at your friend’s activities, choose games to play, and check trophies… guess that means trophies are in! You can also access new apps like Near, a feature that lets you look at what other systems near you are playing.

Sony then invited a range of publishers on stage to demo the device. Capcom, SEGA, and Epic used the space to debut impressive tech demos while Tecmo Koei revealed a new Dynasty Warriors, surprising no one.

Hideo Kojima was next up, bearing a tech demo of Metal Gear Solid 4 that he claimed used tech exported directly from the PS3. He also stated that he’s working on a game that you could play on PS3, then take off and continue on the new device, and there’ll be more to see at E3. Epic followed with the announcement of Dungeon Defenders, a game that was coming to PS3 but has been ported to the handheld in less than a week. Then Activision popped in with an announcement for a Call of Duty game, but not giving any further details.

As for a release date, Holiday 2011 was given, although no word on if that’s worldwide or not. No price just yet either, but look to E3 for these sort of announcements. Time for the guessing game to ramp up again; what titles do you want to see reach Sony’s new handheld?