Its been a long time since a game so simplistic on the surface could make me feel so damn hollow, but Speed Dating for Ghosts accomplishes that feat in record time. This quirky indie sim is, as the title suggests, all about speed dating ghosts. Developed and produced by Ben Gelinas and Mikey Hamm of Copychaser Games, it is available on Steam for under ten bucks, and is both compelling and deeply upsetting, all wrapped up in a quaint little bundle of pretty pastels and unobtrusive text. 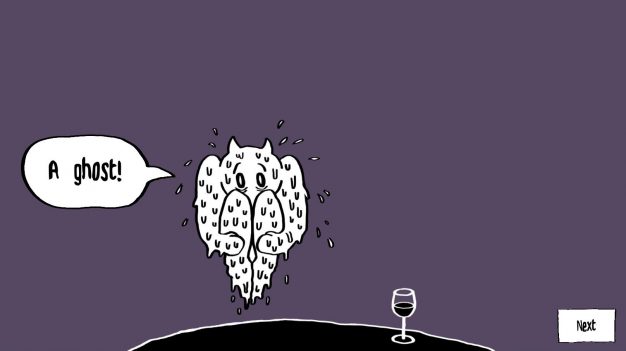 As far as mechanics go, Speed Dating couldn’t be simpler: You click your mouse. That’s it. Click the “next” box in the bottom right-hand corner of the screen to advance the dialogue (or if you really want to mix it up, hit that enter key, you rebel), which will eventually lead you to select from pre-generated responses to answer the ghost’s questions. The only real gameplay mechanics are the choices that you make. Different dialogue options will either make or break you with certain ghosts.

For instance, on my first playthrough I was introduced to a ghost who immediately asked if I wanted to rob a bank. Being the law-abiding spectre that I am, I obviously told him no…and so he left. The possibility of messing up your chance with a ghost, especially if you’re invested in their story (or if you’re a rabid completionist, like yours truly), raises the stakes and forces you to think and chose wisely. However, in my experience I found that even when I thought I royally messed up my chances, I was still able to salvage my relationship with specific spooks in the second round. 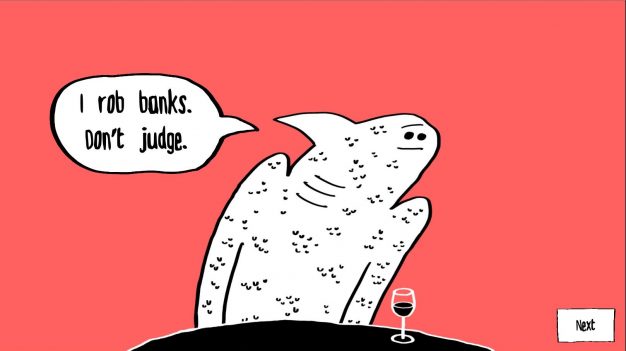 At the game’s opening, you’re asked to choose a room wherein you’ll sit and meet with three potential admirers. When the bell rings, the ghosts move to the next table, and you get to meet your next potential paramour. Once you have spoken to each of them twice, you get to choose who to go on a date with. The dates revolve around what you talked about, and more often than not, they pertain to a certain facet of that apparition’s death. There are nine ghosts in total, plus a bonus ghost (again, for us completionists). Each ghost has their own unique motives, personalities and story-lines, teased about at the speed dating event and then fleshed out as a text-adventure during their date.

With an accompanying musical score by Mikey Maybe, the “alter ego of game artist Mikey Hamm,” a soothing, Wes Anderson-esque color palette, and adorable/terrifying character art, Speed Dating for Ghosts is an enjoyable game to play, if a short one. I managed to get through all nine plus dates in a single sitting, and went back and dated a few of the same ghosts again, just to see how different dialogue choices changed the progress of the game. 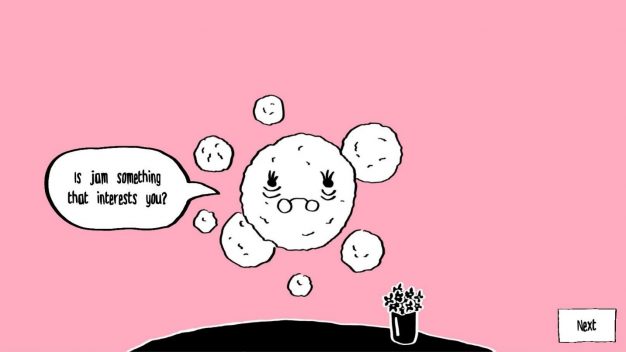 It’s not particularly taxing, and in no way is it traditionally difficult; emotional difficulty is a whole other can of worms. I was able to sit back with a cup of tea and work my way through it as though I were reading a book and despite (or perhaps thanks to) the visual medium, I found it just as compelling. There were moments where I couldn’t click “next” fast enough, and others where I couldn’t bring myself to move on. Speed Dating for Ghosts knows its limits and plays to its strengths, betting it all on its ability to tell a compelling story, and it pays off. There’s tension, suspense, heartache, misery, and a good deal of dark tongue-in-cheek humor that creates a functional world of fiction that both draws you in and keeps you invested, like any good story.

But don’t let the cheeky little characters and the silly premise fool you: this game is glum. You meet a plethora of dead folk, some with stories more miserable than others, and throughout the course of your meetings/dates, you’ll gain a little more insight into who they are, or rather, were. You get to know the benefits of being dead, like free admittance to football games and the best seats in the house, as well as the philanthropic perks, like helping out at a nursing home. 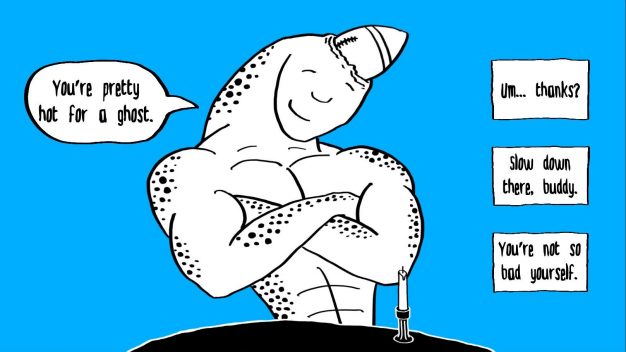 The subject matter is heavy, and some of the stories you delve into are difficult to read. But the most impactful thing about Speed Dating is its premise, the sum of its parts. The entire game is shot through with what can only be described as a sunny sort of nihilism. From the get go, upon entering the speed dating event and talking with Fran (the organizer), you are shown (if not outright told) that this is an exercise in futility. You’re dead, so what are you hoping to accomplish here? Are you trying to make friends? Find someone to love? A partner in crime?

This shifts the premise immediately from being a cutesy, whimsical game about sweet little spooks finding love in the afterlife, to one about the intrinsic insignificance of mortality. What does it matter if you help Gary remember his death? It won’t change that he’s dead, and there’s nothing he can do about it. Even agreeing to meet the altruistic Hattie’s husband at their retirement home is pointless; he’s brain dead when you get there, kept alive against his will, and there is nothing to be done. You can comfort them, but what comfort can there be when they have no life, no future? 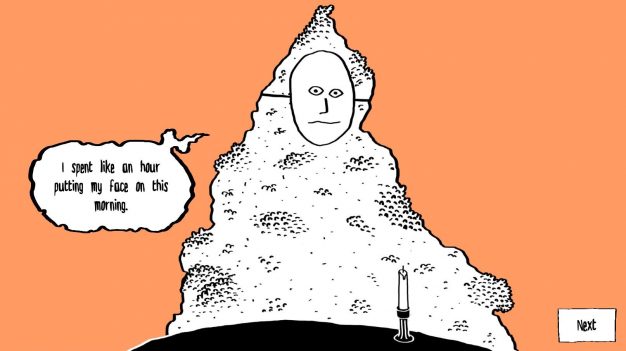 That’s the beauty of it: you can’t help but care for the spirits you meet. You feel for them as they divulge to you their regrets. Their hurt and confusion. And you try to help them, in any way that you can, because even though their lives have ended, the person they were is still just sticking around, caught in the ether of time where they can only observe the present, or look back on the past.

So yes, it’s a depressing game. But it’s lovably depressing, and if you’re like me, you’ll find yourself curled up in a little ball on your couch at two in the morning, torn between a existential angst and warm contentedness, wishing you had just a little more time with these dearly departed characters. And, to me at least, that’s the whole point. 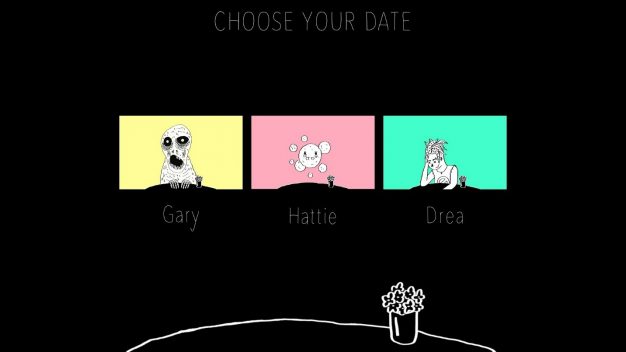 Speed Dating for Ghosts isn’t for everyone. It’s not a traditional game with a goal, or a definitive end, or even anything to do. But it’s charming, heartfelt and makes you think, and for less than $10 ($12 for us Canucks, eh?) it’s definitely worth a try. Just be prepared for some soul searching, and go into the game with the understanding that you will be confronting frank discussions of death and its consequences, both humorously and not. And I for one will definitely be keeping an eye out for future Copychaser Games, because anyone who can make me want to give Gary a hug is really somethin’ extra. 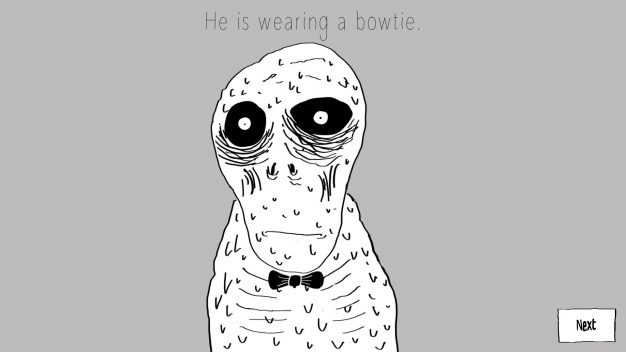 Seriously, when he first popped up on my screen I screamed.

By the end of the date? I was calling him Gare-Bear.

A quirky, indie dating simulator for those who aren’t afraid to get real

+ Intriguing story-line that makes you… feel things.
+ Visually appealing and unobtrusive; moves organically through each story in a way that keeps you invested and in the moment.
+ A plethora of quirky ghosts with unique personalities and adorable character art.
+ The original score for the game is marvelous, and fits the tone perfectly.

– Not for everyone; its an emotional roller coaster, and if you aren’t a fan of visual novels, you might want to steer clear.
– It’s quite a short game.
– The speed dating cycle tends to get a little monotonous and repetitive, especially if you are looking to complete every ghosts story-line.