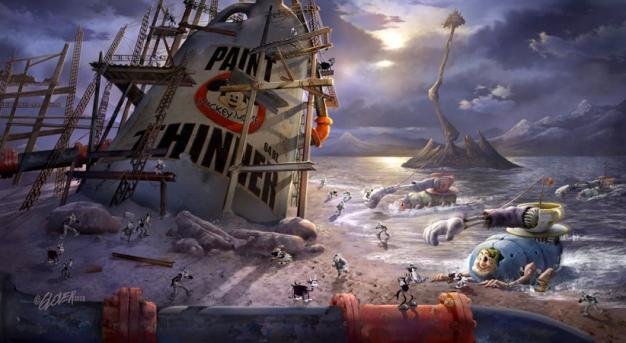 It’s been a long road for Epic Mickey. According to Junction Point Studio head Warren Spector, the Disney think-tank was throwing around ideas way back in 2004, more than a year before Spector was even remotely attached to the project. After a brief hiatus, he turned down a project with John Woo to fully commit to the project in 2007, and after three years of actual development, one of the most ambitious Wii games ever created is under two months away, and Spector couldn’t be happier.

He was smiling the entire time I saw him at one of the numerous round-table discussions he held for the press over the three day PAX weekend, happily answering any question thrown at him; a mark of a highly proud creator confident in his product’s ability to stand on its own. “I think we’ve made the best Mickey of all time, in any medium” is a rather strong statement considering the near century worth of variations on the most popular pop culture creation in human history, but after seeing the game with my own two eyes, he may be right.

Before the round-table began, I headed over to the absolutely gorgeous Epic Mickey booth to try it out. The opening of the demo introduced the combat, as I was greeted by some slimey creatures interested in turning Mickey into a pile of ink. My options consisted of easily disposing of my enemies with paint thinner, or I could paint them to make them into my personal minions who would then attack the remaining enemies.

The paint thinner is the most efficient and easiest way get through most situations, but using the thinner dissolves whatever it touches, so the moral balance involves deciding how much of the world you’re willing to destroy to help Mickey on his quest. “Mickey is a hero, but what kind of hero is he?” was a question posed by Spector, as using thinner isn’t inherently evil since you’re always working towards a common goal, but to what degree decides how the world around you views Mickey. 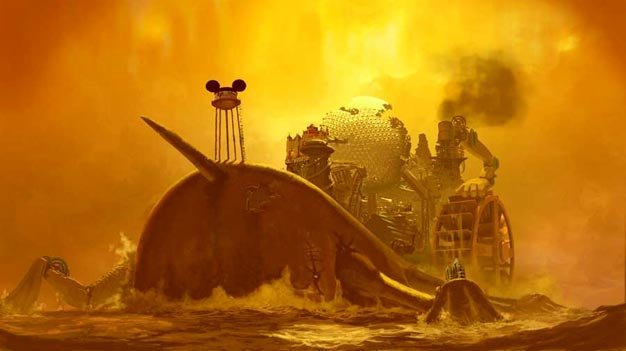 After that, I played a couple of the 2D platforming levels, one of which was inside a clock tower while the other took place in Mickey’s dog Pluto’s dream world. These levels are pure platforming with rotating surfaces and lots of pitfalls. They required a surprising amount of skill, especially if you feel the need to collect all the extra tickets and movie reels available in each stage.

Epic Mickey itself is shaping up to be a great game. From what I played, it’s a wonderfully imaginative title with numerous ways to approach each obstacle. I was particularly impressed by its ability to mesh so many different visual styles from various eras of classic cartoons. It definitely feels very Disney, and from a technical standpoint, Junction Point is really pushing the Wii to its limits, but Spector’s team has very much enjoyed their experience with the platform. “The Wii is way more powerful them people give it credit for” said Warren when asked how he felt about developing on Wii.

Disney obviously picked the right guy for making Epic Mickey, as Spector wears his Disney superfandom on his sleeve. He owns over 35 button-down shirts featuring Mickey, which left the Disney PR rep in the room wondering if Disney even made that many. His house is a cornucopia of memorabilia, which includes two limited edition Fender guitars featuring Mickey Mouse. As a child, he used to subscribe to animation fan magazines in an attempt to learn more about the company he loves dearly.

This love is what drove him to make Epic Mickey a reality. When asked how much pressure he was under to make sure the game turned out well, he mentioned that he wasn’t afraid, but he did feel a great responsibility to the subject matter. “I don’t wanna be the guy who screwed up Mickey Mouse,” he said. “I want to get Disney fans to love the game, not just gamers.”

As to what Spector and Junction Point are going to do next, he’s not quite sure yet, but he did have an idea for something. “Boy, I’d love to make a DuckTales game” got a few journalist’s ears to perk up, but he was quick to point out that he’s in no way making one at this point, although he cleverly did want us to write that he said he wants to make a DuckTales game to help build demand so he could.

Epic Mickey is Warren’s 20th title in his illustrious career, and he shows no signs of stopping at this point. It’s clear from the hour I spent with him that there are very few people as passionate about his craft than he is, and the baffling amount of work and research he and his 280 person worldwide crew have put into Epic Mickey will be on display when the game launches on November 1st.