I think that we can all safely say that there is one major rule in gaming. With the exception of certain genres, most games boil down to durviving. Staying alive is a really important factor if you want to stand a chance of completing your goal. But what if a game turned this on its head, making your over-arching goal to die. Interested? Myself and my good friend Will Georgiadis certainly were. Interested enough to have a peek at Suicide Guy, a tongue-in-cheek action puzzler from developer Chubby Pixel, and tell you all about our adventure. 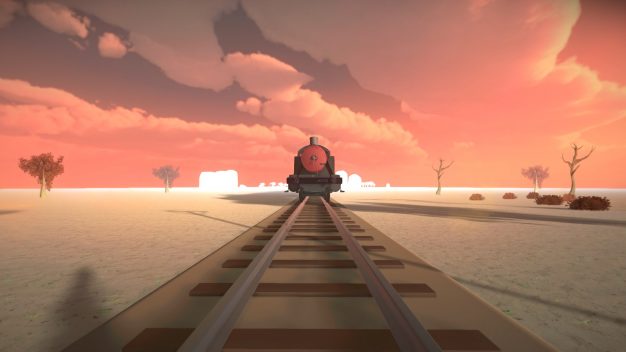 What do you do when you see this coming toward you? Stay put of course!

If I had to summarize Suicide Guy without referencing the game itself, I’d say this: just imagine a mix-tape of every time you got bored cruising the streets of Los Santos, the Mojave Wasteland, or any other suitably vast, open world. What happens when the ennui begins to seep into your gameplay? You take a helicopter up as high as you can, and then you jump, reveling in the mess that your character makes of the pavement below. You make a quick save, walk into Caesar’s Fort, and start hitting people with a sledgehammer until they retaliate.

The small team assisting developer Fabio Ferrara must have realized that virtual suicide is an important part of any real videogame. As a result, Suicide Guy boasts a wonderfully unique premise; kill yourself, using anything and everything at your disposal. Oh, and before you begin hammering me for handling suicide in such a flippant manner, understand this: not one pixel of Suicide Guy promotes, advocates, or otherwise encourages actual self-harm of any sort. 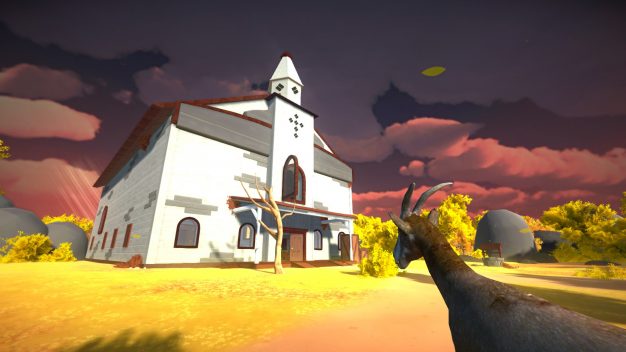 Your character is a bearded, beer-bellied couch potato. Asleep in front of the television, the game begins the moment his dreams begin to get a little crazy. Dimly aware that something terrible is about to happen in the real world, Suicide Guy’s dream-persona quickly learns that suicide is the only way to wake up (turns out, Christopher Nolan was right all along).

Twenty-four different dreamscapes stand between you and your literal awakening. Each presents a more complex puzzle than the last. My absolute favorite was a thinly-veiled, legally-ambiguous knock-off of the world’s most famous cartoon family home. In fact, popular culture oozes from Suicide Guy‘s every pore, as it quite unashamedly mocks everything from Indiana Jones to the Portal game series. It’s all tongue-in-cheek, and will always prompt a few laughs, but I have to admit that the game excelled when it wasn’t trying to imitate someone else’s designs. 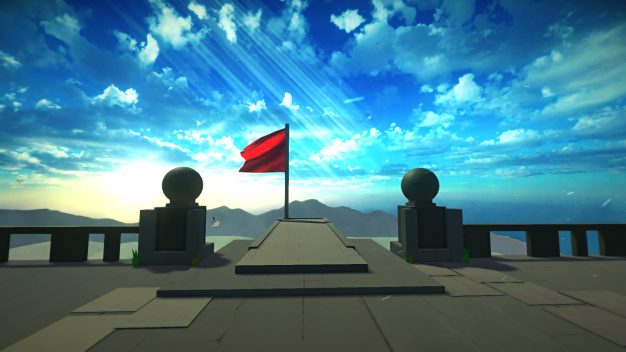 Suicide Guy is lazily made. The mantle mechanics were simultaneously massively helpful and painfully infuriating; leaping from platform to platform was easy, whilst hopping up a foot-high step proved impossible. You’re able to manipulate many of the objects that populate each level, but woe betide anyone who accidentally pushes an object through a wall, or attempts to rotate a large object using your character as a pivot. The visual effects – streams of water, fire extinguisher foam – are laughable, as are the inaccessible, purely aesthetic game areas visible from the actual levels. Sure, Suicide Guy was made for a laugh, but these things are the bare necessities. Right?

If I’m being honest, though, the simplicity did not detract from the enjoyably puzzling feel of the game. Suicide Guy is a puzzle game, and as such, each level is a brain-teaser designed to force you to think outside the box. The answers are not always clear, or indeed possible without bending the game’s physics a little; there is nothing quite like sinking your teeth into a good “how-to-kill-oneself” challenge, particularly when all you are offered is one square room, and a gun that looks suspiciously like it’s waxing lyrical about the cake being a lie. 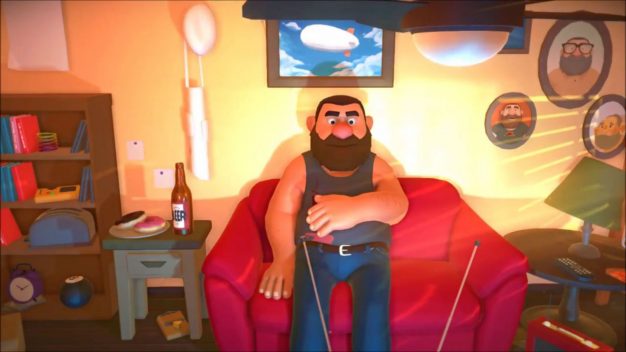 You’ll be killing him a lot before he wakes up.

Suicide Guy blends cartoon artwork with a pastel color palette to waylay any sense of the macabre. The levels are goofy, primitively drawn and rendered with a sickly-sweet glow. Sure, it’s a little basic, but I’ll forgive this sin for the simple reason that Firewatch set the community ablaze not so long ago with a similar aesthetic. The audio was equally goofy, taking its cues from the rip-off world around it and in some cases making John Williams grind his teeth in frustration. I loved the fact that each level contained a few red cassette players, playing the background music for the level in question. More to the point, I loved the fact that these little speakers were occasionally required to complete the level in question.

It’s details like those, that push Suicide Guy from a shamelessly lazy knock-off to a tongue-in-cheek cartooned laugh. And though I may gripe and moan about the low quality and low effort feel of the game, there’s no denying that 24 levels later, I’m sitting here wondering if they’ll make another one. I enjoyed committing suicide, and would happily do it again. 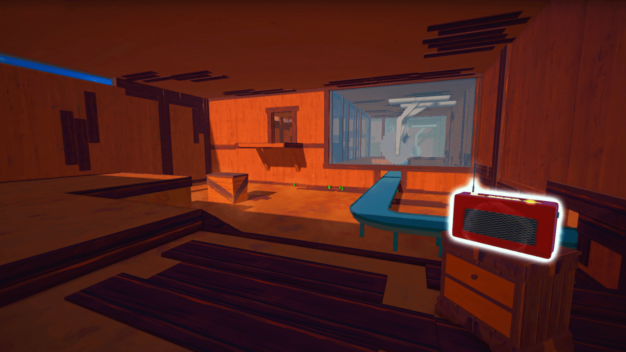 The first point I’m going to make, and I’m echoing Will here, is that Suicide Guy doesn’t parody suicide. The game isn’t out to offend anyone. Equally important, the game doesn’t condone suicide in any fashion, or actually even mention it. This is simply a game about someone scaring themselves awake.

Right … serious bit done, what do I think of the game? In very brief terms, I rather enjoyed it. There’s something whimsical about this title that takes me back to the PS2 generation. I actually rather like the roughly drawn out feel. Yeah some of the effects are coming out of the Ark but as this is a game that nods towards throwbacks I think it kind of asks for a throwback style. It isn’t a tour de force of spectacular art and groundbreaking sound effects (you all know how I feel about games coming over as pretentious for trying to be more than they are), rather it’s a first person puzzler pure and simple. It’s also actually quite a bit of fun. 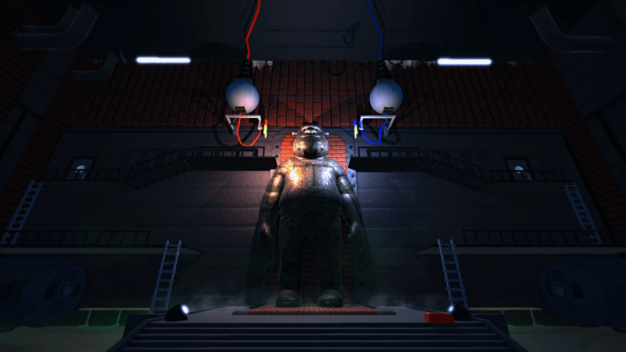 I have to admit I rather liked that each level took you to places that you already knew, even if things become somewhat close to being a bit copied in places. Whether you are romping around an Aztec temple in true Indiana Jones fashion or hopping about a suspiciously familiar Mario-esque landscape it all feels familiar and comfy. The objective in all of these levels of course is just that you have to engineer your own death.

Take the aforementioned temple level. The goal is simple. All you have to do is grab a big gold idol which is dangling like a carrot only feet away from you. Above said statue is a big block of very pointy objects that are obviously going to be coming straight down on top of your head the moment you touch it. This is where the weird sets in. It’s a really strange feeling knowing that you aren’t interested in the carrot, rather the thing above it that’s definitely detrimental to your health. You just have to work out a way of getting to it.

Are we noticing anything familiar about this?

Wandering around a level where you know that literally nothing can kill you other than whatever it is that will be your way to the next stage conjures some very mixed emotions. On one hand you know you’re free to try a bunch of different solutions to the puzzle until you get the right one and that nothing is going to eat you for putting a foot wrong. On the other hand some of the levels actually feel a bit lonely. Take the Mario-esque level I mentioned. You have all the color, the floaty blocks, the suspiciously dead looking plant, (not sure how Nintendo would feel about that actually,) but where are the Koopas and all the other creatures that you would expect? I was left with a very strange empty feeling in places that I’m not sure I’m one hundred percent comfortable with.

With respect to the gameplay mechanics I can see where Will is coming from. Personally I would say lazy is possibly a tad harsh. I’d go with rough around the edges instead. It’s banefully annoying to have a very important puzzle item being eaten by a wall but I think I could overlook this. You have to restart the level when this happens as there’s literally no other way of solving it and this is really frustrating but most of the levels aren’t that long and it doesn’t happen that often. One thing that I couldn’t get used to is our portly protagonist’s platforming, (say that three time’s fast,) skills. I spent more time missing ledges and falling off blocks than I did completing levels. When you’ve missed the same jump for the umpteenth time you realize just how easy rage-quitting can be. 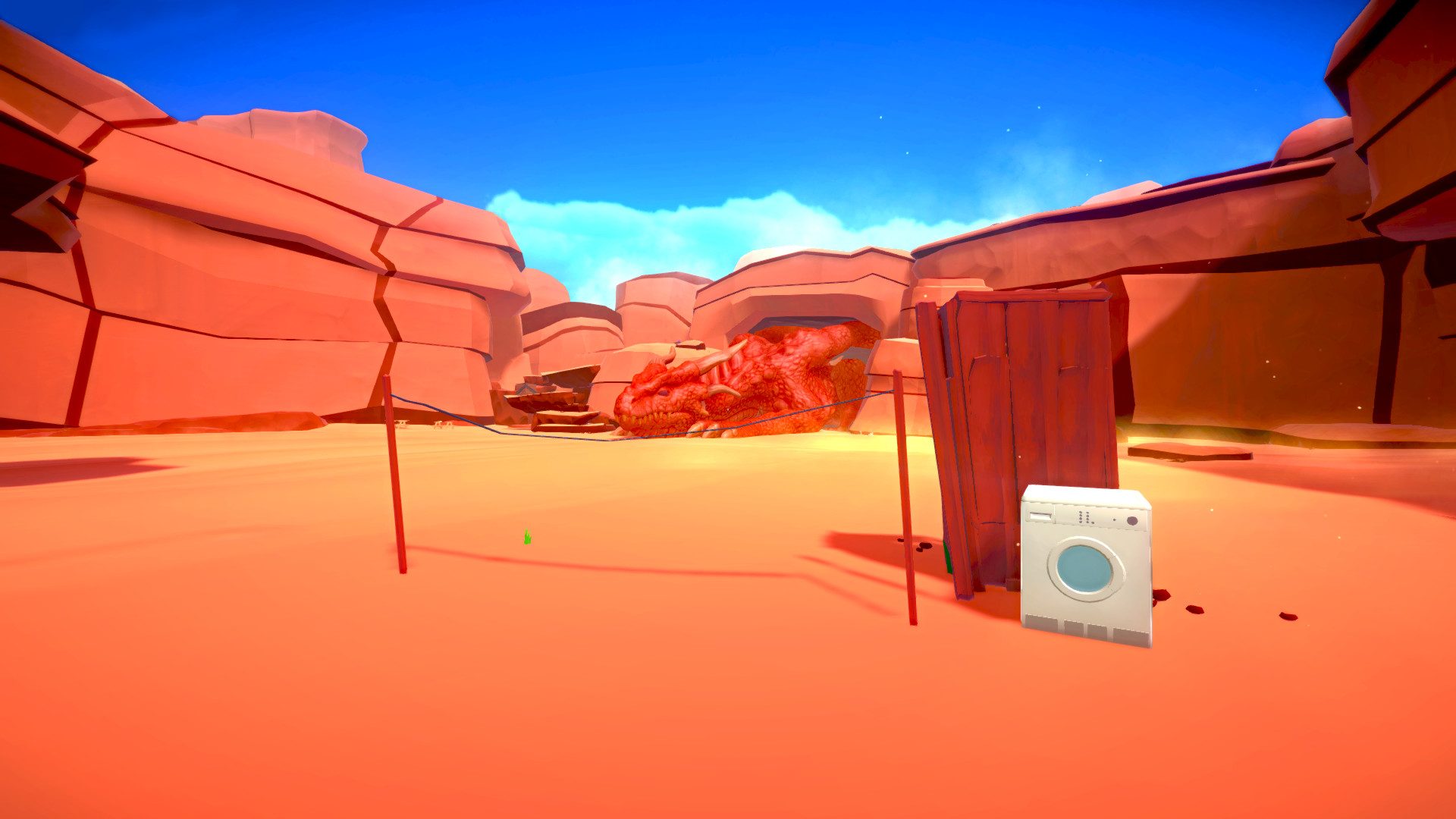 I also agree with Will’s point regarding the pin-point accuracy needed to shift blocks in this game. One graphical irk is that it’s very easy to forget you’re still moving a block. Sometimes although you’ve got hold of something and it’s moving, you aren’t actually touching it. You think you’ve dropped said block exactly where you’ve needed it and move away only to realize it’s following you. On account of not believing that our character can move things with his mind I’m assuming that this is a graphical glitch and it’s bloody annoying.

Relatively small grievances aside this is still a very solid puzzle game and with a few tweaks could be absolutely stunning. As it stands, it’s above average. I’m a very patient gamer and I can put up with a lot and see the core gameplay shining through. If you aren’t a patient gamer and some of the bugs we’ve mentioned are going to drive you completely nuts then this isn’t going to be something you’ll enjoy in it’s fullest. If you like a good puzzler though, I’d definitely recommend giving Suicide Guy your time. It’s charming, funny and actually quite tricky in places. If you’re looking for a new brain-bender this could certainly be it.

This team review is based on the retail copy of the game provided by the publisher.

This really good little puzzler is being hampered by some awkward graphical points and slightly dodgy design choices. If you can overlook these, Suicide Guy is well worth a few hours of any puzzle addict’s time.