Mighty Fight Federation comes to us as part of the inaugural TVGB tournament, and since Emily and I fought it out in this game’s battle arenas, we’ll be giving you our takes on the game itself. For the results of our epic battle, stay tuned. 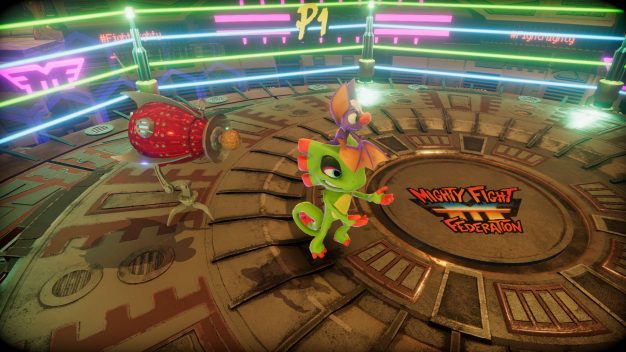 Fortunately, when I say “battle arenas,” I’m not talking about a MOBA; I wouldn’t have agreed to play something like that. Instead, MFF is an arena fighting game, meaning that characters move freely in three dimensions. Think Power Stone rather than Tekken. Right away, I had a little bit of trouble getting used to MFF’s battle style. The tutorial lays things out nicely, but there’s a lot to cover, because the fighting system isn’t like anything I’m used to. There are only two primary attack buttons, with another button to modify them. There are additional buttons for rolling and interrupting enemy attacks. My brain couldn’t quite keep track of both the controller layout and which attacks happened in which situations, so it felt like a lot of button mashing at first. I’m sure it makes more sense with practice, but we went into battle relatively fresh to make it fair. 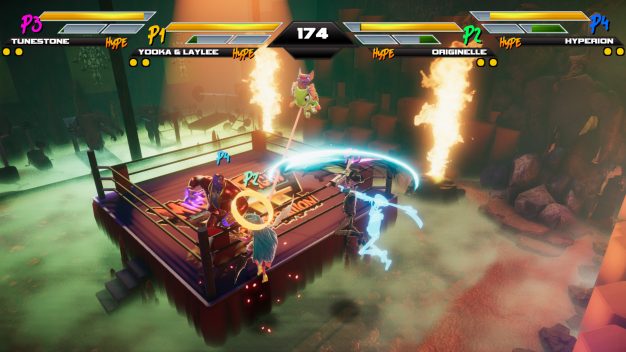 Character can be hit or miss in Mighty Fight Federation, but I like some of the designs. My original go-to was Heckbane, a demonic wolf-like bro (in the personality sense) with a great dash attack. But I ended up having much more success with one of two (or four, depending on how you count it) guest characters gracing the roster, Yooka and Laylee from Yooka-Laylee. In addition to the other guests, Toejam and Earl, characters include a skeletal cowboy musician named Tunestone and a killbot named Killbot. Some of the designs are really interesting and unique, but others are a little more vanilla. In total there are 13 characters, which isn’t bad for a smaller game like this. 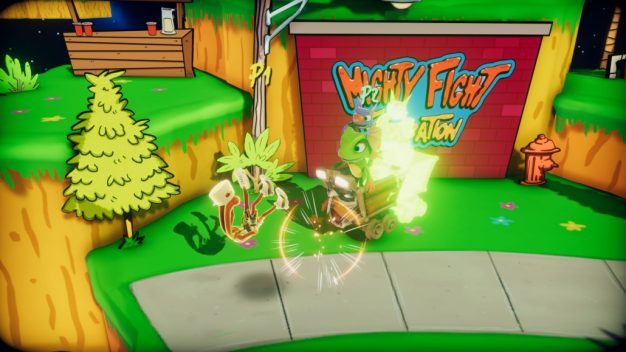 Ultimately, the best thing I can say about Mighty Fight Federation is that it did interest me, and it was fun. It’s not going to become a staple for me or anything, but I’m also not going to forget about it easily. In that sense, it does stand out among the games I’ve played for the tournament. It’s doing something uncommon, with enough style to partially overcome the issues with gameplay. I recommend giving it a try if you’re interested in 3D fighting games.

I’ve always liked arcade fighting games for the hectic button smashing and out-of-this-world finisher sequences. Mighty Fight Federation was certainly all of that and more. With its cartoon setting and wacky characters, it seems childish but packs so much fun it’s great for any age really. True to its claim all the characters are unique and flashy. I ended up feeling comfortable with Krystal, a private investigator turned crystal beast. Admittedly, her range attacks make fights with fellow newbies a little unfair but once Jake got the hang of his duo team Yooka-Laylee (get it?) we were on equal ground. The music is great. Its fast-paced rock ’n roll fits the ‘90s vibe and really gets you excited for the match. 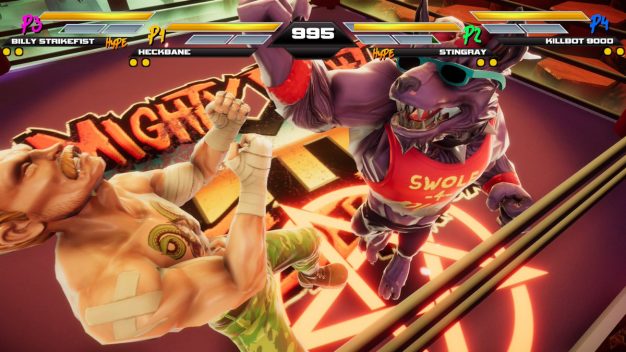 I guess it’s because I was playing PC the I first played through the tutorial with mouse and keyboard. Honestly, unless you are a super hardcore PC player, controllers work best for this game. Once I switched, I was able to get into the flow of things. Jake and I both played around with a few characters before settling on Krystal and Yooka-Laylee. Then, the real fight began. While we just did versus, the game also allows for team battles and even free for all 4 player patches. Combat ranges from ground to air moves, kicking the other player up and using special skills to push the other player away or deal massive damage. Dashing can also take damage and there’s a rolling mechanic as well. both of these really help to cover ground, either getting you away from others or getting you in close to smack em down. It’s a wild ride and has you sitting at the edge of your seat throughout the matches. The graphics are amazing and the battle animations are equally visually appealing.

Might Fight Federation is a great game to play with friends and family. Check it out on Steam!

A mighty fight for the future of TVGB