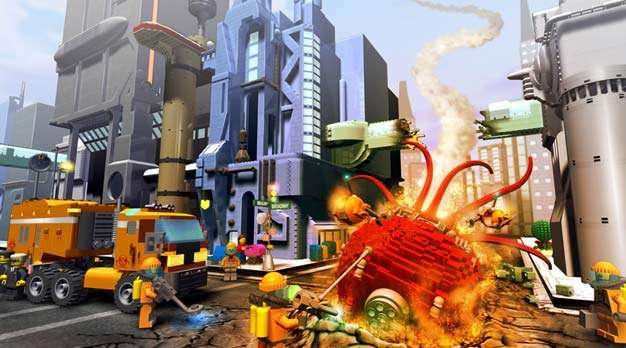 The principle of building virtually anything imaginable within an MMO space is exciting but how does a developer interject storyboard and narrative to plastic yellow people? LEGO Universe will not only have a storyboard but it will entail all the LEGO universes previously established with the popular toy franchise. Players can expect to traverse through contemporary, medieval, space and pirate themed settings and create characters akin to the same attributes. Much to my delight, the game will focus on adventuring and combat rather than the current slew of free-to-play mini game infested MMO’s out there. Although the game is far from a concrete release date, a few other details have surfaced. For instance, pets will be usable to some extent but not much information was given on how.

The MMO will take many design principles from older Traveller’s Tales games such as environments made of mixed organic and LEGO brick oriented structures and the popular one button building to make constructing vehicles and other useful objects easy for everyone. Perhaps the most exciting announced features come in the form of a full featured brick editor that allows players to make their own LEGO creations. Players can display these creations in their own personal space within the game or even order a LEGO kit of it. Or if a player is so inclined to see themselves as a yellow toy, you will be able to order a model of your in-game character for prominent display in your home. Eurogamer got a hands on preview recently so I suggest LEGO fans go check it out for more information.