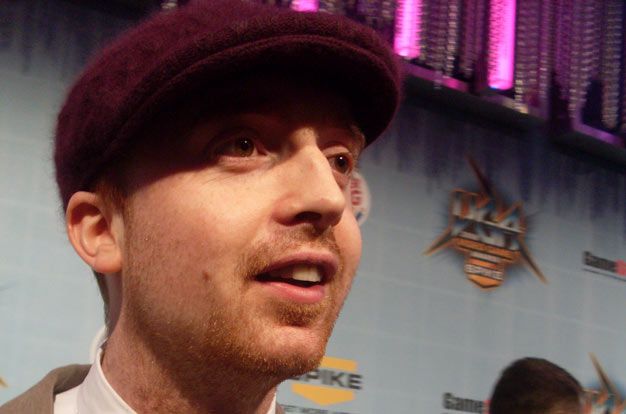 Sunday night while at the 2008 Spike Video Game Awards, we had the opportunity to interview celebrities, both gaming and otherwise, on the illustrious gray carpet. Even though our passes clearly stated “Red Carpet Access,” there was no fooling us as we saw past the ruse of those clever devils and went on with our mission to embarrass ourselves and get blacklisted from future events.

You’ve seen our discussion with Neil Patrick Harris about David Hayter’s package and godlike wisdom about old school gaming. Now we bring you our interview with Media Molecule’s co-founder, Alex Evans, where we don’t discuss someone’s junk, instead focusing on LittleBigPlanet. You know, because they made it and stuff.

That VideoGame Blog (TVGB): How do you feel about LittleBigPlanet being nominated as one of the best games of the year?
Alex Evans (AE): I think it’s amazing this year that so many blockbusters are coming out. Like, my god, the quality of games this year. If you’re a gamer, you’re bankrupt right now because there are so many good games. We’re just really stoked that it’s in that league.

TVGB: And you’re also working on a sequel right?
AE: Yes. Kinda. The whole team is behind LBP, whether it’s a sequel or not, I don’t know. I think sequels are kind of…it’s not a MMO, but the way I think of it about is much more like that: we have a community and we want to support them. I don’t want those guys to buy a sequel and not be able to play the levels they made. What we’re going to do is find different ways; at least a sequel; bigger than a sequel. I want to shock you guys with news that you don’t know what’s coming and you’ll be like, “Oh my God, can they do that with LBP?”

The Metal Gear pack we just finished. It’s coming out and some people assume it would be costumes and stuff and I can’t tell you right now what’s in it, but it’s game changing — it’s really awesomely different. And so, with LBP, we’re going to keep pushing it in those directions.

TVGB: How do you feel about the user-created content? There’s the level that has a functional calculator and another where you can play Tic-Tac-Toe.
AE: There’s a Reversi/Othello one that has all the logic in it and that is insane!

TVGB: Are they doing stuff that you didn’t know was possible?
AE: That one has a language selection screen — you can play it in English or Japanese. We’re watching the YouTube video of it when we first saw it and then checked it out on the PS3 and we’re like, “how did they build this?” Danny [Leaver], who’s here tonight, he’s 23 years old; lead level designer on a lot of the game and he’s like, “I honestly don’t know how they built some of this stuff.” That is incredible.

TVGB: You just want to bring them into your little group and say, “hey, let’s figure this out.”
AE: You know what? He applied to me; he was a real estate agent and he made a mod for Half-Life. I really think young people being able to build something and show off their talent is such an exciting thing for me and I’d happily hire a third of our team who’ve never worked on games before, to just hire someone who shows raw talent in really creative ways, so I’m really hoping I see a CD with LBP levels on the bottom and I’ll check them out.

Real big thanks to Alex Evans for talking with us even though we look like serial killers. And for giving us hope that even if we’re street pharmacists or pizza makers, as long as we have level design skills, there’s a silver lining.