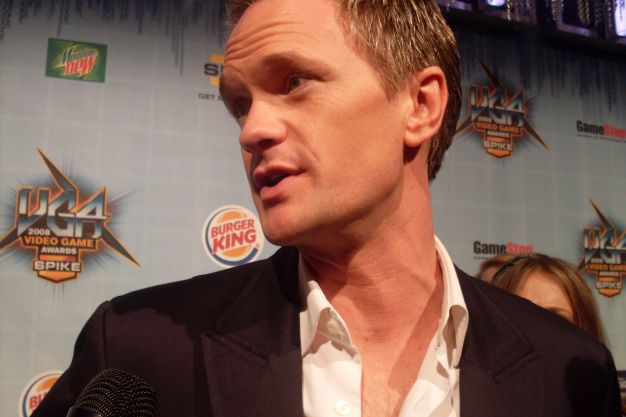 They say the first step in recovering from an addiction is admitting you have a problem. So consider this post our first step. We here at TVGB have a Neil Patrick Harris problem. Yes, we are trying to work through it, trying to limit our contact with the star, but it’s a little hard when you meet the man face-to-face. How did we meet him you ask? Well, Harris just happened to be walking down the gray carpet at Spike’s 2008 Video Game Award show, and we were there with recorders in hand. Luckily, he was kind enough to give us a little Q&A time about his experience with videogames, his work on the upcoming title Eat Lead: The Return of Matt Hazard, and his collection of games.

We didn’t get enough time to really dive into the head of the man, but we did learn a little about his past history with games, and his skill at Joust. Hit the jump for the full transcript, and be sure to check back throughout the week to see more of our interviews with other carpet-walking celebrities, including Hideo Kojima.

TVGB: What was your first experience with videogames?
NPH: Pong…and Asteroids. Old school. I was little but I got good with Joust and I like the first Star Wars game.

TVGB: What consoles do you own?
NPH: I own a Wii, which I love and probably play the most. I own a Xbox 360 and I’m not at all well-versed with the networking with the headsets. Totally foreign to me, like Facebook, I have no idea what it means. And I have a PS3 as well and I play almost none of them. I’m the jackass that buys every game console and every game that’s cool and every new thing that comes out and never plays them. It’s not from a lack of interest, it’s from a lack of time. Cause now you have to commit to, what, 60 hours per game?

TVGB: Are you gonna play Matt Hazard?
NPH: Of course, I have to! It’s weird, I did all the recording in 2 days, so it’ll be fun to actually play it and see how it all turned out. When you’re just reading lines over and over, you have no context for it.

TVGB: Compared to movie acting or voice acting for other things, do you find videogames a little looser?
NPH: No, much more rigid, because it’s all inflection and they’re very specific in what they want. I would get a lot of flop sweat the first couple times I did voice over stuff because I felt like I was doing them wrong but they just want real specific things. So, you say, “Get out of here!” and they say, “Ok, but now he’s 20 yards back,” “Get out of here!” [stronger emphasis] then, “Yeah, but keep the voice low.” You just have to give them every option of everything over and over, so it’s more rigid.