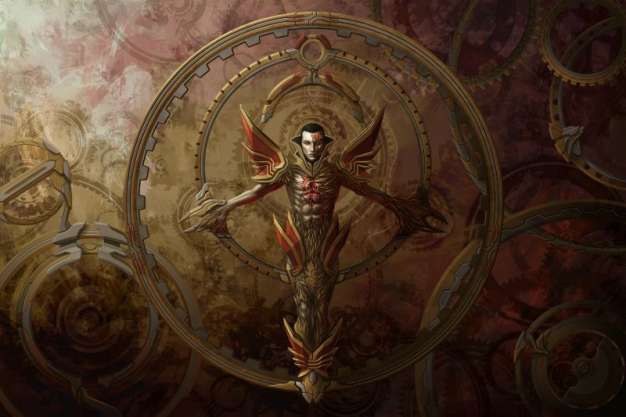 Can’t a dude just chill in his H. R. Giger Gyro Gym™ without you reading all sorts of sci-fi symbolism into it?

The combination of epic space opera and casual puzzle game sounds like the product of prescription medication abuse, but Puzzle Quest: Galactrix is shaping up to be just as awesomely addictive as its swords and sorcerers predecessor, Puzzle Quest: Challenge of the Warlords.

Even though the character class selection has been limited to a simple gender choice, the actual gameworld is much grander in scale, almost dauntingly so. In Galactrix, factions control everything, from shops to ships to entire star systems, even sanctioning the different missions you will undertake as attempt to prevent humanity’s extermination at the hands of the Soulless, Borg-like bastards created in a twisted Megacorp experiment. How you interact with the different factions, gaining or losing standing depending on your choices, plays an integral role in the story. It also plays an integral role in preventing your body parts from being scattered in the freezing void of space, as aliens and humans alike tend to hold a hell of a grudge.

After the jump you can get to know the 14 different factions, including the 4 most common Human Megacorps and the 8 most powerful Alien Races. The remaining 2 factions are always hostile and include the Pirates and the aforementioned Soulless who you will learn more about as the game progresses.

The four main Human factions all grew from the four Megacorporations that created the LeapGate system.

MRI
MRI (Multinational Resource & Investment) Group instigated the LeapGate project, providing funding and negotiating the collaborative agreement between the other three Megacorporations. They are staffed entirely by telepaths, and have challenged ethical and moral standards numerous times by embarking upon selective-breeding programs that try to enhance their telepathic powers.

Lumina
Originally Lumina was not really a corporation in its own right; they were still a militaristic right-wing religious group. They were in the unique position however of being able to provide the researchers and libraries necessary for the development of this new quantum technology upon which the LeapGates relied. Lumina still inhabit the planet Earth, where they have secretly guarded and protected millennia of knowledge, research and discoveries.

Cy-Tech
CyTech provided the Software and AI systems both that operated the LeapGates and helped their delivery to the correct location around distant stars. Growing from humble beginnings as a simple software company, theirinvention of intelligent worked drones propelled them into a position to accept a role on the LeapGate program.

Trident
Trident Corporation provided the ships and engines necessary to move the LeapGates through space; they were the first group to develop faster-than-light travel, albeit it in unmanned ships. Trident are the easiest Megacorporation to understand. They build ships of all shapes and sizes, but mostly military ships. The Trident fleet is the biggest in the galaxy. Many of the other Megacorporations fear that Trident may be growing too powerful.

There are many dozens of Alien Factions in the galaxy, but only the most interesting and powerful are listed here.

JAHRWOXI
These scruffy little hairy creatures are annoying and dishonest. They will steal anything that is not bolted down, and will lie about incessantly on almost any topic.

VORTRAAG
These lizard-like creatures put up the strongest resistance of any race the humans encountered. Ultimately they were no match for the Empire, but their sheer ferocity in battle and willingness to die fighting inflicted noticeable losses on the Empire. A strong contingent of Imperial Military still exist on Vortraag Prime, to keep the locals in check. Many Vortraag flee their home planet and turn to piracy.

KRYSTALLI
These silicon based life forms are like very slow-moving telepathic rocks. Sadly few of them are left; the MRI Group see them as some kind of telepathic threat and has made every attempt to track them down and eliminate them.

ELYSIANS
These tiny frail creatures were no match for the Empire. Unfortunately, their planet was seen as somewhat of a paradise by the Empire, who promptly enslaved them and set up the planet like one enormous holiday resort.

QUESADA
The Quesadans are a deeply religious tall, thin and elegant people. Their religion is one of the few officially sanctioned by the Empire, and probably only because their planet seems to be full of ancient secrets & treasures (the locations of which are known only to the Quesadan High Priests).

DEGANI
Not only is the food produced in the Degani System renowned throughout the Galaxy, but the hospitality of its people is second-to-none.

PLASMIDS
These creatures exist in a liquid state, composed entirely of small living crystals that move through a watery medium. They are almost invisible to humans until they try to communicate, using a strange gurgling sound.

KECK
A widely-traveling merchant race, the bird-like Keck can be persistent and annoying.

These factions are hostile to the player and should be avoided unless you are looking for a fight.

PIRATES
Usually found in the outermost star systems, Pirates prey on transports and travelers passing through their systems. Systems such as Gomorrah are home to massive pirate bases where law has all but been forgotten.

THE SOULLESS
Created by the MRI’s twisted experiments, these creatures are an improved form of humanity – smarter, faster and possessed of no morals or inhibitions – only a desire to perfect themselves even further.