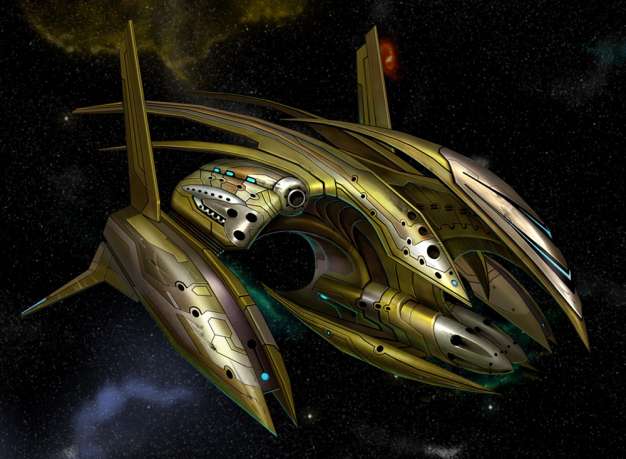 Having already introduced you to the various factions in the role-playing, jewel-matching space opera that is Puzzle Quest: Galactrix, it’s time for you to get to know your ships.

Yes, that’s “ships” plural, as in more than one collectible, customizable space ride in which to tool around the universe. Galactrix has more than 30 different ships spread across 4 different categories, allowing you to fully pimp your three-ship fleet for any occasion. Need a heavy-hitting boss killer? Warship. Need an item-hauling space semi? Capital ship. Need a battle-fleeing escape vessel? Fast ship, you pathetic coward.

Hit the jump for details on some of the ships you’ll be piloting in your galaxy-spanning quest to save humanity, and look damn good doing it, too.

These ships have large reserves of Red Energy, useful for outfitting with lasers and missiles. They focus on directly damaging an opponent. It’s always good to keep one of these heavy-hitting ships in your fleet for when you find that inevitable boss fight! Take care with some items like Mines and Minelayers though, because they can sometimes do as much harm as good.

These are useful ships to have if you plan on spending a lot of time running away from encounters or smuggling contraband. Of course PSI Power will also let you escape your enemies so you may choose to concentrate on that instead. Keep in mind that many of the fast ships are also small, so you may be in trouble if you get caught. If you can manage to obtain an Acheron Ghostship though, you should be able to outfit it with quite a bit of equipment.

These ships have a large amount of Green Energy, representing the massive computer systems they have on board. Green Energy is useful for buffing your own ship, so Science vessels are often good defensive ships to keep around when fighting some big enemy capital ships. A science vessel with auto-repair functionality can last a very long time in combat.

If you want to make your fortune mining, then it is worthwhile to reserve one or more slots for these behemoths. Your cargo capacity is determined by adding together the capacity of each ship in your fleet, so it is never a waste to keep Cargo Ships around. Although these ships are not good in combat, they will save you the effort of constantly visiting distant stations to get the best prices for your cargo.

These Ships have a high reserve of Yellow Energy. This is very useful for manipulating the board and can be a great way of denying a specific enemy the energy he needs to activate his most powerful items. In fact it is often worth keeping a long-range vessel and occasionally customizing it on the fly before a battle with a tricky opponent. Keep an eye out for Thrusters, Waves and Transformers that can be outfitted to these ships to target various gem types in play.

These ships have 8 item slots and can be literally filled with all sorts of items. They are often slow, but also have good cargo capacity, so you probably want as many of these in your fleet as possible. However they are very expensive to buy, and even if you can find the plans it is very difficult to build one yourself!

These ships are obviously very versatile. Your biggest problem is locating one or finding all the cargo necessary to create one yourself.