This is Sparta! A very long time ago during sometime during the 5th century, Greece was in turmoil. Threats from the Persian Empire and their leader, Xerxes, had the city-state under fear of Persian and his wrath. Amongst such harsh times, it became impossible to remain peace-abiding, thus the brave warriors of Sparta rose, and made it their vow to win back their home, even if they had to give up their last breath for it. Sparta is a game which requires critical thinking and planning. It is a strategy game. The objective of the game is to stop the Persian army from taking over your fictional homeland by developing military and political power within the city. 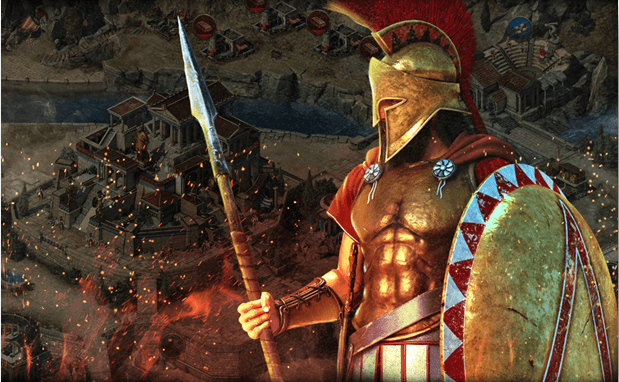 You, Archon, have been chosen by Leonidas to fight against the Persians and their leader, Xerxes, to protect Sparta. You will be leading your city-state to victory from the wrath of the Persian leader and his army. Throughout the gameplay, your city will be your source of resources and wealth. Your beloved city is also the heart of your army, providing it with much-needed resources to keep the war going.

Build your city and command your army to victory, however, remember that only a clever democratic strategy can guarantee success. You need to strengthen your ties with former rival cities so that they will provide you with aid to gain victory under Greece’s name. Remember, you must always consider that your choices will affect your fate.

In order to bring peace about your city-state, you must develop agreements, on mutual terms, with your rivals so that the threat can be taken care of. By signing such agreements, you will be able to successfully increase Greece’s potential for success and the strength of your army to level it with Xerxes and his Persian army. A new article of agreement will come into being each day so that your bonds with the rivals remains beneficial for everyone involved. If you think that the terms of the agreement are not fair, or are not good enough, you can back off, and instead, offer a trading bargain. You need to keep all agreement terms from your side, also, you must upgrade them so that with each upgrade, your city will become even more powerful.

Another very important part of staying in power is using the resources you have wisely. Since you are in a state of war, it is important that you don’t engage in needless spending and upgrade your defenses and army simultaneously. Their production will be dependents on the farms, forges, and lumberyards you have. You can save and stock supplies in the warehouse and grain in the granaries.

Remember, having a large army will not be enough to guide your people to victory, you must bring change and development in order for those Persians to back off!