Nintendo Switch owners and fans of The Witcher can rejoice as Thronebreaker: The Witcher Tales is now available on Nintendo Switch. The game, created by CDProjektRed, has been ported to the Nintendo Switch by Crunching Koalas, who have been responsible for porting another CD Project Red property in Gwent: The Witcher Card Game to iOS, as well as 11 Bit Studios’ survival strategy game, Frostpunk, to the Playstation 4 and Xbox One.

With fans of The Witcher series, which began as fantasy novels by Polish author Andrzej Sapkowski, reaching new heights thanks to the release of the Netflix show last month, it is likely many will already be familiar with Thronebreaker, which originally launched on PC in 2018. Rather than following the adventures of the much-loved series protagonist, Geralt of Rivia, Thronebreaker instead tells the tale of Meve, the Queen of two kingdoms in the Northern Realms, Lyria and Rivia. The story is set against the backdrop of an imminent invasion from the Nilfgaardian Empire, who fans of the series will know to love nothing more than a good old invasion of the Northern Realms. The story features dialogue options that can impact how everything unfolds and includes animated cutscenes that help move the narrative along, in a manner similar to a visual novel. 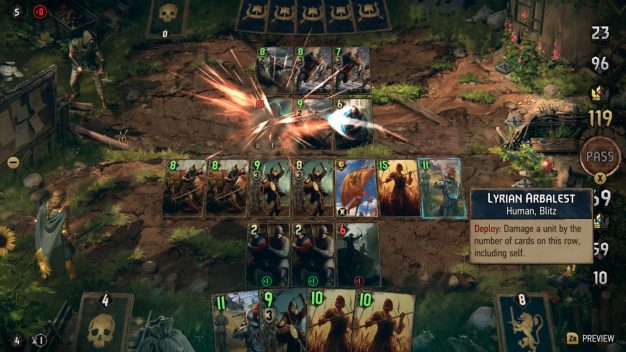 The narrative isn’t the only thing that differs from usual entries in the series however, as the gameplay comprises a unique combination of point-and-click adventure and turn-based card games. Battles are settled in a manner similar to the series’ much-loved pastime, Gwent, which many Witcher 3 veterans if they are anything like me, will have likely sunk countless hours into before eventually progressing the games’ main story. When not taking place in turn-based battles, players will be exploring the world and solving puzzles with the goal of building Meve’s armies to repel the Nilfgaardian invasion.

The game is available now in the Nintendo eshop and is also available on other platforms, including PC, Playstation 4 and Xbox One.

Our review of the game on Playstation 4 can be found here.

More information on Thronebreaker: The Witcher Tales can be found here.