I should start by letting you know that I’ve never played No More Heroes, nor have I played its sequel. This game and its main character acknowledge right off the bat that many players are coming into the series brand new. That being the case, I wish it was written with newcomers in mind. The gameplay is definitely different, as this is a much more simple game than its predecessors, but all the same I feel like I’m missing something as I play through Travis Strikes Again. That being said, there are some good things to find even for me in this title, so let’s take a look through this No More Heroes spin-off. 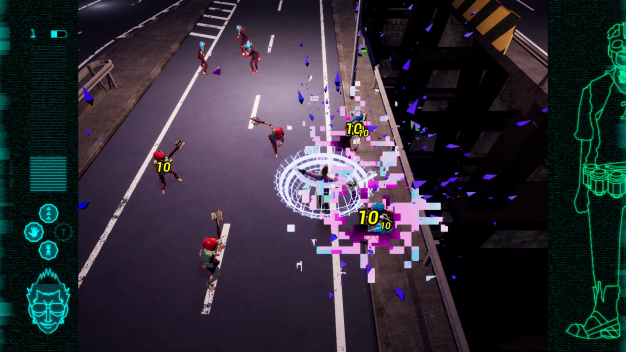 The gameplay is indeed simple. It’s your typical hack-n-slash affair, with special moves and waves upon waves of enemies. There are two different types of special attacks Travis can use, one activated by the R button and several that can be mapped to the directional buttons (or the D-pad if you’re using a Pro Controller). This is a little bit confusing, especially as you sometimes have to input certain commands alongside the special moves. But you will cut through the baddies quickly. And then there will be more. The gameplay generally follows this repetitive pattern. Don’t get me wrong; it is fun to play. The gameplay is solid enough, and I do sometimes enjoy a simple hack-n-slash game for a little while. There are also a few things to break up the monotony, such as puzzles and a racing mini-game. But on the whole, while the game may be fun in short bursts, deficiencies in the core design prevent me from dedicating time to finish it. 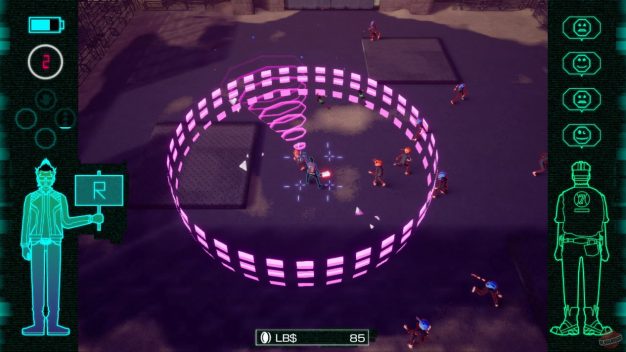 I mentioned above that this is my first foray into the series, and the game was presumably meant to be accessible to newcomers. That being said, I have a feeling that I’d understand Travis Strikes Again a bit more if I had played the original games. There are returning characters that are not fully introduced, and the game lacks a basic explanation of the main character’s backstory. Beyond that, every cutscene and piece of dialogue is dipped in seven different layers of crazy, which can be both a positive and a negative. Coherent plot is not what this game is about, but if you don’t care about the story, it doesn’t really take anything out of the game. 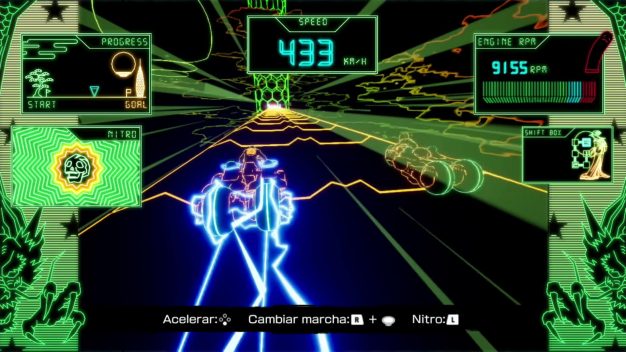 I think I’ve made it clear by now that the story and gameplay aren’t for me. But there is one area where Travis Strikes Again excels: the visuals. This game will assault your eyes with neon glows and bizarre designs. Each section of the game takes place in one of several games-within-a-game, so there are several different visual styles at play. But no matter what, it’s going to look cool. This sort of aesthetic seems to be pretty popular lately; long time viewers of my old show, TVGB ViveStream, will remember a game called New Retro Arcade Neon which used a similar visual style. But it isn’t overused, and the game fully embraces it, making from it a unique style of its own. The aforementioned racing section is especially cool, as shown above; I only wish I enjoyed the gameplay enough to get that far into the game.

Travis Strikes Again is probably not the return that fans were hoping for, and it’s not likely to draw in a ton of new fans either. But even for newcomers, the game has some charm to it. The concept is interesting, and the gameplay is fluid. There is definitely an audience for Travis Strikes Again’s brand of insanity, and it’s at least worth watching some videos of it to see what I mean. But for me, it just doesn’t strike hard enough.

Holding out for a hero