There is absolutely nothing like playing something utterly silly from time to time. As gamers, we take our craft far too seriously  so every now and then it’s nice to just sit back and have a bit of a laugh. The game in question today is Trover Saves the Universe and if you are above a certain age, it’s tremendous fun. Just so I don’t get eaten by angry parents, the below trailer is for adults. If you’re not an adult skip, past and carry on reading. There, I’ve done my bit – disclaimer disclaimed.

Trover Saves the Universe is a game by Justin Roiland, one of the co-creators of Rick and Morty and it isn’t a game for kids. The language – when it isn’t being a bit foul – is just downright rude. This is not a complaint, rather a bit of a warning. I’m a really big fan of adult cartoon comedy (because I’m still mentally sixteen) and was totally expecting juvenile fun. If you don’t know what Rick and Morty is or anything about that style of humor, go and watch a few episodes before letting your younglings have at it.  There is a mode that censors the experience, but I honestly think that would be destroying the soul of the title. This is a game that’s full of swearing, lewd comments, and general adult tom foolery. Removing this would detract from what is a really fun experience.

You take on the role of a Chairorpian, a member of an entire race of people who never get up and spend their days sitting on their backsides with gaming controllers in their hands. Does this maybe make you want to look in the mirror? There are four all-powerful, neutral beings called The Abstainers. Glorkon, one of the four has gone mad and has taken your dogs and stuck them in his eye sockets making him all powerful. You and an eye hole monster called Trover have to go out and stop his evil schemes. 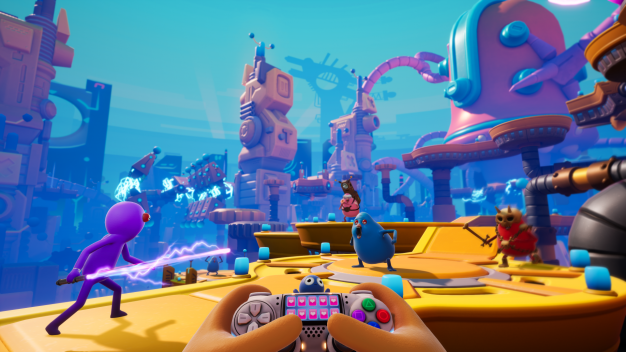 The world is gorgeous … even if everything does want you dead.

Trover also likes shoving things into his head. In his case he rather likes power babies. These strange little creatures are hidden throughout the game and collecting them will power Trover up with more life. This game is part platformer so there have to be collectables. Small green monsters are a perfectly reasonable replacement for feathers any day. You also get upgrades as you go which either alter your chair or give Trover abilities such as the double jump, ability to roll etc. This is important for navigation. In your case,  as you never get off your rear, having a periscopic chair is vital to your continued existence, you get this ability really early on so you’re set from the start.

Trover Saves the Universe is part puzzler part platformer and the puzzles are fun and engaging if sometimes impossible. Sometimes it’s actually worth listening to what Trover has to say to you. One of the puzzles you’ll face genuinely can’t be completed. If you pay attention to what your purple friend is saying you’ll figure this out straight away. Alternatively you can ignore him and just waste a bit of your time. You won’t solve the puzzle but you will get an achievement so that’s entirely up to you. If time-wasting is your thing and you can’t be bothered playing the game … that you’re playing … you can just throw balls of paper into a basketball hoop. Go score a hundred, I dare you. 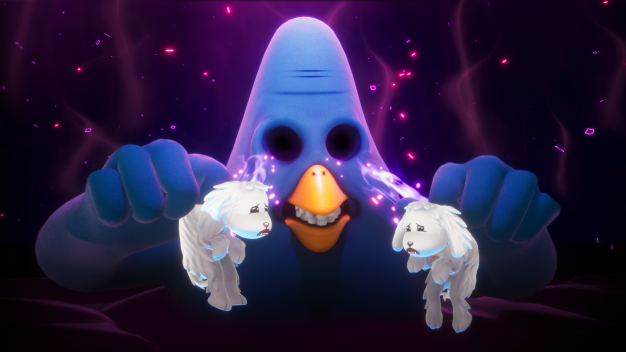 What is it with sticking foreign object into your eye sockets?

As a character you can’t do a massive amount, which is why you need all the help Trover can give you. This goes both ways. A lot of this game is about perspective. Your chair can rise up and down and you’ll be using this ability alot as you go. It’s pointless jumping Trover over an object that you can’t see the other side of.  Raising your chair a level will give you a better view of what you’re getting him into. The same goes for distance. You don’t move in this game so you can’t just follow him around.

The only way to get you to go anywhere is to run Trover onto a teleport node which will shift you to a new location. Some of these points can only  be seen clearly from a different altitude. The same goes for collectables. Different vantage points will allow you to see levels differently and the power babies that Trover craves can be a bit tricky to spot. All in all this is a necessary mechanic that has been used properly within the game rather than something throw-away that doesn’t do a great deal for you. I like when an idea is implemented properly so thumbs up from me. 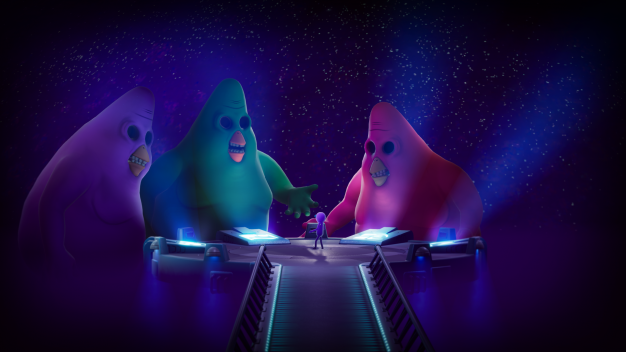 The Abstainers. They abstain … obviously

The narration is what makes Trover Saves the Universe really stand out. Your companion talks to you pretty much constantly through your adventure. What he’s saying isn’t usually polite, but it’s what gives him character. There is nothing worse that having a side-kick that has the personality of a brick. While on this subject it’s kind of difficult to decide who said side-kick actually is.

You’re technically the main character, yet it’s you that’s controlling Trover so it’s probably fifty fifty who is taking the main role. It’s not just the voice work that has been done on your companion that’s of note. All of the NPC characters are very cleverly created an voiced. Each NPC you meet feels like a fleshed out character rather than a copy paste from somewhere else in the game. The sound and voice work that has gone into this title is superb and you can see just how much thought and effort has been put in. 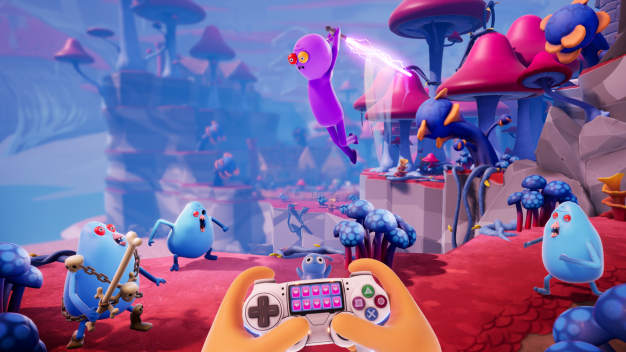 Combat is intuitive and fun.

Graphically Trover Saves the Universe is wonderfully colorful and very nicely rendered. The who experience feels like your playing through a cartoon which is clearly what the devs went for. Think Crash Bandicoot if someone made the world bigger, more surreal and slapped a whopping big R rating all over it. That’s kind of what we’ve got here and it’s absolutely marvelous. Trover also controls like a dream and being a console release it should. I’m not going to give you a run down on button-mapping but everything is really user friendly and easy to pick up.

Moving back to the subject of visuals for a second, this game plays perfectly both with and with a VR headset. Without VR Trover is a perfectly fun serviceable platformer. Visually the game feels like it should be a VR game whether you own all the kit or not. Without the helmet if you look at your own character you can basically just see a set of legs, bit of chair and a controller. Pop a VR headset on your face and the game switches to full VR mode which just makes everything even more surreal. If you have PSVR play the game with and without, you’ll get a slightly different experience but one isn’t by any means worse than the other. 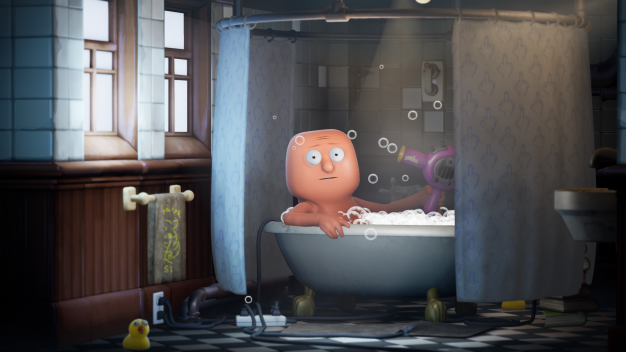 Just a dude in the bath. Or is it?

All in all this is definitely worth a punt if you have a silly, slightly juvenile sense of humor. This title isn’t particularly difficult and doesn’t feel massively long. I say doesn’t feel  as opposed to isn’t because I was enjoying the experience so much that everything felt like it was moving along really quickly. You’ll be able to extend the fun by going back for all the collectibles. Trover promises you something really special should you succeed. I would also recommend playing through the game more than once. I basically murdered everyone that I could on my first run through. I’d like to see what happens if I don’t act like a raging psychopath. For those of you that just like a bit of silliness on your gaming menu you could do far worse than checking this little gem of a game out.

This review based ob a retail copy of the game provided by the publisher.

I brilliant way to kill time

Trover Saves the Universe is a fabulous offering and really knows what audience it’s playing to. If you like Adult Swim humour and fancy doing something slightly crazy this is a must play game. I really don’t think this is a game for kids. You can cencor the experience but for me that would be taking the soul out of the title. Equally, if you are easily offended or don’t like a lot of foul language I might look elsewhere. One again you can play in cencored mode and as the game is in and of itself enjoyable still have fun but by neutering the experience I’m not sure you’ll get the same enjoyment as if you where playing the game to it’s fullest. If, like me, you’re slightly immature and love rude and childish humour then Trover is definitely worth a try.