So it’s February. The fun and excitement of Christmas have passed, and for the most part, the gaming calendar is a little bit on the quiet side this time of year. Does this mean we all pack up and go home for a few months? Well no, obviously, I said quiet, not dead. It does mean, however, that we need new and interesting ways to amuse ourselves while we’re waiting for the next storm of triple-A titles to hit the market. What better way to give you lot a few laughs than a team tournament? It’s probably going to be less fun for us but we’ll see. 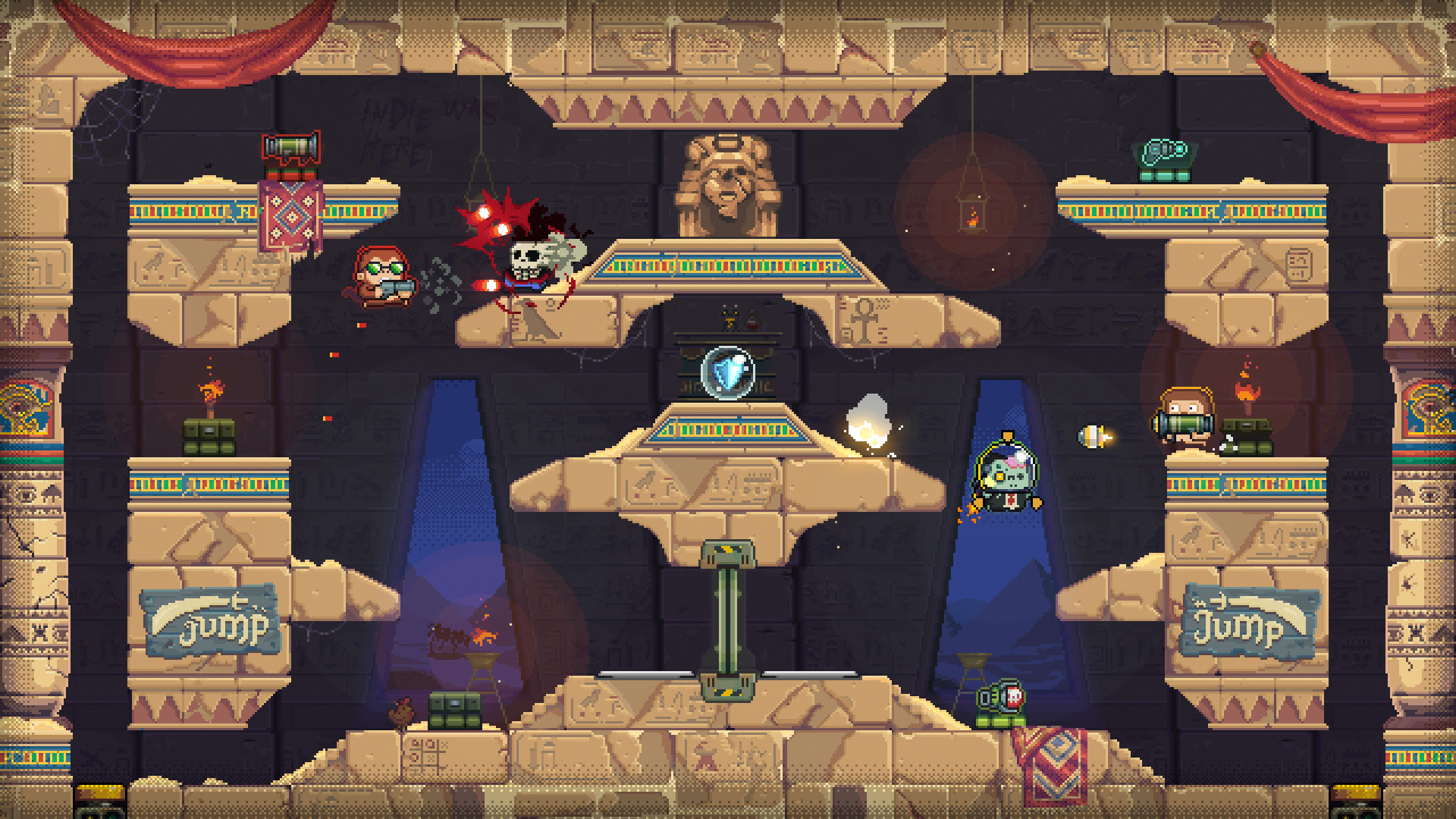 Accuracy is everything. Friendly fire is always on

So I broke some of our talented writers into teams and pitched them off in three rounds of visceral mortal combat. Well okay, not quite but I did choose a game per round to see which group of gamers was better than the other. I also set a few rules to make life interesting. I didn’t let the opposition see the game they’d be playing for any given round until the week we were due to play. There were a few reasons for this. Firstly it stopped any sneaky players from getting really good before they faced off against the others. Secondly, it made choosing the team for that round a bit more difficult and stopped anyone from walking over the opposition because it was their genre. Lastly, I’m just mean and it’s hilarious.

The teams break down as follows. Team 1 consists of our editor and VIVE fiend Jake Sapir as captain along with Garett Mefford and Madelaine Marsh. Team 2 has me as captain (naturally) with Albert E. and my good friend Emily Mullis backing me up. For round 1 of our little match up I simply gave Jake the clue the genre would be shooter and put his mind at rest by telling him there wouldn’t be any online shenanigans here so no Overwatch, Fortnight, etc. How did we get on? Well let’s find out, shall we?

So, as a rule, I’m not very good at shooters. This absolutely doesn’t mean anything where Guntastic is involved because skill means bugger all to this chaos-ridden game. You’ll be getting a lot more info on Guntastic from our Emily but to give you a very quick overview it’s an arena battler…sort of. In Guntastic rounds last the sum total of a princely 25 seconds. In this time you have to waste your opponent in the arena. To add to the madness you aren’t getting a life bar, you’re getting one chance per round not to die and that’s it because this is one-shot-kill territory. Is this going to make for a ton of fun? Course it is!

On account of the nature of this title, we chose to swap team members against each other with the highest overall score at the end calling the victor. How did we get on? Well from my perspective, not bad at all, actually

I have to say I was a little nervous going into my first round against Jake. Mostly because I didn’t want to get completely crucified in a colossally embarrassing mess and start my team on the back foot. We had a practice round, which I won, making me feel a little better about the proceedings. Then we went into our first bout for real.

In Guntastic, it pays to learn your favorite weapons and find them very quickly. Weapon drops are randomized so this isn’t always possible but if you know what you’re looking for and can get your hands on it super fast you’re giving yourself a good fighting chance. In my case it came down to drill rockets, (cause who doesn’t love something that flies through solid objects,) and these cute little walking bombs. I put both these weapons to very good use when I wasn’t running into projectiles Jake was throwing at me and standing there like a lemon because I was looking at Jake’s character and wondering why I wasn’t moving.

In Guntastic, you can very easily kill yourself. Friendly fire is switched on and if you happen to have your head in the way of the buzzsaw you just fired, well, that’s you’re own stupid fault. This game is not forgiving as I think both of us will testify. Killing yourself is not good for several reasons. Firstly, it’s silly. Secondly and more importantly it makes you drop points from your kill score, thus making it harder for you to win overall.

Speaking of winning I managed to whoop Jake two rounds on the trot which made me feel much better about my coming rounds with Garett. Whether it be skill or just dumb luck I beat Garett both rounds leaving no need for a third. I have to be honest though this was not by any means a whitewash and I very nearly lost the second round. Both Jake and Garrett were very worthy opponents and I’m not belittling their efforts at all, I had to work hard for those wins.

Each arena has its own traps and pitfalls. Garett to his credit mastered these quicker than I did. Standing in front of a teleporter that you can shoot through isn’t clever. I got quite a memorable rocket inserted somewhere it very definitely didn’t belong.

Regardless of winning both sets of matches, I had a hell of a lot of fun and I really think the others did too. This isn’t a game where you kick yourself for not being good enough or not learning fast enough. The speed the matches run at means it’s all just hilarious chaos. It’s the sort of game where you’d look a bit silly for rage quitting because everybody is in the same boat. The sheer mayhem Guntastic brings creates laugh-out-loud moments and if you happen to have killed yourself you just laugh harder because this is the essence of the game and the essence of the fun.

So yeah, I think I set Emily up for a nice overall win. The thing is…the lads had been through the wringer already and had practice against another living being. Emily was going in blind. I won’t go into any more detail though, we’ll let Emily regale you from here.

Jake was kind enough to let me get re-accustomed to the controls of the game, then we dived in guns-a-blazing. After the count down we each raced for the closet weapon. Luckily for me, the first few matches set me up with a nice electric gun or a like-wise easy weapon to work with. The last few matches of the first round were not so kind. Needless to say, don’t go for the cannons unless you know how to work them. They explode in your face or in some cases, hit a wall and come right back to you. With a game as fast-paced as this one, not knowing how to use your weapons means ultimate death. Though the first round of three was close, Jake wiped the floor with my blood.

The second round was equally as nail-biting. This time though, I knew better than to go for the cannons. Jumping about like a madwoman, I avoided Jake as best I could. In the first few seconds, I ran around trying to find a weapon that could give me half a chance and we both were on equal ground until I decided looking for a good weapon might not be the best move and went for the cannons. Bad choice. Once I gave up seeking out my preferred guns it was a madhouse. Several matches ended with me taking my own virtual life, leaving Jake with several awkward wins.

Jake won, 2-0 but it was one of the more fun losses I’ve had in a while. The rounds were well played and Jake made for an awesome competitor.

Once again I was bested but this time I stood a much better chance. Garett and I were neck-to-neck pretty much the entire time. At one point I had Garett 5-0 in kills then he quickly climbed up to tie with me. These matches felt much better with regards to skills, at least for me. I was able to go for the weapons I wanted and the madness that is this game felt more slowed down than before. As Garett and I raced around the map, it felt that we both had a better understanding of how to play. We dodged and shot at each other with some structure that made me appreciate the game that much more.

In one case, I went to sneak behind Garett by going through a door that would transport me to the higher level where he was, but he read my move and got me just as I came through. It was one of those moments where you shake your head in disappointment but have to commend the other player for their quick thinking. Another time Garett and I both had boxing gloves which then turned into a very intense boxing match. Honestly, I don’t remember who won that one but it was a fun heart-pounding five seconds. There were moments where we were in each other’s faces shooting until the other fell or jumping from platform to platform hoping to get a shot in while dodging the other’s cannon fire. Our rounds were close and a lot of fun. In the end, he got me 2-1 though it’s hard to tell who got lucky and who had skill. The game is just too fast-paced and so much fun.

Well, we like a good nail-biter. Emily’s valiantly fought defeat brought things down to a decider between myself and Garett. This was going to be interesting as we both had a fair bit of experience under our belts by this point.

So, we did a practice run and I beat him with a fairly comfortable lead. Then I decided to jump off the deep end in our first real match. It was closed but Garett still gave me a significant whooping. I’m putting a certain amount of blame for this on the arena. The level set in Egypt is great for pinging bounceable objects off walls but doesn’t leave you a lot of room to maneuver. Suffice it to say Garett is better in confined spaces than me. I ended up eviscerated and team 2 took the first round.

Thankfully, the second and third rounds gave me teleporters to play with and lots of shooty, explody things. Once I’d mastered the gun that fires buzz saws and stopped decapitating myself with it, and remembered things don’t have infinite ammo I was fairly good. Also, standing in front of someone with a loaded gun when you don’t have a loaded anything is a good way to not breathe.

I’m not taking anything away from Garett. We were toe to toe for the majority of our matches and he was a very tough player. Thankfully, on this occasion, I was tougher and finally beat him two games to one.

So there you have it! Round one of our little tournament ends with team 1 (myself, Emily, and Albert) taking the lead, and Albert didn’t need to do anything other than cheer us on. He’ll be very busy soon though because round two is looming. Join us for the next installment of our little competition where we see Emily and Albert trying to outrun Garett and Madeleine of team 2 (along with a lot of other more dangerous things). Keep your eyes peeled for some brilliantly written reviews on the games we’ve played, too, just in case you fancy a go at any of these titles yourselves.