Ultra Space Battle Brawl is a 2D fighting game with bright pixel art, multiple modes, fun 80s synthwave music mixed with funkot dangdut (Indonesian house music). It also bears a weird similarity to Pong. The game was developed by Mojiken Studio and was released earlier this month. Ultra Space Battle Brawl is incredibly simple, easy to get into, and damn fun to play. Simply hit the story mode, choose a character, and you’re on your way through a series of battles in different locations throughout space!

The game itself is fairly simple. You and your opponent start on either side of the arena. On each side there are one or more targets which are surrounded by weird minion things (they look like chickens with the same hairstyle as the character you’re controlling). You and your opponent smack a ball around which ricochets off the walls and other obstacles on the field in the hopes that you’ll whittle away the minion defenses and break through all of the goal targets. When you do, you win! Win two out of three (or whatever number of rounds you deem acceptable in versus mode) and you win the match! The action is fast-paced, wild, and super fun. 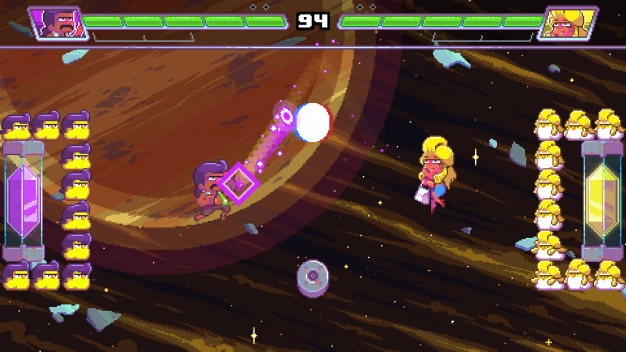 Players can select from one of 10 playable characters, each with different skill distributions (e.g. speed, damage). Each has a unique move – your “ultra” – which has the potential to quickly turn the tide of battle. For example, one character’s special move allows him to very rapidly swing his bat, which can basically decimate your minion defenses if he is able to get the ball between them and a wall. Another character’s ultra allows the ball to be split in two when hit by that player, resulting in double the damage potential! 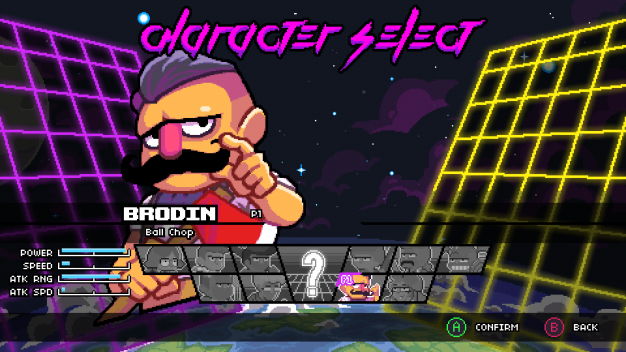 The single-player campaign mode provides each playable character with a little background story for why they’re competing in the Ultra Space Battle Brawl, and then tosses you into a lineup of battles against other NPCs which get progressively more difficult. Playing single player is a great way to learn more about the other characters and their play styles and ultra abilities. There are also occasional bonus stages in between the usual battle lineup where you have to do things like smacking around minions that appear around the field in different places. These segments function as a great way to improve your ricocheting skills. 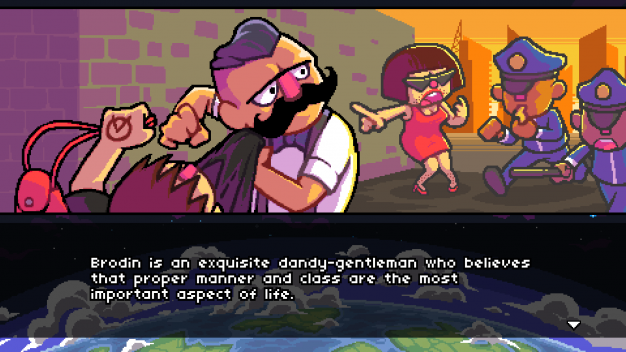 I also took a whack at versus mode, which is even more fun than the story mode because now you can brutalize your loved ones! One of the beautiful things about Ultra Space Battle Brawl is that it’s so unbelievably simple, yet deceptively difficult to master, that pretty much anyone can pick it up and be just as good as the not-quite-beginner in a matter of moments. Unless you’re really striving to be the best player in the world while inviting newbies to play with you, even the newcomer will feel like they’re getting a fair fight. There’s also a co-op mode where you can play in pairs, so there’s that option if you have even more people to play with. 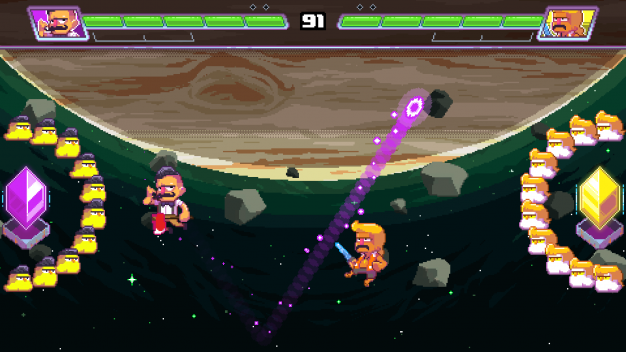 I didn’t know what to expect from this dinky little game, but the graphics are neat, the music is great, the gameplay is solid and it’s good to play alone or with friends. Honestly? If you’re looking for a great way to kill some time, Ultra Space Battle Brawl is definitely worth the $10 USD. Ultra Space Battle Brawl is out now on Steam for PC and also Nintendo Switch.

I tried to make this a five star review. Yes, stars not points; this game is so dinky, it doesn’t really warrant a categorical breakdown, but my editor is nuts for the ten-point scale.