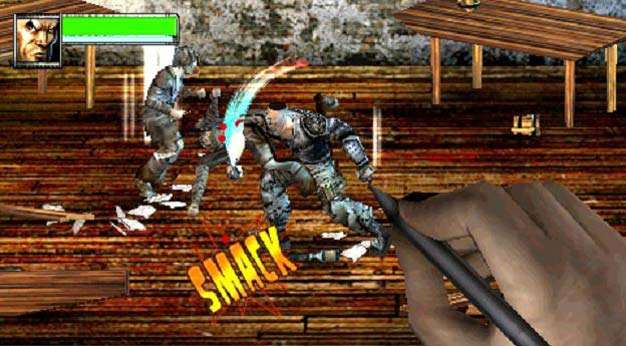 While some studios are shying away from original intellectual properties, others like Dark Horse Comics and Vogster Entertainment are pushing forward. Their new IP Unbound Saga will launch in June this year with simultaneous PSP and comic book efforts. Their goal is to create a lasting new series that will continue and grow far beyond this first effort. Mike Kennedy, the Senior Producer for Unbound Saga, said they “want to blow up the brand as much as possible.”

For now the story focuses on Rick Ajax, a failed wrestler that knows he exists in a comic book, and Lori Machete, who at times is a thief, a spy, an assassin and all around adventurer. However, Kennedy didn’t rule out releasing new characters in the future as DLC or bring other comic characters into future titles. The comic will give more back story and the day to day happenings with Rick’s daytime job as a bartender, but the game follows his epic quest to get out of the comic and square up with “The Maker” once and for all. You see, Rick is tired of being the hero and forced into insane, mutant infested situations and its time to make it stop.

We were lucky enough to get some hands-on time with the PSP game at Comic Con and can see why its been called the spiritual successor to Comix Zone. The story spans 10 episodes with around 120 panels total and the characters will leap to the next panel as if turning the page in a comic. Unbound Saga plays like the classic Streets of Rage, especially when it comes to Rick picking up people for body slams and other wrestling moves. Lori uses more martial arts as well as weapons like poison gas. Players can also pick up items on the ground and throw them at enemies or use them to bash others to a pulp. The ragdoll physics made throwing enemies fun as we watched them bounce around hitting the thugs behind them. Unlike Streets of Rage this first Unbound game is bound for just one player at a time.

There are a few mechanics that players need to learn and use with a little stratergery (yeah Bushisms still work!!). First is that special abilities and attacks can be upgraded through a large skill tree. It would take two to three playthroughs to max everything out, which also helps increase the replay value. Second is that players can switch between Rick and Lori on the fly. Both players are always on the screen with one fighting by your side, except when the story forces you to play as just one. When not being controlled, the other character’s health will slowly replenish, so switching can be a matter of life meter.

Streets of Ragewas great and games like it are always fun, but usually in small doses. Here at least the comic theme breaks the monotony. After clearing a panel of badguys, who explode into little loose comic book pages themselves before fading away, The Maker shows up and draws more to block Rick’s path. Jumping between panels is cool and works just as well here as it did in Comix Zone. It was too loud on the showroom floor to hear a PSP speaker, but we have been assured the music fits and is NOT polka–not that there’s anything wrong with a good polka once in a while. Animated cut sceens were done by Cliff Richards, who is also doing the comic series.

We thought the game was fun, if not a tad nostalgic, and thought that the pick up and play feel fit well with the PSP. When asked why the PSP was chosen Kennedy said, “Sony is really trying to push PSN…especially on the PSP.” He went on to show how much can be saved when developers can put their games directly out there instead of needing a larger publisher and the costs of UMDs and packaging. And what better time than now to go for the PSP. Yesterday Sony proudly announced that the PSP has reached the 50 million unit mark in worldwide sales.