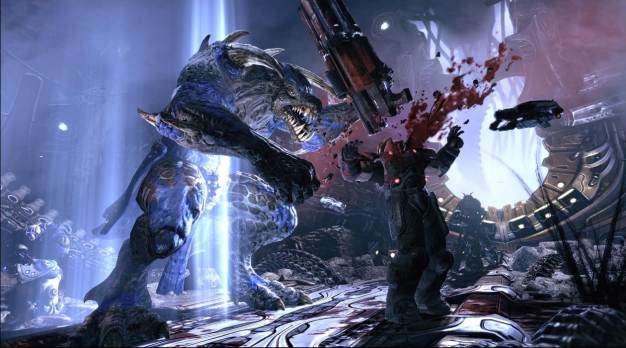 We’re not sure if Midway and Epic releasing a truly large amount of new content will launch Unreal Tournament III back into the spotlight of most gamers (outside of the PC realm of course), but it definitely won’t be hurting anything. The two companies have announced the Titan Pack which will be coming to PC and PS3 on March 5. The 360 seems to be missing out for some reason. The pack is going to contain an absurd amount of content including new levels, new weapons, new vehicles and new characters.

There will be 11 new maps, plus eight maps from the UTS bonus pack that was already released and from the 360 version of the game which had some exclusive maps on it. Not only that but two new game modes will be included, Betrayal mode and Greed mode. Sadly the latter has nothing to do with taking your UT3 character and swimming Scrooge McDuck style in a vat of money, but instead is a “‘tug of war’ style kill points battle.” Betrayal mode is “a cutthroat style of play where alliances and teams can shift fluidly through a match.” Sounds like a lot of friendships will be lost over that one.

The pack doesn’t stop there though, it is truly unreal how much content is being added (cue rimshot). Along with Steam Achievements and Trophy support the update will include new units like the Stealthbender that can turn invisible for brief periods of time and carries plenty of new gadgets to help players frag. There’s also the addition of Titan mutator which will turn any player into a 15-foot rampaging Titan with every power-up in the game applied at the same time once they’ve killed enough opponents in a row. Add two new turrets, two new characters and a plethora of other new ways to rack up the body count and you’ve got a pack that sounds more like an entire expansion. And before explaining all the new content makes this post waaaaay too long, check out the new screens.