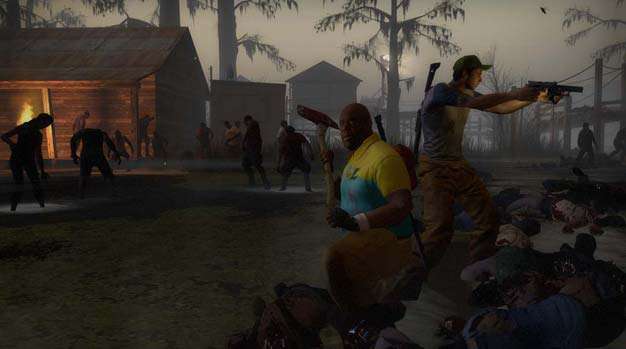 Left 4 Dead 2 is a bit of a mystery to me. While watching Microsoft’s E3 press conference I was blown away to see a trailer for a new L4D game; The first one hasn’t even been out a year, and already a new one has been in the works we find out. Perhaps what shocked me just as much was that L4D2 was playable on the show floor for both the 360 and PC. Something just didn’t feel right. On Wednesday of last week, day two of E3, I had an appointment with Valve and was ready to find out what the deal was. When I got to Valve’s meeting room, I saw that it was really no more than just an L4D2 PC playtesting room. The Valve PR rep sat me down at a computer to try out the new game, and away I went.

After about 15 minutes of play time, I got up and was able to find one of Valve’s brilliant writers, Chet Faliszek. I say brilliant because the man co-wrote Portal. Among the things we discussed was of course the L4D sequel, mainly why is it a sequel and not an add-on for the first game. The answer — the amount of content; L4D2 has four new characters, five new campaigns, and a totally new location.

“When Left 4 Dead ended, the L4D team, instead of wondering off to other projects, was like, ‘I wanna do more Left 4 Dead,” Faliszek said.

So why not make it an expansion pack or some form of DLC? “[..] part of it is we started talking about it and realized how big it was,” Faliszek explained. “[..] all the common infected are replaced because obviously it’s hotter here [..] there’s locational damage on them so you can blow out parts of the stomach, you can blow out arms, and so like all these pieces kinda tied together.”

“In [Team Fortress] you can do these discreet units or a map and it’s a self-contained world. Here it’s just so big that we just wanted to do this entire thing. And one of the other things we wanted to do was make sure that when we release it, its five campaigns. All of them have versus, survival mode, co-op and a brand new multiplayer mode, right out of the gate.”

Another interesting thing of note, Chet told me that the L4D development team approached Valve’s PR about doing another L4D game, not the other way around. With the recent boycott petition floating around it’s fair to say that this is a pretty touchy situation amongst gamers. Though I have to point out, look at Valve’s track record and notice how they have always made their games with the player in mind first above all other things. Are they not allowed to make a sequel to an incredibly successful franchise if they so choose? Or, does Valve see a cow and want to cash it? Tell us what you think.