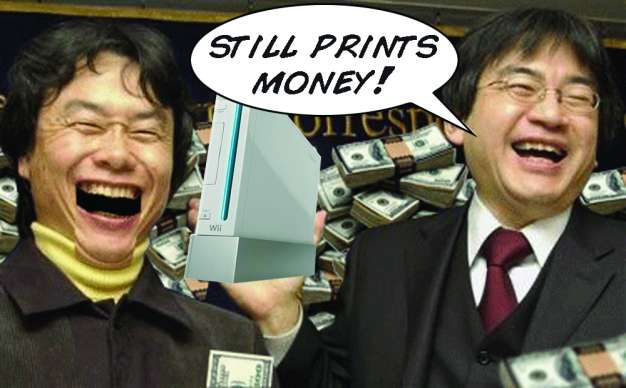 With the second great depression looming on the United States’ horizon, no industry has proven “recession proof,” but the most recent sales data from Vgchartz shows that videogames might just be “recession resistant.” The USA NPD videogame sale figures for the four weeks ending January 31, 2009 will be released on February 12, 2009 at 6:30 PM EST, but according to the numbers already posted at Vgchartz, game companies are off to a surprisingly strong start, especially a certain console maker whose name rhymes with “Nimbendo.”

Miyamoto’s newest moneymaker, the Wii, tops both the hardware and software sales charts, with the DS coming in second. Having moved more than 746,234 of the white wonder boxes, Nintendo’s hardware sales came close to the record-setting level last seen in October 2008, when the Wii sold more than 800,000 units according to NPD USA sales data. While not quite deserving of being ‘shopped into Scrooge McDuck’s moneypit, Sony and Microsoft held their own with an estimated 570,000 PS3, PS2 and PSP machines and 340,000 Xbox 360 machines moved over the course of a month, representing an impressive 50% growth for five of the six major platforms.

As for software sales, Wii Fit continues to dominate a list in which five of the top ten titles are Nintendo-published, with two more third party games for the Wii (RockBand 2, Guitar Hero World Tour) taking their place among the best-selling titles. Diving the remaining spoils are the PS3 and Xbox 360, with the multiplatform Call of Duty: World At War and Gears of War 2 rounding out the chart. Hit the jump for all the number crunching goodness.

To estimate what NPD will report for January 2009 USA figures, multiply the Americas figures below by 0.9.