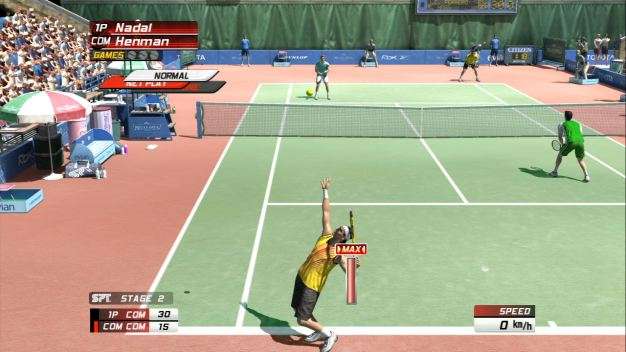 I think that Virtua Tennis holds a sweet place in my heart that elevates it to a far greater level of game than it actually was. This is mostly thanks to it (a.) being a great game and (b.) being on the Dreamcast, which, as I look at the systems currently residing under my television, is duking it out with my NES for “favoritist system EVAR!” In truth I haven’t played a Virtua Tennis game since the death of the Dreamcast, but every time I see a new title come out in the series my heart flutters a little. It just happened when SEGA sent us a press release stating that Virtua Tennis 2009 would be coming to the Wii.

The Wii version of the game, the first ever on the system, will feature all the same players as on the other platforms it is appearing on (360, PS3, PC) plus over 40 courts from around the world and online play. Get ready for more friend coding fun! It seems that the large amount of court games will really be a selling point as they are pushing them as family fun. Strangely the release doesn’t mention anything about “utilizing the uniqe controls of the Wii.” All the better in our opinion as until MotionPlus releases motion controls would just ruin the pinpoint accuracy of the game.