Not too long ago, I downloaded and played through the beta version of Papers, Please, a game created by Lucas Pope. For those you have not played it yet, or even heard about it, Papers, Please is set in 1982 in the fictional communist state of Arstotzka. You take on the role of an immigration inspector who is tasked with deciding exactly who can and cannot enter the country, after the end of a 6-year war with its neighbor Kolechia.

The game is very addictive and a lot of fun. As each potential entrant into the country approaches your desk, you have to make sure they have all the required travel documents, inspect them to make sure they are all valid (by turning to you handy rule book), and finally accept or deny them entry into the country by stamping a large ACCEPTED or DENIED mark on their passport and handing it back.


After stamping the first few passports, you enter a trance-like state where inspecting the documents of the next entrant is almost entirely an instinctual process. Your rule book gets more and more complex as each day passes, however, making the inspection of each entrant’s documents an even more challenging and time-consuming process than it was the previous day.

The progressive difficulty of the game is counterbalanced by how satisfying and addictive the gameplay mechanics can be. To browse through documents, you have to drag and drop them yourself from the entrant’s side of the desk to yours using your mouse. After inspection, you drag his/her passport underneath the stamp, and then click on the stamp itself to accept or deny the entrant into the country. It all sounds so cumbersome, but the game somehow makes dealing with these issues a challenging yet rewarding experience.

Papers, Please is also a thought-provoking game which has an interesting moral twist to it. As an immigration inspector, your character does his job first and foremost to support his family. At the end of each day, you’re presented with a kind of score summary which tells you how much money you made (or lost, if you did a crappy job that day), along with a summary of the health condition of your family members. You’re paid money for each person you allow into the country, but penalized if you’re careless and let someone who has invalid or missing documents through the borders. In my play-through of the beta version of the game, supporting my family felt like as Sisyphean task. I just couldn’t let enough of the right people into the country to make sure I had enough money at the end of the day to get my family some medicine and keep them warm. By the end of my run, which lasted just over an in-game week, most of my family was dead. 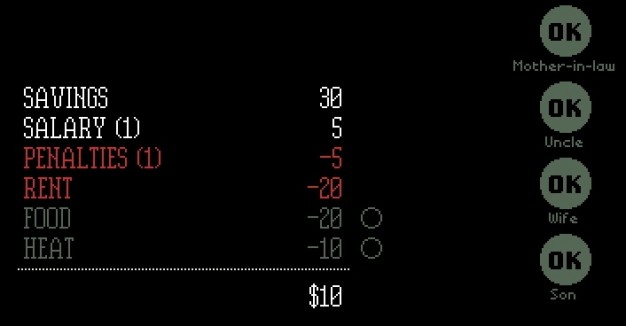 To complicate things even more, every once in a while, you will come across someone who is desperately begging you to let them into the country so they can avoid facing a firing squad back home, or someone whose documents check out yet turns suicide-bomber not more than 10 seconds after crossing the border. In “Experiencing the Banality of Evil in ‘Papers, Please’”, Scott Juster mentions how moments like these in Papers, Please are meant to reinforce the idea that, in real life, and often in the most tragic circumstances, immoral acts are committed when morality falls to the whims of bureaucracy. The rule which denies one person entry into Arstotzka and grants me money to feed my family, is the same rule which sends that person to the death squad back home.

In addition to its overt messages concerning morality within a bureaucratic setting, I think that Papers, Please addresses moral issues in a very unique way. In doing so, it expresses an important idea regarding how and why we confront moral problems and attempt to resolve them in our everyday lives.

To be clear, Papers, Please doesn’t really have a plot. The game does have a back-story and setting which explain exactly what it is you will be doing throughout the game, and establishes exactly why you are doing what you are doing. Don’t get me wrong here, I don’t think that the back-story and chosen setting of Papers, Please are completely arbitrary and interchangeable, because they are definitely meaningful. In one significant respect, they provide the player with a morally-grounded purpose behind inspecting people’s passports. They primarily act, however, as a way of window-dressing the game’s raw gameplay mechanics.

Prior to the start of each day, you are shown newspaper clippings which, when taken all together, do tell a kind of overarching story. All of these references, however, foreshadow some kind of change to either the rule book you will use while inspecting people’s passports the next day, or to some other aspect of the game world which will have some kind of impact upon how you will be doing your job the next day. 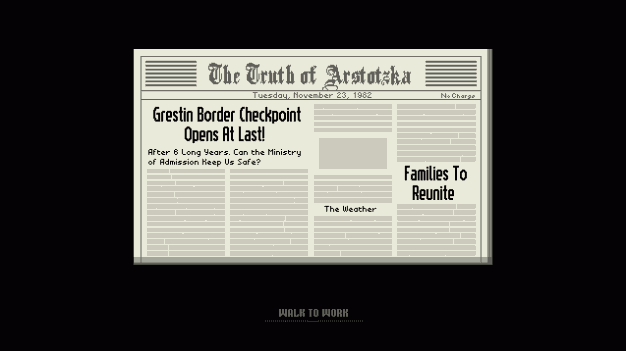 These references therefore act as a kind narrative of the progressive complexity of the game’s mechanics, rather than the development of particular characters or the sequential occurrence of events that stand in some kind of meaningful relation to one another.

In plot-driven morality-based games, such as Heavy Rain, Telltale’s The Walking Dead, or Mass Effect, the mechanics are there, for the most part,  to let the player resolve the game’s moral dilemmas, through his/her engagement with them. They do not play an essential role in allowing the player to understand why a particular situation in the game is morally problematic in the first place. If and when they do, it’s usually not through the player’s understanding of what the mechanics of the game actually are and what they demand of him/her, but rather through an engagement with these mechanics, which instead drives the plot of the game forward and reveals something new about the game’s setting, environment, and/or characters.

Some plot-driven games, however, do weave morality into mechanics which come into play only at specific points in the game. A good example of what I’m trying to say can be found in the recurring encounters with Little Sisters in the original Bioshock. 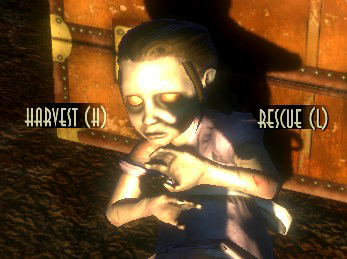 The fact that the game lets me choose between killing the Little Sisters or freeing them, with each choice having its own repercussions and effects upon gameplay and the game world, is a crucial reason as to why these specific encounters are morally thought-provoking in the way they are. If this element of choice was not there, then these encounters would be morally relevant and thought provoking in an entirely different way.

The “No Russian” level from from Call of Duty: Modern Warfare 2 is also an interesting example to consider (although less of a story-driven game than Bioshock) because a huge part of the reason as to why that level was controversial was the fact that engaging with a core mechanic of the game, shooting anyone and anything that moves, was permissible in that level.

Similarly, these situations can be compared to those I find myself in while playing Papers, Please, as someone approaches my desk without an entry permit telling me that if I decide to send them back home they will die. 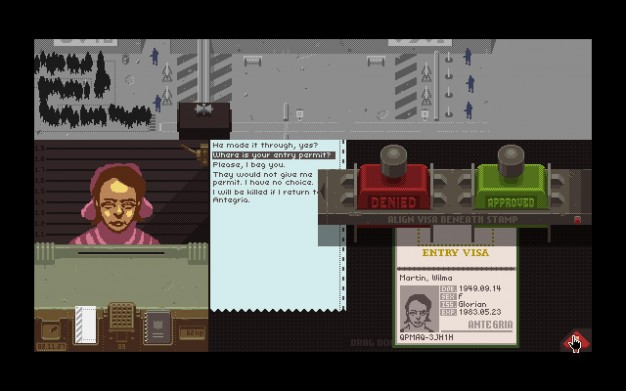 Like the encounters with the Little Sisters in Bioshock, the presence of an element of choice is what places me in a moral dilemma here. In moments like these, it’s a core gameplay mechanic, the decision to accept or deny someone entry into Arstotzka, which has been called into question as a moral compass.

In addition to revealing how and why morality can be compromised within a highly bureaucratic environment, the emphasis on gameplay mechanics in Papers, Please ends up reminding us that, in real life, moral predicaments often arise as a byproduct of our engagement in a system of rules which define the particular environment we are immersed in, and dictate exactly how we can and cannot act within it.

By stripping the game of any kind of pre-determined narrative and emphasizing player involvement through gameplay alone, Pope also reminds us of the the sad reality that we often confront moral issues and attempt to resolve them because we feel a sense of obligation to do so only after our engagement in the practices which define our environment, and our recognition that they are actually the cause of these problems. The game reminds us of just how rarely we actively look for moral problems to solve which arise within a context of unfamiliar practices, or when the connection between our practices and these moral issues is not really that obvious to us.

Papers, Please is a great game, and I highly recommend you download the free beta and give the game a shot. As straightforward as it is, the game is challenging, fun, addictive, and thought-provoking. As always, feel free to share your thoughts on this game in the comment section below.