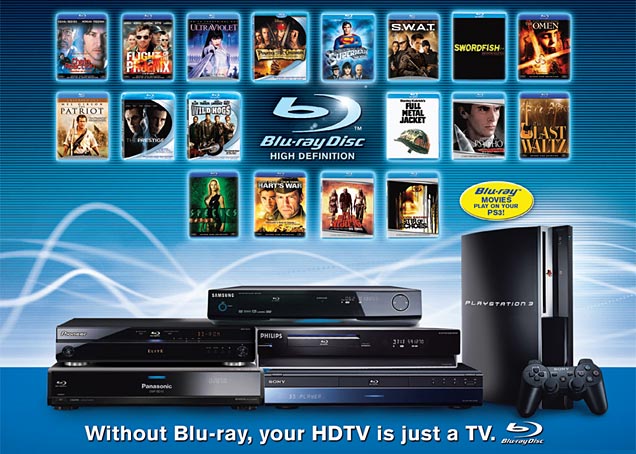 Why should this subject interest us gamers you may ask? Whether we like it or not, our next-gen systems have become more than just new formats to play our favorite games on. They became a battleground for the next generation of media formats. The newest buzz has many speculating that if Microsoft does not offer a Blu-ray player for their Xbox 360 soon, that they will be losing out on sales to the PlayStation 3 in the form of consumers wanting a total package.

So why does Blu-ray even matter? A lot of experts out there have been saying it doesn’t matter what format won, and it’s not worth buying into because downloadable content (DLC) is the wave of the future right? Contrary to what many “experts” have been saying ever since Toshiba threw in the towel on HD DVD, DLC has no hopes in the foreseeable future of knocking Blu-ray off of its hard-earned pedestal.

Many of the sources being quoted in the media have their own vested interests in physical storage media or the video download industry. On the other side of the boat, you have many authors in the media championing this message after being burnt by their own untimely HD DVD player purchases. Lastly, you have the usual group of technology naysayers, those who are always “holding out for the next best thing.” As we all know, but at times forget to realize, when it comes to technology there will always be a next best thing down the road. Holding out on a purchase for 5 years never got anyone further ahead of the curve.

Back when this all started, the HD DVD format lost to Blu-ray the moment Sony announced that they would be including the player as part of the PS3. Many gamers looking forward to such future exclusive titles as Gran Turismo 5, Final Fantasy XIII, Metal Gear Solid 4, among others, were quite content to purchase the system during early release to enjoy HD movie content without any fear of choosing what may become “the losing media format.” The reason why? If Blu-ray failed to take off, the PS3 was still the only video game system that would play the sequels to their favorite games. It was a win-win scenario for the consumer and for Sony.

Now that Sony has won the format war, the war vs. DLC is far on the horizon, contrary to what some would have us believe. Those arguing that DLC is on the verge of scooping the victory out from under Blu-ray obviously are not comparing apples to apples and oranges to oranges. By that, I mean comparing reality to reality. Your average downloaded video pales in comparison side by side with its Blu-ray counterpart in 1080p on a 52” TV. This is not just YouTube quality we are talking about either, even the downloadable video content being offered by Netflix would look a bit grainy when stretched over a 52” TV, though it looks fair enough on a 20” monitor. This is not even to mention that Blu-ray is sporting uncompressed audio, which you can bet would not be available in DLC until long after it became the most widely accepted format.

Fact is we are lucky if the average downloadable video content is in 480i resolution, due to the hurdle of sheer file size. The day that a 1080p quality movie will be downloadable in a reasonable amount of time is far off for most people. Just go to www.apple.com/trailers and download a two minute long movie trailer in 1080p…see how long it takes. The bandwidth infrastructure for this so-called wave of the future to happen does not currently exist, unless perhaps you happen to live on a college campus. Most high-speed internet providers sport much lower bandwidth than they advertise, and even if your cable/DSL provider’s full advertised speed were available, it would still not be enough for the scope of downloading a full-length movie in HD quality within any sort of timely fashion.

Now consider how much hard drive space your movie collection would take up if you were to attempt to store it instead of download each title again every time you wanted to watch it. A season from your favorite TV show in HD quality would likely take the majority of a new 1 Terabyte drive. There aren’t many consumers out there who can afford to buy many of those; buying a disc format such as Blu-ray would end up being a lot cheaper than going the hard drive storage route.

We won’t even go into the appeal that the simplicity of physical media offers to the average older consumer. Not to mention the deliberate impedance being put in place by various movie studios that would like to stall the transfer of their films to downloadable form as long as they can. Look at how much money the music industry has lost out on due to the sudden explosion of readily downloadable music content, and they still have yet to figure out how to keep their industry profitable enough for the future.

Thus, I proclaim that Blu-ray really has won, thanks to convenience. The world of broadband still has a lot of catching up to do among other things. But what do you think? Am I dead on? Awfully wrong? Voice off in the comment section below.