Last year Sony proved that the PS3’s HD upgrades go hand-in-hand with PSP, just as much as they do with PS2. Both the God of War: Origins Collection and port of Metal Gear Solid: Peace Walker displayed that.

It’s a little disappointing, then, that with some six games under their belts before heading to PS3, Ratchet & Clank only bring half of these to Sony’s latest HD update. The Ratchet & Clank HD Collection offers the first three games in Insomniac’s classic PS2 series, but misses out on fourth installment, Gladiator, as well as High Impact-developed handheld spin-offs Size Matters and Secret Agent Clank.

Looking for more bang for the buck on a disc that already offers three great games at a budget price might seem like nit-picking, but it’s a shame that, just like with Jak HD’s omission of Jak X and The Lost Frontier, the more obscure titles aren’t getting any time in the spotlight. This is the perfect chance to do just that.

But that’s my only real complaint with a collection that otherwise faithfully brings the duo’s classic (and arguably best) adventures over to the latest console. Well, other than the need for a Vita version, that is.

The magic of seeing the best of the PS2 in HD has worn off a little since the God of War Collection wowed back in 2009, but the visuals here are surprisingly sharp. It’s the game’s colour palette that does the trick; leafy planets filled with rocky waterfalls occupy one level while the bustling yellows of series staple Metropolis assault the screen in the next.

If you’ve had the pleasure of playing any of the PS3’s games then you should pretty much know what to expect here. The first game obviously shows the dev team getting used to new hardware as a few control blips present themselves, but pretty much everything’s smoothed out in time for the sequel.

As always, the main draw here is guns; guns that turn enemies into pigs, guns that fire swarms of missiles in one shot, and guns that create little decoys of you. This is showcasing an era where Insomniac wasn’t short on imagination, offering some of gaming’s most delightful weapons to create a toy box arsenal that would go on to influence Resistance. 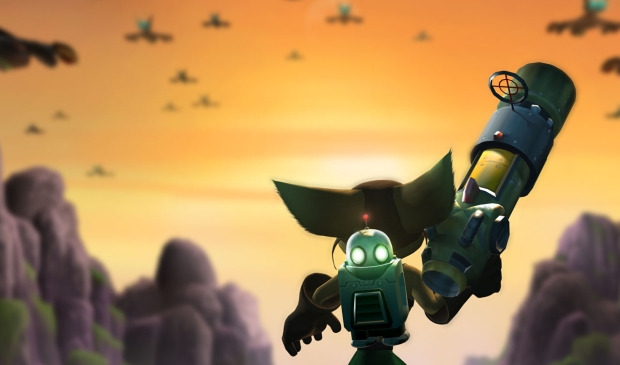 It’s also a reminder of the developer’s knack for humor, even if it takes a game or two to get the writing fully straightened out. This isn’t Portal-level comedy, but an upliftingly light-hearted series that features some of gaming’s most loveable characters.

With three discs you’re looking at over 30 hours of content at a reduced price. Even with those missing games it’s hard to argue against that. And as any fellow trophy whore will know, these HD sets are the ideal place to rack up on easy platinums, which doesn’t change here.

Ultimately, Ratchet & Clank HD is pretty much what you’d expect from the inevitable update. Its failure to include the franchises’ lesser-known titles loses some of its lustre, but this is as good a way as any to acquaint yourself with one of gaming’s most cherished duos.