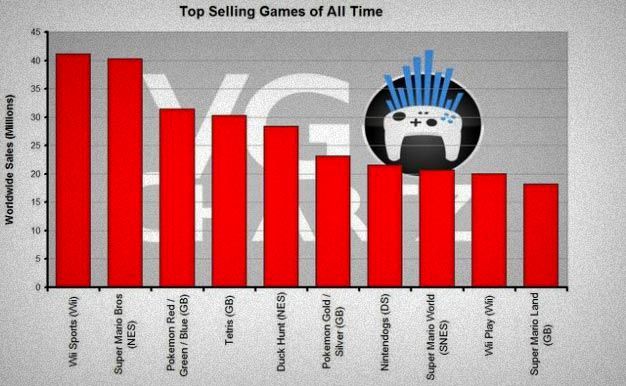 The officially unofficial word is that the original Super Mario Bros for NES has been dethroned as the highest selling videogame of all time. Independent number tracker VGChartz.com puts Wii Sports at over 40.24 million units sold as of December. The family bonding game comes with all Wiis sold except in Japan and South Korea, so this really isn’t much of a surprise. It is interesting that it carried a purchase rate of 45 percent per system sold in Japan without being a bundled game.

The above chart shows the top 10 selling games of all time. Notice that all are on Nintendo systems and remember that ALL of them were at one point bundled with their respective console or with an extra controller. This begs the question: If Nintendo weren’t business, marketing and bundle geniuses, would we have paid full price for half of these games?