I’ve decided to review this game not only as a gamer, but also as a big wrestling fan, a huge 90’s wrestling fan, and a GINORMOUS WWF Wrestlemania 2000/No Mercy for the N64 fan. I’m assuming that is who will potentially be most interested in this game. That means that this review will include several pro-wrestling puns and references, Ooh yeah dig it! That also means that I will give less weight to things like visuals and bugs and more weight to things like nostalgia and gameplay. Do you smell what I’m cooking?

Wrestling Empire gives the nostalgia-fueled player what they want from the opening bell. The Editor option is front and center and the player can easily see some of their all-time favorite characters immediately. Sure, the names have to be changed, but some of the placeholder names will give you a good chuckle (Dick Swagger = Val Venis.) Creating a character is mostly quick and easy, though choosing the color of a garment is particularly obtuse (but also very specific.) Marks will experience no shortage of their favorite moves, taunts and finishers.

Moving on to what is most important “Here, right here, in Wrestling Empire!,” this does indeed scratch the itch of those who were huge fans of WWF No Mercy and the games that came before it (WCW/NWO World Tour, WCW/NWO Revenge, WWF Wrestlemania 2000.) At the heart of Wrestling Empire is gameplay and presentation that strongly resembles the glorious N64 era of THQ wrestling games. 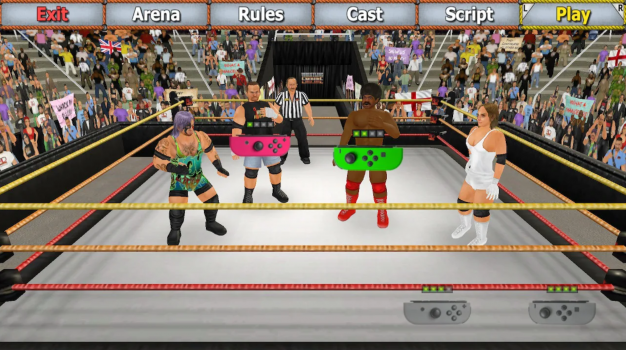 Wrestling Empire is easy to pick up and play; it’s genuinely fun to see the N64 version of all of my favorite wrestlers. “All hell can break loose” with weapons and outside interference, especially when mixing in the different match types. And there is something very satisfying about slowly unlocking a full roster of hundreds of all time classic wrestlers.

There is a story here, but it’s not a particularly good one, and I don’t think it’s trying to be. I suppose it’s still better than Katie Vick… The dialogue is static, allowing for random wrestlers to drop in to most any role and, therefore, they all lack any unique personality. Luckily, the dialogue is filled with lots of pro wrestling jargon and the story beats do include some pro wrestling ridiculousness that will put a smile on all of you “sheep.”

I honestly don’t feel it’s worth going down the road of discussing all of the specific bugs. Bugs and glitches are everywhere, but not worse than old-school gamers would have experienced in a typical N64 game. I’ve personally never experienced any bugs that are game-breaking, nor have I ever experienced anything like a crash. Newcomers may be off-put, but jobbers like myself, who lived through the N64 era, won’t blink an eye.

My biggest issue with the game is that matches descend into chaos when managers are brought into the fray. Those at ringside can freely walk into and out of the ring, bringing weapons with them as they please. There were certainly times when I had “two words” for them. Not only does the interfering character get in the way, but if the player accidentally uses one of these weapons, he or she may earn a DQ. It makes very little sense, though somehow does not ruin the experience all that much. Also, I do wish there were a few more match types. 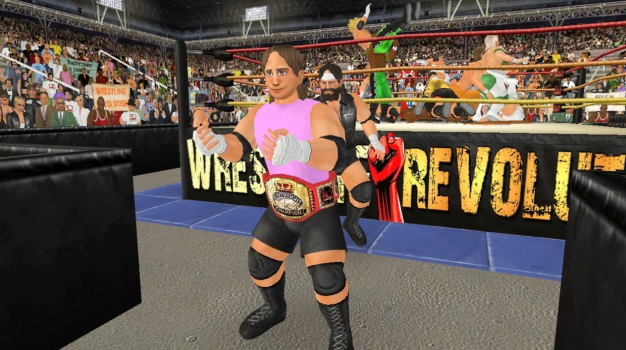 This game puts me in an odd place where I would wholeheartedly recommend this to fans of games like No Mercy. The gameplay is straightforward and fun, it’s awesome to see the polygon versions of all of your favorite superstars and the nostalgia factor is off the chart. If you were a big fan of WWF No Mercy and the ilk, like me, this game is for you. If you think that you’d enjoy an easy to pick up, yet visually simplistic, wrestling game, maybe give this a shot. But if you are looking for a narrative-driving career mode with outstanding visuals and presentation, keep it moving. “And that’s the bottom line, cuz’ Stone Cold said so!”

Does a regular table spontaneously burst into flames at times? Yes. I did not know where to put that in this review, but felt it had a place. “D’Von! Get the tables!”