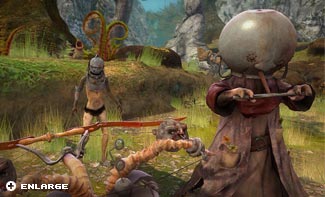 The teaser trailer that developer ACE Team released last week from their first game, Zeno Clash, simply demanded our attention. So much so that we wanted to know more about this magnificently bizarre looking 2008 PC title that no one seems to have heard of. Fortunately, one of ACE’s game designers, Carlos Bordeu, was happy to give us the answers we were looking for regarding Zeno Clash’s release, possible console versions, as well as many others.

To start off, could you say a few words about how ACE Team came to be and the people that work there? The origins of ACE Team go way back when we were a small group of mod developers. We did a few total conversions for different games and after some years we started working in a game development studio, mainly doing casual PC games and Xbox Live Arcade titles. But our dream and passion had always been to be able to have our own studio where we could make our own games and really do something different, so we decided to take the risk and we formed our own company.

You say your team has roots in developing Xbox LIVE Arcade titles, any games we might know? I worked as art & design lead for the IGN Live Arcade game of the year: Assault Heroes… some of us also worked on several other titles (mainly casual games on PC and XBLA)… but nothing related to the style of Zeno Clash.

Back in August 2007, when you announced that you’re using Valve’s Source Engine, the press release mentioned “The first chapter..”. Does that mean you’re planning on releasing Zeno Clash as episodic content or are there already plans for a sequel? This is something we have talked a lot about here at ACE. Zeno Clash is a game on its own and it’s not really an episode like the Half Life episodes. It can be considered a chapter because there is more story and world behind the game, but it has a definitive beginning and ending. It will just leave the story open to other events.

It is also important to mention that this game is not a full 12 hour+ title. It’s a smaller game which is actually very good for us because as a small new studio we can focus on making something completely new and different without having to commit to making a 3-5 year project. With the rising costs and difficulties of game development I think this is a good way for smaller independent game developers to explore new ideas and bring new content to the industry.

As you guys grow, do you see yourselves branching off into the more “epic” lengthy games, or do you feel the shorter games fit not only your economic limitations, but also your artistic vision? I don’t think we have limitations as a studio to make “epic” games since no studios are really independent devs unless they are really well known or big studios. It’s the publisher that funds large scale games for the devs, so it’s not really an economic limitation of our part.

What are your distribution plans – digital/retail/both? Have you secured a publisher yet? Currently, the only plans of distribution are through Steam, but we are looking at possibilities for retail distribution and we do want to have a retail partner. We are already talking with several interested parties.

Since you plan to distribute via Steam, will you be taking advantage of the newly announced SteamWorks system? We’re basically a Source engine licensee so Steamworks doesn’t apply to us in the same way.

Why only PC and not X360/PS3? Could other versions happen somewhere down the line ? All our efforts are being focused on the PC game. We are very interested in bringing Zeno Clash to the XBOX 360 and the PS3. But it’s something difficult to accomplish when you are independent studio, and not because of the development; we have experience working with the Xbox360 and the Source engine is multiplatform. The hard part is getting the game published and having enough resources to build the console version in parallel. We think the game will be successful, so we foresee console ports.

Can you elaborate on the 2008 release a bit ? If nothing more precise, can you say which quarter you’re aiming for ? The release should be somewhere during mid 2008. We have a tight schedule but it’s too early to be more specific.

You’re promising a deep storyline for Zeno Clash. Can you give us some background on it? We know the playable character is Ghat, one of FatherMother’s many children. But is there anything else you can divulge about the nature of the plot, the characters? The story of the game revolves around the conflict between Ghat and FatherMother who is Ghat’s father and mother at the same time. FatherMother is the hermaphrodite parent of many different children who live in the chaotic city Halstedom and his family is a powerful clan. Ghat’s brothers and sisters are not all human-like and the story goes through several locations and even timelines where the player will meet and face very strange and unconventional characters.

We don’t want to spoil much this early, but a thing we have been putting a lot of effort into is that the game will always have something new to surprise with. This is not the type of game where you will see most of what there is to be seen in the first levels and then you just go through the same for the rest of the game.

How many hours of gameplay can we expect? In terms of length we’re aiming at something similar to a Half-Life episode.

Any chance of multi-player and/or co-op? This is a single player adventure only.

The game features a lot of close-quarters combat mixed in with some FPS elements. How much of the game will be of the hand-to-hand variety? Is that the core gameplay mechanic, or is the action more evenly distributed? There will be a good mix of hand-to-hand and “shooting”, but there is a big focus on close combat. I think the melee combat could be considered the core gameplay mechanic because it’s the most unique aspect of the gameplay. We’re still in the process of polishing and implementing a lot of the combat mechanics, but the current build is fun and when we are testing the game lots of times we get caught in the battles.

With such unique characters and environments shown in the teaser reel, it got the attention of a lot of gamers. I’m curious what some of your inspirations were, as far as the art direction is concerned? We have a lot of sources of inspiration, but I think the most important ones at the beginning of the project were John Blanche’s illustrations in Steve Jackson’s “Sorcery” book series, and Hieronymus Bosch’s paintings.

As a new company, do you guys feel like you have more or less freedom to do something “outside of the box”? I think the birth of Zeno Clash is possible because we are an independent studio. I think it would have been very hard for us to push the game’s concept through regular channels because publishers tend to put their resources on safer bets and that is why it’s hard to create new IP’s in the industry. The cost of game development has escalated so much that it’s hard for new studios to build convincing prototypes to sell their concepts and obviously this is not a game we could have sold to someone with just a flashy design document.

Do you think the success of games like Assassin’s Creed, and more specifically BioShock are opening up the possibilities for radical ideas to be executed? Do you think a game like yours could benefit from the windfall that games like these have created? I think that when established developers create new original titles this helps the industry because it gives proof that gamers not only welcome new ideas, but that they can be very successful. This is good not only for new studios, but for developers and gaming in general.

Ok, that’s all we got for now. We appreciate you taking the time and wish you the very best in the development process. Thanks to you. Hope you enjoy our future media releases and the game when it’s finished.