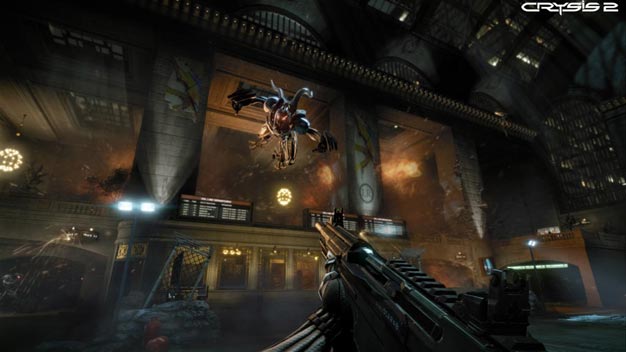 With shooters being released left and right all year long, how’s a newcomer to stand out and squeeze its way into the popular boys club? German FPS expert Crytek may have the answer.

While speaking to That VideoGame Blog at PAX 2010, executive producer Nathan Camarillo said the studio’s upcoming Crysis 2 will fit snuggly between today’s more popular multiplayer games: the modern day and science fiction shooters. The game offers plenty of present day weaponry for fans of the latest Call of Duty games and no shortage of sci-fi themes for Halo lovers.

“We sit in a very comfortable space between an accessible modern military shooter like Call of Duty, Battlefield, Medal of Honor, where have conventional weapons and gunplay, machine guns, urban combat environment,” Camarillo explained. “Then you combine that with the science fiction of the Nanosuit and fighting aliens and everything that goes along with that.

“We’re in a really nice space where we’re different in very fundamental ways but we’re also very familiar in ways that people enjoy.”

Crysis 2 releases in Q1 2011; March 22nd in North America and the 25th in Europe. An Xbox-exclusive multiplayer beta is expected to kick off before year’s end.