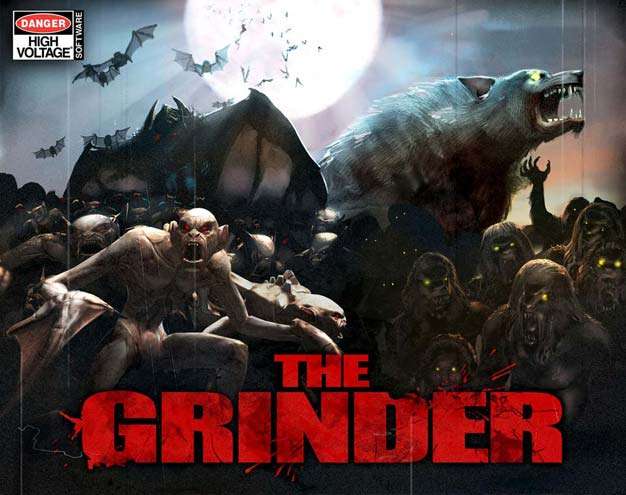 Remember how I came down a bit harshly on High Voltage’s Gladiator A.D., saying that the game had promise but was going to need some work? Well I’m going to make it up to High Voltage by gushing over their second upcoming game, The Grinder. If you’re not a fan of people doing cool things on the Wii you might just want to move away from this article because that’s what is going on here.

The Grinder is High Voltage’s attempt to bring Left 4 Dead to the Wii. Actually, if you ask them, which I did, Left 4 Dead reminded them an awful lot of their game Hunter: The Reckoning Series so maybe it’s just their attempt to bring their own game to the Wii. Either way, what I mean by this is that The Grinder is a four player, online, co-op FPS for the Wii — even in single-player you’ll have AI partners. Yes, it can be done and judging from what I saw it can be done well.

Let’s start with what should be obvious, but probably isn’t. The Grinder looks amazing, and I’m not talking The Conduit amazing, I’m talking now-The Conduit‘s-graphics-are-going-to-be-disappointing-after-seeing-this amazing. We saw just a brief part of a desert level, but from that it was easy to see that High Voltage had taken their engine from The Conduit and done a whole lot more. Guns looked smoother, enemies looked even better and everything just seemed one step above what we had seen before. This makes sense since the guys weren’t starting from scratch this time around, but it was still stunning to see it in action.

It isn’t just the graphical look that is impressive, it’s everything. High Voltage has spent a lot of time trying to make the environments far more destructible than they were able to in The Conduit and it shows as the entire world looks more vibrant than what we’ve seen from The Conduit. Along with this, the team has developed some new tech that lets them put way more enemies on screen. While there were never hundreds upon hundreds of enemies flooding the screen, there was enough to make you sit back and once again be disappointed with what everyone else besides Nintendo and High Voltage is doing with the Wii.

In The Grinder you play one of four characters who live in a world where monsters exist and need to be taken care of. The group of characters goes in and takes care of areas overrun with these creatures. Killing ensues and you shoot things with the same customizable controls that The Conduit features, except now you can do it online with friend in co-op. On top of this over-the-top plot is a grindhouse style theme, much like The House of the Dead: Overkill (if you haven’t bought that yet, go get it) had. Grains roll down the screen every once in a while and it’s got that old film look to it, but it looks good. 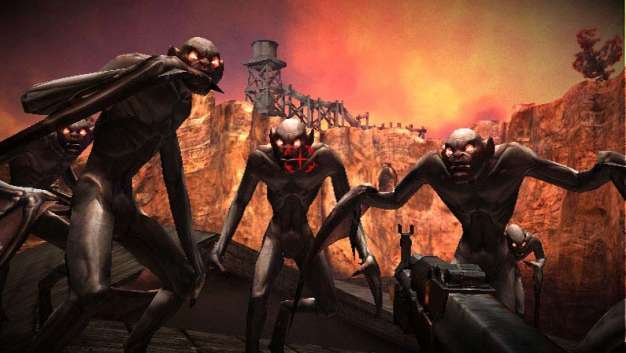 The level we saw featured one character searching through a desert cliff area and killing some creepy vampire/bat things. Along with this we saw a bit of a mini-boss type guy who chased the player around with a hammer/ax thing. He was being used to demonstrate one of The Grinder‘s more unique enemy features; the ability to appear out of nowhere. If you break the line of sight with some enemies they will literally appear behind you, much like the creatures out of horror films. It sounds a little cheap, but looked like it worked when it was played in front of us. The gameplay of the rest of the level looked tight and fast paced and even had a bit of a shooting gallery near the end as the enemies tried to flee.

But really the question is how does the multiplayer play? The answer to that is that I have no clue. We sadly only got to see single-player, and a non-co-op build. Not seeing a game’s biggest selling point is a bit of a downer, but considering how early in production they are it’s pretty understandable. Anyway, it gives me something to look forward to next E3 or whenever High Voltage wants to fly the entire TVGB staff up to Chicago to experience it.