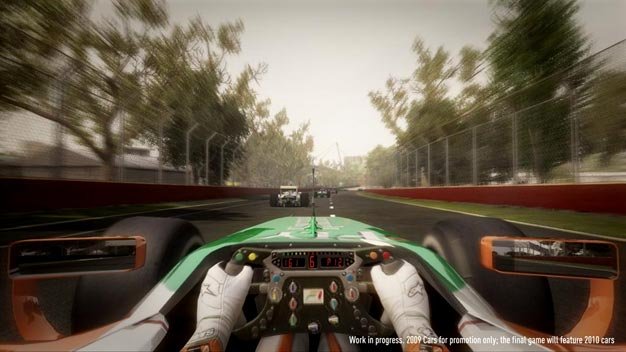 It’s been a long time since an F1 game last revved its engines in HD. Since 2007’s F1 Championship Edition much has changed about the sport. Now, the influx of young, media-friendly stars like Fernando Alonso and Louis Hamilton dominate. With their Pussycat Doll girlfriends and giant multi-million pound yachts, they’ve reclaimed F1’s allure.

But for all formula one’s rejuvenated glamour, the licensed videogames have always been dry, drab affairs. F1 2010 promises to change that.

“Be the driver, live the life” is the phrase used by developers Codemasters to describe the dual elements at the heart of F1 2010. While “Be the driver” refers to what you do in the car, “Live the life” reflects perhaps the most interesting aspect of the game: the F1 circus that surrounds you.

Codemasters have built on their work on GRID and DiRT 2 to add character to the world of racing. Becoming champion now means developing relationships with engineers, agents, your team-mates and the press. It’s not just about the cars anymore.

Putter around the track with little success for a low-ranking team like Force India and you’ll be largely ignored. But secure a surprise grid placing or finish in the points and you’ll be mobbed by the media.

It’s here that you can create your personality, answering questions from a dialogue tree. Want to be an aggressive monster on and off the track? Do it. Or would you rather be a stone-cold killer in the car and an affable interviewee in the paddock? You decide, but be ready to deal with the consequences.

Of course, with the help of your agent you can work your way up to the big teams. But drive for Ferrari and only victory will do, with constant attention and press conferences for podium finishes, success will weigh down upon you. Fail to perform well and the scrutiny will only increase. 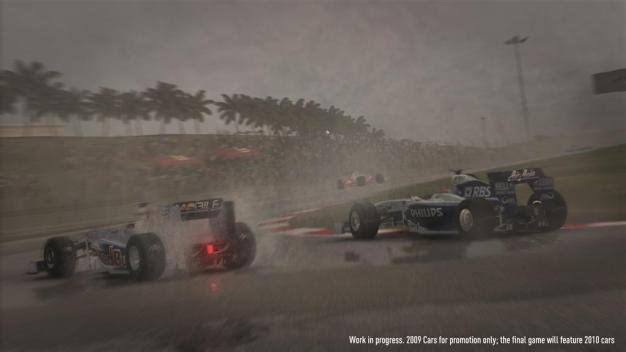 Adding to the pressure is your team-mate, your fiercest rival. Outpace him and you’ll be top-dog, treated to all the new parts and engine upgrades first. Just like the the real sport, the cars will evolve over the course of the season, with research teams and engineers working non-stop to make you faster. Being your team’s top driver could give you an invaluable edge.

This attention to detail and knowledge of the sport carries through into the racing itself. With an experience that is neither pure arcade nor slavish sim, Codemasters believe they can create the ideal combination of depth, realism and excitement.

While F1 2010 features realistic representations of all the critical tyre, engine, track and tactical elements of the sport, we did more overtaking in the Alpha-build than you’d see in a month of Monacos.

At the heart of each race is the track. Not merely an inch-by-inch recreation of their real-life counterparts, the tracks in F1 2010 each have their own distinctive character, responding and evolving over the course of the 3-day Grand Prix.

Practice on Friday and the track will be “green.” But as cars rip down straights and tear through the corners, they leave a layer of rubber, aiding your grip along the racing line. It’s therefore imperative that you stick to it as closely as possible. When you’re travelling at 200mph in a car that weighs less than Keira Knightley, you need as much grip as you can get. 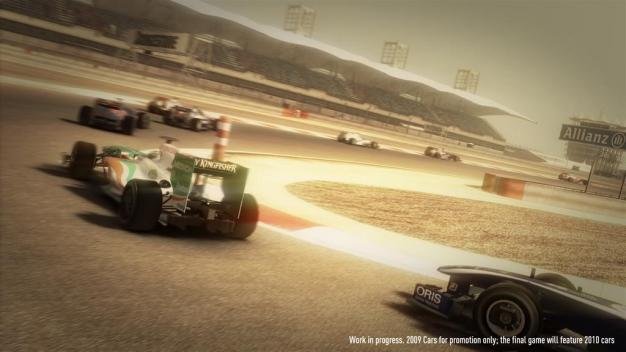 Leave the racing line and you’ll not only suffer from reduced traction, but your tyres won’t like it either. As they age they’ll marble, blister and wear – more evidence of Codemasters’ dedication to getting the details of the sport just right.

The elements also play a massive role. Codemasters are calling their weather technology the most advanced ever seen in a racing game. F1 2010 recreates the topography of each circuit to such a level that even famously waterlogged spots will be just as treacherous as in real life. It’s persistent too, so a wet practice day on Friday can mean a soggy track on race day, even if the sun is shining.

Racing in the wet is a thing of atmospheric beauty. Charge around on the tail of another car, as water plumes from its rear tyre, drenching your rain-specked visor, and you’ll know you’re in a fight.

Even at this early stage, F1 2010 is gearing up to be a champion. But with just 25% of the game completed, the checkered flag is some way off. If Codemasters can make good on their promise to blend F1’s on and off-track thrills then F1 2010 could be spraying the champagne come September.